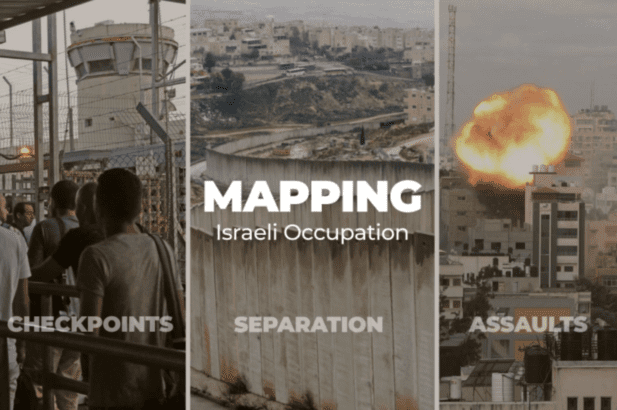 The world sees Israel’s occupation of the West Bank and Gaza; Israel calls the lands “disputed”; Israel is pretty much the only one “disputing” the existence of the occupation

Israel and Hamas have declared a ceasefire, but that’s not the end of the dispute between Israel and the Palestinians – not by a longshot. These illustrations tell the story of how, even without “war,” Israel’s military controls every aspect of Palestinians’ lives – through occupation and settler colonialism.

For the fourth time in 13 years, Israel has launched a major military offensive on the Gaza Strip. In its latest assault that began on May 10, at least 220 Palestinians, including 63 children, have been killed in Gaza. At least 12 people have died in Israel, including two children.

According to Human Rights Watch, Israel is “committing crimes against humanity of apartheid and persecution” against the Palestinians.

In the following series of graphics, Al Jazeera describes why Israel’s military occupation of Palestine remains at the core of this decades-long conflict and how Israeli colonialism shapes every part of Palestinians’ lives. 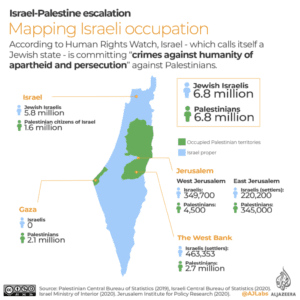 [To see a complete list of Palestinians and Israelis killed since 2000, visit Israel-Palestine Timeline.] 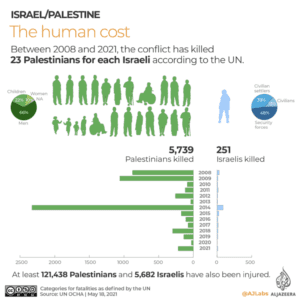 Before the British Mandate for Palestine, Jews made up approximately 6 percent of the total population. From 1947 to 1950, during the Nakba or “catastrophe”, Zionist military forces expelled at least 750,000 Palestinians and captured 78 percent of historic Palestine. The remaining 22 percent was divided into the West Bank and Gaza Strip.

During the 1967 war, Israeli forces occupied all of historic Palestine and expelled a further 300,000 Palestinians from their homes. Today, Israel continues to force Palestinians in Jerusalem and the West Bank from their homes and lands, which are often taken over by Jewish Israeli settlers.

[To read more about forced expulsions of Palestinians, read this, this, this.] 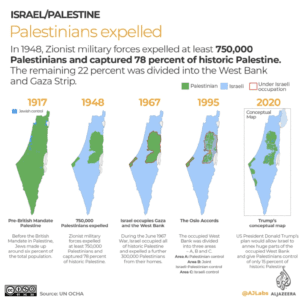 There are about 1.6 million Palestinians with Israeli citizenship living in present-day Israel. In 1948, during the creation of the State of Israel, Zionist forces attacked major Palestinian cities and destroyed some 530 villages. These Palestinians, who are also referred to as “1948 Palestinians”, are descendants of those who managed to remain in their towns and villages or were internally displaced.

[For more on the Nakba – when Palestinians were exiled and their villages destroyed, read this, this, this.]

Despite holding Israeli citizenship, rights groups have documented several dozen Israeli laws that discriminate against Palestinian citizens across a wide spectrum of issues, including education, housing, political participation and due process. They are treated as second and third-class citizens.

[To read about Israel’s discriminatory laws – part of its apartheid system – check out this resource.] 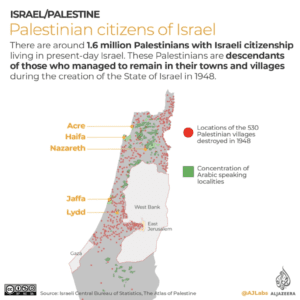 Jerusalem is an ancient city holy to Muslims, Christians and Jews. West Jerusalem has been Israeli territory since 1948 with Jews in the majority. East Jerusalem, which houses the Old City of Jerusalem including the Al-Aqsa Mosque compound, is Palestinian majority and was occupied by Israel in 1967.

In 1980, Israel passed the Jerusalem Law, claiming that “Jerusalem, complete and united, is the capital of Israel”, in violation of international law, which states that the city should be administered by the UN for its importance to the three Abrahamic religions.

Although Israel claims Jerusalem as its undivided capital, the realities for those who live there cannot be more different. More than 140,000 Palestinian residents of Jerusalem have been physically separated from the city by a 700km concrete wall, which Israel started building in 2002. 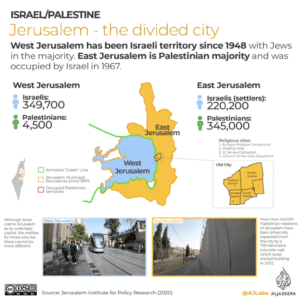 The West Bank is a kidney-shaped area on the west bank of the Jordan River. Between 1993 and 1995, the first direct Palestinian-Israeli peace agreements were signed between the government of Israel and the Palestine Liberation Organization (PLO). This led to the formation of the Palestinian Authority (PA) – an administrative body that would govern Palestinian internal security, administration and civilian affairs in areas of self-rule, for a five-year interim period.

On the ground, the occupied West Bank was divided into three areas – A, B, and C.

Area A  (18 percent) – Under Palestinian control – initially comprised 3 percent of the West Bank and grew to 18 percent by 1999. In Area A, the PA controls most affairs.

Area B (22 percent)  – Under joint Israeli-Palestinian control – represents about 22 percent of the West Bank. In both areas, while the PA is in charge of education, health and the economy, the Israelis have full control of external security, meaning they retain the right to enter at any time.

Area C  (60 percent) – Under Israeli control – represents 60 percent of the West Bank. Under the Oslo Accords, control of this area was supposed to be handed over to the PA. Instead, Israel retains total control over all matters, including security, planning and construction. The transfer of control to the PA has never happened. 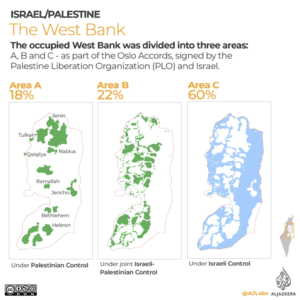 Israeli settlements are Jewish communities built illegally on Palestinian land. Today there are between 600,000 and 750,000 Israeli settlers living in at least 250 illegal settlements (130 official, 120 unofficial) in the occupied West Bank and East Jerusalem.

Israeli settlements are illegal under international law as they violate the Fourth Geneva Convention, which bans an occupying power from transferring its population to the area it occupies.

Despite being outside of Israel proper, these settlers are granted Israeli citizenship and receive government subsidies that significantly lower their cost of living. In contrast, Palestinians living in the West Bank are subject to Israeli military law. 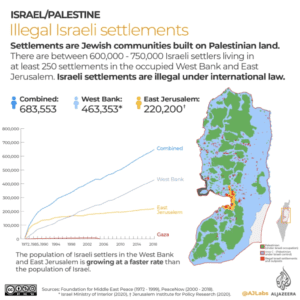 There are more than 700 road obstacles across the West Bank, including 140 checkpoints. These checkpoints severely limit Palestinian freedom of movement. While Palestinians may have to wait for hours at these checkpoints and travel along segregated road networks, Israelis can travel freely on their own “bypass roads” which have been built on Palestinian land to connect illegal Israeli settlements to major metropolitan areas inside Israel.

About 70,000 Palestinians with Israeli work permits cross through Israeli military checkpoints on their way to their workplaces every day. They work beyond the Green Line inside Israel due to the high unemployment rate in the Palestinian territories – a byproduct of the 54-year Israeli occupation. 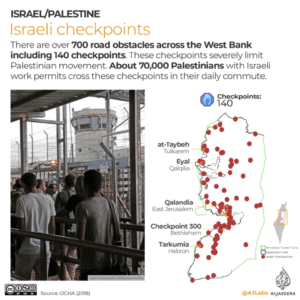 Since 2002, Israel has been constructing a wall that stretches for more than 700 kilometres (435 miles). The concrete barrier is one of the most powerful symbols of the Israeli occupation of Palestinian land.

The wall, which reaches up to eight metres (26 feet) high, cuts deep into Palestinian territory and has resulted in the confiscation of large swaths of fertile Palestinian land, the ghettoisation of Palestinian towns and villages, and has cut off thousands of Palestinians from social services, schools and farmland.

Israel says that the wall is for security purposes. However, rather than following the internationally recognised 1967 boundary, known as the Green Line, 85 percent of the wall falls within the West Bank. 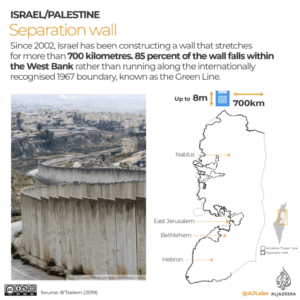 The Gaza Strip has been under an Israeli sea and air blockade since 2007. Since 2008, Israel has waged four wars on the Palestinian territory, killing thousands of people, mostly civilians.

Bordered by Israel and Egypt on the Mediterranean coast, the Gaza Strip is about 365sq km, about the size of Cape Town, Detroit, or Lucknow. It is one of the most densely populated areas in the world, and due to Israel’s continuing occupation, has been described as “the world’s largest open-air prison”.

Israel’s blockade has cut off Palestinians from their main urban centre, Jerusalem, which hosts specialised hospitals, foreign consulates, banks and other vital services, even though the terms of the 1993 Oslo Accords stated that Israel must treat the Palestinian territories as one political entity, not to be divided.

[For more on the blockade of Gaza, check out this, this, this.] 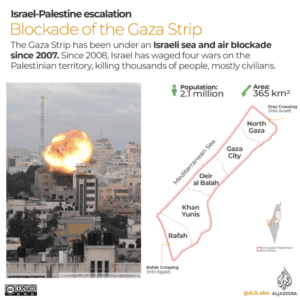 Nearly 70 percent of Gaza’s residents are refugees. About 1.4 million refugees live in eight refugee camps around the Gaza Strip.

[For more on Palestinian refugees in Gaza, go here, and view this video.] 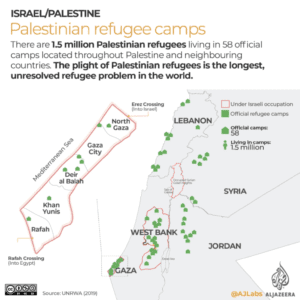 Since 2007, following Hamas’s rise to power, Israel has waged multiple attacks and four wars on the Gaza Strip. In 2008, Israel launched its first major assault on Gaza, which lasted 23 days. Referred to by Israel as “Operation Cast Lead”, 47,000 homes were destroyed and more than 1,440 Palestinians were killed, including at least 920 civilians.

In 2012, Israeli forces killed 167 Palestinians, including 87 civilians, in an eight-day assault dubbed “Operation Pillar of Defense” by Israel. The death toll included 35 children and 14 women.

During the assault, dubbed by the Israelis as “Operation Protective Edge”, about 11,000 Palestinians were wounded, 20,000 homes were destroyed and half a million people displaced from their homes.

[Read more about the effects of Israel’s attacks on Gaza here, here, here.] 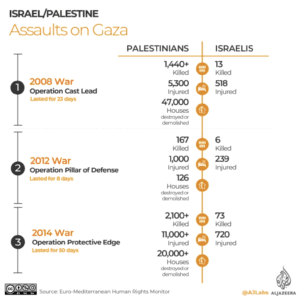