You Are Here: Home → When your village becomes a “firing zone” – that’s ethnic cleansing

When your village becomes a “firing zone” – that’s ethnic cleansing 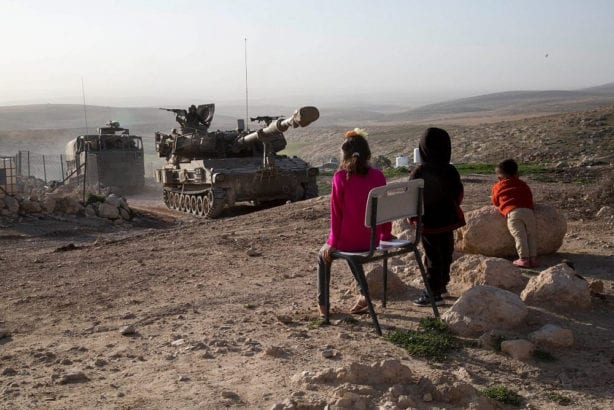 Ethnic cleansing by another name: “firing zone.” (Pictured: Children in Jinbeh, a Palestinian village in the occupied West Bank, watch as the Israeli army conducts a drill, February 3, 2020.)

In order to intimidate Palestinians into leaving their own land, Israel declares various areas of the West Bank “military firing zones.” It’s one of many strategies for ethnic cleansing and “Judaization.”

The first shell woke us up at 2 a.m. It was a formidable blast. The room’s metal door shook and the smell of smoke filled the air. I got off the mattress. The explosion was so close, you could hear the soldiers downstairs yelling: “Yalla, keep going. Quick.”

Another shell exploded. The Israeli army was conducting a massive training exercise near Jinbeh, a small West Bank village in the Masafer Yatta area of the south Hebron Hills, home to around 150 Palestinians.

The lights in the houses across the village went on. A few frightened residents rushed outside. When silence fell, Hamdan, who was sleeping beside me, said: “That’s it, I think it’s over. Let’s go back to sleep.”

But then there was another blast. The windows rattled, dogs were howling, my body tightened up — and on it went until 4 a.m. None of Jinbeh’s resident got any sleep that night.

The following morning, we discovered a large number of military equipment down in the valley. Thirty tanks and a convoy of heavy trucks piled with shells were climbing up to the village, flattening the narrow dirt road. One by one, the tanks drove past the dozens of families and children who were standing outside, tired from the night before, and in complete shock.

One grandmother who was born in Jinbeh in 1942 told me that she had never seen anything like it. The army has been conducting military training in the area for decades, she said, but not like this. They had never arrived with tanks all the way up to people’s homes.

In 1980, the Israeli army declared the area as Firing Zone 918, even though 12 Palestinian villages, including Jinbeh, resided there long before Israel was founded in 1948. The army’s goal: displace the Palestinian residents.

As the grandmother was talking, one of the tanks crashed into the stone gate of the house next door. One of the children said he was afraid. Another tank driver waved hello to a young girl dressed in purple, and she waved back. A third tank drove into someone’s yard — its driver most likely got confused along the way.

Another tank veered into the old stone house of 60-year-old Ali. The driver, who looked around 19, was embarrassed. An officer with a grey beard clapped his hands in contempt and yelled: “You loser, is that how you keep the route?”

Ali got closer and saw that the tank had knocked down large rocks that were now blocking the entrance to his building. The driver didn’t move an inch. The officer yelled again: “Snap out of your shock and run out to get tow cables immediately.”

The tanks continued past the other buildings, but Ali remained outside his house. He asked his son to help him drag the rocks out.

Ali, too, was born here in Jinbeh. He told me that he worked as a construction worker in Israel his whole life, mending structures and roads. In Kibbutz Be’eri. In Nahal Oz. Those were his words.

Ali said he has four brothers, all of whom left Jinbeh over the past decade. They abandoned the village they were born in because of Israel’s policies, because of Firing Zone 918, he remarked. He explained that the army is preventing them from paving roads and is refusing to grant them building permits, or let them connect to water and electricity.

Jinbeh is one of more than 200 Palestinian villages in Area C of the occupied West Bank, over which the Israeli military has full control, that are systematically denied building permits — even though the land is privately owned by the residents.

The army preserves only the old stone houses in the village, like Ali’s. Everything else — the clinic, the school, the soccer field — can be demolished at any moment. It’s a violent policy; a way to pressure people into leaving their private land. This is also why the army declared this area a firing zone, even though it rarely trains here: to compound the pressure.

In 1999, under Prime Minister Ehud Barak’s leadership, Israel issued evacuation orders against the residents of Jinbeh and the other villages in the area, on the claim that they live in a firing zone. But the goal of Judaizing the area can be traced back to the 1967 Allon Plan, created by then-Labor Minister Yigal Allon. It was the Labor Party’s blueprint for settlement-building in the occupied Palestinian territories.

It is important to stress that these are villages that have existed for many decades. The residents have no way of building legally because the Civil Administration, the arm of Israel’s military responsible for governing Palestinians in the occupied West Bank, denies more than 98 percent of permit requests filed by Palestinians in Area C. To even discuss this issue in terms of legal compliance is absolutely ridiculous, since the law is clearly based on ethnic bias.

Jinbeh’s residents petitioned Israel’s High Court on the basis of a very logical argument: if they are sitting on their privately-owned land, how can the state expel them on the claim that the area is a firing zone? The state argued that while Jinbeh’s residents indeed live in that area, they only stay there for part of the year during certain seasons. Therefore, since the village is not their “permanent residence,” the army can declare the area a firing zone and kick out the inhabitants.

This is false. But even if it were true, it’s still their land, their home.

More than 20 years have passed since the petition was filed, and it keeps getting dragged on from year to year without a ruling. But on the ground there is a ruling: slow displacement.

The Civil Administration comes here every month to demolish homes and infrastructure while refusing to grant building permits, and people eventually give up and leave. But this year, the High Court judge presiding over the case is retiring, which means he has to issue a ruling over the next few months and determine whether the state can expel all the inhabitants.

This is the context behind the military exercise. This is why, after years of not training in this firing zone, the army decided to conduct a drill in close proximity to people’s houses. It’s obvious that ahead of the ruling, the state wants to strengthen its presence in the area.

Prior to the exercise, the military pledged not to enter people’s land or interfere with their daily routine. And yet, soldiers and tanks entered agricultural land several times, and the entire drill — from the shell explosions at night to the invading tanks the following morning — severely upended the lives of Jinbeh’s inhabitants.

There were also those who were very pleased with this exercise: the settlers. The South Hebron Hills Regional Council congratulated the IDF for the drill, writing in a message that increased military training “is one of the ways to increase governance, strengthen control, and enforce law and order in the area.”

Increasing governance, meaning, amplifying Israel’s pressure to expel local communities like Jinbeh, that live in areas the state wants to Judaize. Israel is currently focusing on three West Bank areas: the Jordan Valley, south Hebron Hills, and an area known as E1, which connects East Jerusalem to the West Bank. There, Israel systematically denies building permits to Palestinians in order to force them to leave.