You Are Here: Home → Israeli soldiers break the silence about midnight invasions of Palestinian homes 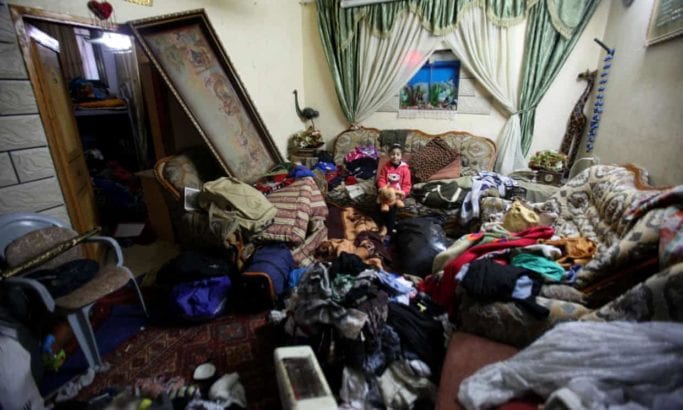 The aftermath of a home invasion at Balata refugee camp in Nablus, West Bank, on January 3, 2017.

“The overarching goal [of each home invasion] was to instill a sense of persecution among the Palestinians.” “It’s a rolling trauma.” So say Israeli soldiers, as they look back with regret on the acts they carried out, night after night, at the behest of their state.

Their testimonies are compiled in a new human rights report from Breaking the Silence, Yesh Din and Physicians for Human Rights, “A Life Exposed: military invasions of Palestinian homes in the West Bank.”

At night, while the household sleeps, my team gets ready outside. One person knocks on the door, and almost immediately after, another breaks in. We enter quickly, with force, weapons drawn. Some of us have painted our faces, others are not concealed. Someone gathers the family and locks them in a room.

There is shouting. Broken Arabic and rapid Hebrew, and vice versa. “Quickly, quickly, your papers!” Items are moved, sometimes breaking. One of us photographs the rooms or sketches in a notebook. Hours pass, sometimes days. Then we leave, on our way to the next house.

Cut. That’s as far as my memory goes. Like a spectator at a movie hastening to sink into the next scene, I never imagined what goes on in that house as soon as we leave.

If you like symbolism, you can find it easily enough in the military lawbook, in the clause permitting the invasion of homes. Clause No. 67 of the Order Regarding Security Provisions states:

An officer or a soldier so authorized in general or in a specific instance is authorized to enter, at any time, any place…

Indeed, since 1967, since we captured the West Bank, our soldiers are sent on a nightly basis to invade the private homes of endless numbers of families. No injunction is necessary: The idea of judicial oversight would make any young platoon commander or sergeant laugh. The pretexts for invading the private realm of subjects/residents are many and myriad. In fact, they are limitless.

A search, an arrest, observation or mapping: These are the common categories. But in fact, anything will do. Even the need to stop for a rest in the middle of a village, or the perennial need to demonstrate one’s presence. “The overarching goal was to instill a sense of persecution among the Palestinians. These weren’t my words; they were screened or written in briefings we received,” said one of the dozens of soldiers and officers who testified before Breaking the Silence.

These testimonies have been collected in a comprehensive report we are publishing this week in collaboration with the human rights groups Yesh Din and Physicians for Human Rights. The army has many terms for the incessant home invasions, and perhaps there is no other topic that captures and showcases the occupation as they do. This is small-scale occupation, the essence of the control of a civilian population in a nutshell. The most routine measure is also the most invasive one. It rattles. It is unjustified.

I’d like to dwell for a moment on that fuzzy term, “mapping.” This is the military term for invasions that document the layout of a home and all its occupants. It may involve photographing the house and its inhabitants (including minors), photographing or registering identity documents or other details such as phone numbers, a sketch of rooms and entrances.

It almost always happens in the middle of the night, between midnight and 5 A.M. Since “mapping” requires moving throughout the house, the occupants must be concentrated in a room or two, under guard.

Which family homes are selected for mapping? All of them. Every single one. “We were told in advance that they were not involved in anything. People who are not involved in terror, innocent,” said one witness, a first sergeant in the Duvdevan undercover unit.

One captain said: “There was no one there who needed to be questioned, nothing related to hostile activity or anything posing a risk. You enter a house only in order to check it and you map it – how many rooms there are – and move on to the next house.” Another officer, a major, said: “It was completely arbitrary, I could choose any house I wanted to, like testing the wind, licking a finger and raising it to see which way the wind blows. No directives were handed down.”

At the other end, where my memory ends and my imagination refuses to pick up the thread, the invasions are experienced differently. This is no mission that has to be carried out, certainly not a heroic one, but a routine of exposure and invasion. It’s a rolling trauma.

“I see them coming to destroy and ruin. They are frightening, with their covered faces and weapons,” says Asra Abu Alia from the village of al-Mughayyir to a team from Physicians for Human Rights.

“I can’t do the housework and I have no control. I’m kicked out of my house while my enemy is inside, breaking things and hurting my children, and I can’t do a thing,” says Hind Hamed from Silwad.

A message for progressive Israelis

Usually, I don’t think that soldiers who “break the silence” should read our reports. Their testimonies are published so that people who weren’t there will learn from them what was done in their name. But this time I’m turning to you too, asking that you read this report, the most comprehensive one ever written on this topic, so we can complete the missing piece in this saga.

And perhaps, who knows, it will be of interest to our brothers and sisters now demonstrating against the prime minister on Jerusalem’s Balfour Street.

You, who have recently experienced unwarranted detention, police brutality and the intolerable discrepancy between what you experienced and the mendacious official statements published in the media – try and take one step further and imagine how you would feel on the day it was decided, God forbid, that your houses and your nights were fair game. Maybe, one may hope, imagining such images will lead to the beginning of tikkun.

[Read the full report from Yesh Din and Physicians for Human Rights here.]

Breaking the Silence is “an organization of veteran soldiers who have served in the Israeli military since the start of the Second Intifada and have taken it upon themselves to expose the Israeli public to the reality of everyday life in the Occupied Territories…Our work aims to bring an end to the occupation.”

Yesh Din is “an Israeli organization registered as a non-profit in Israel…Yesh Din was established in 2005 and has since worked to protect the human rights of Palestinians living under Israeli armed forces’ occupation. We view the occupation as a main source of the violation of the human rights and therefore seek to end it.”

Physicians for Human Rights works around the world: “We use the power of science and forensic medicine to establish a fact-based record of human rights abuses. We enable front line human rights defenders to expose violations and hold perpetrators accountable. We use our authoritative voice to protect human rights and end impunity for perpetrators.”