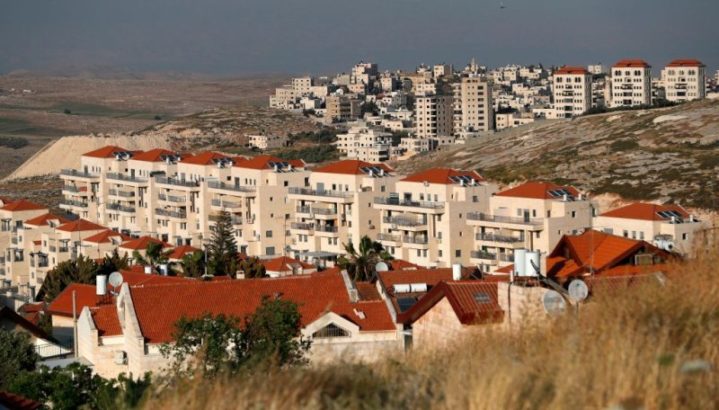 Photo from May 14, 2019 of the Israeli settlement of Neve Yaakov in the northern area of east Jerusalem and the Palestinian district of Hizma (background) in the West Bank. (Photo by AHMAD GHARABLI)

The latest UN report states that Israel’s “civilian settlements” in occupied territory are a breach of the Fourth Geneva Convention and a “war crime” under the Rome Statute. “The world should take the necessary steps to collectively construct a list of effective countermeasures…”

By Robert Fisk, reposted from CounterPunch

He’s a very tall man with bright eyes and a broad smile, and he holds out a great paw when he greets you. But Michael Lynk is no gentle giant.

He may teach human rights law at the Western University in London, Ontario, but as the UN’s special rapporteur on human rights in the occupied West Bank and Gaza, he has to endure the fury of Israel and its acolytes abroad – not least in his native Canada – and, two years ago, even the enmity of his own country’s foreign minister.

In his latest UN report, he reminds readers that the creation of Israel’s “civilian settlements” in occupied territory is a breach of the Fourth Geneva Convention and a “war crime” under the Rome Statute. So you can see why the 67-year old Lynk, a labour lawyer by training, has been having a tough time since his appointment to the voluntary, unpaid UN post three years ago.

When Lynk was appointed special rapporteur, Stephane Dion, then Justin Trudeau’s foreign minister, spotted that UN Watch, a pro-Israeli lobby, had called Lynk “antisemitic” – the usual slur for anyone who criticises the actions of the Israeli government – and suggested that he be forced to resign. Dion soon lost his foreign minister’s job and his career went downhill.

Lynk’s went in the other direction. He became a gadfly to all who stand accused of breaking international law in the Middle East. Hamas is certainly not spared in his report; he accuses the Islamist militia in charge of Gaza of “beatings, arbitrary arrest and detentions, and torture and ill treatment” of hundreds of Palestinian protestors. But the opposition to him wasn’t about his even-handedness.

Dion took these shoddy arguments [from UN Watch] and used them to re-tweet his opposition to my appointment,” Lynk told me. “I would have thought a former academic would have looked at my writings before saying this – but I guess he was just the ‘politician Dion’. I always find it surprising that someone could be deemed radical for insisting on the functioning of international law.”

Lynk rather disingenuously told me he’s just “a stodgy absent-minded law professor with two kids” – which may or may not be true – but in his report, he is far from stodgy in his attacks on the decades of Israeli occupation.

Try this paragraph, for example: “No occupation in the modern world has been conducted with the international community so alert to its many grave breaches of international law, so knowledgeable about the [Israeli] occupiers’ obvious and well-signalled intent to annex and establish permanent sovereignty, so well-informed about the scale of suffering and dispossession endured by the protected [Palestinian] population under occupation, and yet so unwilling to act upon the overwhelming evidence before it…”

Reading this and subsequent paragraphs in his 23-page report, it’s clear that Lynk not only writes the truth; even more dangerously, he knows how to write. Eloquence is only rarely discovered in the UN’s house of cards.

The Israeli government has not even replied to Lynk’s requests to visit the Palestinian lands occupied since 1967 – most of his first hand-witness accounts are acquired in Amman or via video-conference between Jordan and Gaza – but he concentrates not so much on the wilful suppression of the Palestinians but on the moral question of accountability.

Here he is, for example, on Israel’s failure to account for its exercise of power: “The enemies of accountability are impunity and exceptionalism,” he writes, “…Those who maintain that they are exempt from the directions of our international legal and diplomatic order not only defy the rule of law, but they also fail the test of political realism. For no country can sustain for long its standing and influence among the community of nations if it asserts special arguments forbidden to others … Impunity anywhere is a danger to justice everywhere.”

Israel, Lynk adds, “has rightly assessed that the international community – particularly the western industrial nations – has lacked the political will to compel an end to its impunity.” He even quotes the Israeli journalist Gideon Levy, who wrote that “no country is as dependent on the support of the international community as Israel, yet Israel allows itself to defy the world as few dare”.

What Lynk calls the “occu-annexation” of Palestinian territories is “endlessly sustainable without decisive international intervention”. He suggests – and here is the nub of the matter – that the world should “take the necessary steps to collectively construct a list of effective countermeasures … Should the [Israeli] occupying power remain unmoved”, the range of “targeted countermeasures would be escalated.”

This sounds to me very like sanctions; the ghost of the boycott, divestment and sanctions movement hovers over these words, although Lynk makes no reference to it. The real message of his report, however, seems quite clear: this impunity must end.

But we all know that the Lynks of this world, and the old UN donkey, will have no effect on the Trumps and the Kushners and their fantasy “deal of the century” which impoverishes the Palestinians into compliance and destroys any last hope of self-determination.

There will be no Palestinian state. And if Trump is re-elected next year, Israel may indeed claim ownership of all the land between Jerusalem and the Jordan River, and that will be the end of “Palestine”.

It might also – if this is an apartheid state with no votes for the Palestinians – be the end of a “democratic” Israel too.

Robert Fisk is a long time reporter on the Middle East. He writes for the Independent.