You Are Here: Home → Gideon Levy: Israel’s massacre of family is a war crime

Gideon Levy: Israel’s massacre of family is a war crime 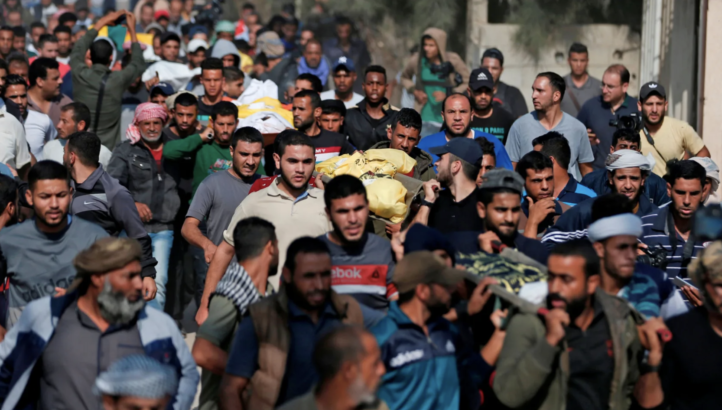 Palestinians attend the funeral procession of members of the al-Sawarkah family who were killed overnight in an Israeli airstrike on Deir al-Balah, Gaza, November 15, 2019. Credit: AFP

Had the IDF wanted to, it could have known exactly who was inside the shack it targeted in Gaza. But it didn’t care, and now a little girl is left alone in the world.

Anyone who bombs houses from a fighter jet in the middle of the night without checking who is inside is a war criminal. Whoever claims they did not intend to kill the nine members of the Palestinian al-Sawarkah family is trying to mislead and wash their hands of it, but their hands are not clean. They are dripping with the blood of innocents.

Maybe they did not intend to murder nine people in their sleep – five of whom were children and among them two infants – but they certainly did not do everything in their power to not harm them. No excuse will serve to justify the actions of the Israel Defense Forces, the Israeli intelligence and of course the Israel Air Force pilots.

The audacious statements by Southern Command head Maj. Gen. Herzi Halevi are an outstanding example of apathy and the loss of humanity: “Such things can happen,” he said innocently. Maybe his statement was a reference to one made by former IDF Chief of Staff Dan Halutz, who said that “it’s like a light bump to the wing of the plane” when he was asked what he felt when he dropped a bomb that killed innocent civilians.

Not a word of guilt, not a sentence expressing regret, no acceptance of responsibility, no apology. Of course there’s no point in talking about compensation, because the army doesn’t see those who died as important. The IDF is the most moral army in the world, and Hamas and the Palestinian Islamic Jihad are terrorist organizations. And those who kill nine helpless civilians sleeping in their own beds in their own home – what should they be called?

What else needs to happen so that Israelis begin to understand that their so beloved and admired IDF is a brutal army that has lost all of its inhibitions and that Gaza is not a target bank. That an army that invented a wanted man who never existed in order to justify the killing of a family is a sick army. That it’s impossible to strike Gaza with fighter jets without killing innocent people. That there’s not a single place in the densely populated enclave without civilians who don’t have any shelter for salvation, no rocket alerts sirens and no Iron Dome defense systems. That Gaza is not just a hornet’s nest and home to terrorist compounds, but first and foremost a horribly crowded home to miserable people subject to the Israeli occupation that has never ended in the Strip.

Fourth and fifth generation refugees, who Israel imprisoned 13 years ago in the largest cage in the world and expects them to sit quietly, surrender and throw rice at the planes bombing them and at the fence that imprisons them.

The revelations that keep one from sleeping reported by Haaretz’s Yaniv Kubovich on Thursday join Kubovich’s November 15 report, describing the chain of events in Deir el-Balah in their entirety: An unbelievable reality in which the army bombs targets without checking what, and more importantly who, is inside.

Now it is no longer just a mistake, now it turns out that not checking is routine. Pay attention to the hair-raising phrasing used in statements issued by the IDF Spokesperson’s Unit: “Incriminating the house,” as if the house can be incriminated. “Validating the incrimination,” as if it is a bus pass, and of course “target bank.” Whoever sees a disaster-stricken place as a “target bank” cannot avoid killing sleeping infants.

The notion that the IDF’s Intelligence Corps, which knows the color of the underwear of every Iranian nuclear scientist in Fordow, doesn’t know to check who is inside a shack in Deir el-Balah before bombing it is of course ludicrous. If the army had wanted to, it could have known exactly what and who were in the meager shack. But it simply wasn’t important enough for the IDF. First you drop a JDAM smart bomb on a tin shack in a ‘fire and forget’ attack, and then you check.

But this turned out to be a forgettable, unimportant and uninteresting incident. Most Israelis didn’t hear about what happened on their behalf in Deir el-Balah, and they don’t care. Save Haaretz, the Israeli media almost didn’t report on what happened on the day after the attack. Readers of the free daily Israel Hayom did not hear that the army killed nine people, while the readers of the mass-circulation daily Yedioth Ahronoth needed to work hard to find the article. Such a massacre is not appropriate for the front page of the former “national paper.” In any case, the military correspondents, most of them the most grotesque in the Israeli press, were busy describing the IDF’s combat fitness championship.

“It was a simple target, where civilians were not supposed to be,” explained the army’s propaganda mechanism. And once again the Arabs are to blame for their own deaths. They shouldn’t have been there. And where should they be? In the sea? In the air? “We act meticulously,” said Halevi, giving lying a bad name. “Black Belt” is the name the army gave the operation in Gaza, more daring than ever before, with a black flag waving over it.

And what about Nariman? Who cares about Nariman? Nariman al-Sawarkah is a 10-year-old girl from the shacks who didn’t have a present or a future. On the night of November 14, 2019, Israel Air Force pilots killed her mother, father, three brothers, her uncle, aunt and two little cousins. Nariman was left alone in the world. The head of the Southern Command said such things can happen. Such things need to be brought before the International Criminal Court in The Hague.