You Are Here: Home → NYT investigation concludes Razan Al-Najjar’s death was unnecessary, may be a war crime 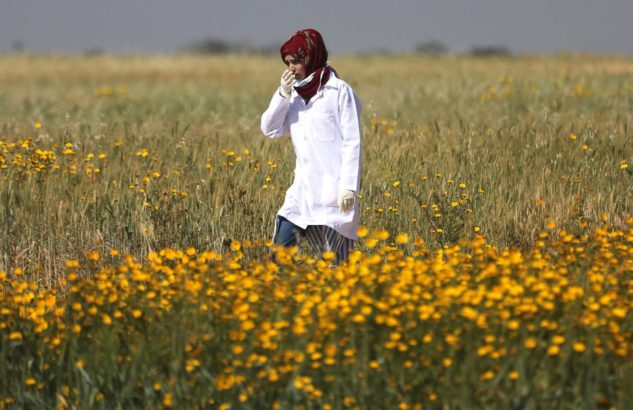 Rouzan al-Najjar, 20, was killed by an Israeli sniper on June 1 while she was treating the wounded at protests at the Gaza border. Credit: Ibraheem Abu Mustafa/Reuters

Razan Al-Najjar’s death by sniper last June was briefly newsworthy; she was briefly demonized by Israel, then the world forgot about her.

But the NYT chose to investigate, examining 1,000 photos and videos, interviewing experts and over 30 eyewitnesses, and piecing the event together using Israeli 3-D software.

The conclusion: the shooting should never have taken place – no one was endangering Israeli soldiers or the border, and medics were in plain view – and Israel has done little to decrease the frequency of these incidents.

Her death is at best reckless, at worst a war crime.

A young medic in a head scarf runs into danger, her only protection a white lab coat. Through a haze of tear gas and black smoke, she tries to reach a man sprawled on the ground along the Gaza border. Israeli soldiers, their weapons leveled, watch warily from the other side.

Minutes later, a rifle shot rips through the din, and the Israeli-Palestinian drama has its newest tragic figure.

For a few days in June, the world took notice of the death of 20-year-old Rouzan al-Najjar, killed while treating the wounded at protests against Israel’s blockade of the Gaza Strip. Even as she was buried, she became a symbol of the conflict, with both sides staking out competing and mutually exclusive narratives.

To the Palestinians, she was an innocent martyr killed in cold blood, an example of Israel’s disregard for Palestinian life. To the Israelis, she was part of a violent protest aimed at destroying their country, to which lethal force is a legitimate response as a last resort.

Palestinian witnesses embellished their initial accounts, saying she was shot while raising her hands in the air. The Israeli military tweeted a tendentiously edited video that made it sound like she was offering herself as a human shield for terrorists.

In each version, Ms. Najjar was little more than a cardboard cutout.

An investigation by The New York Times found that Ms. Najjar, and what happened on the evening of June 1, were far more complicated than either narrative allowed. Charismatic and committed, she defied the expectations of both sides. Her death was a poignant illustration of the cost of Israel’s use of battlefield weapons to control the protests, a policy that has taken the lives of nearly 200 Palestinians.

It also shows how each side is locked into a seemingly unending and insolvable cycle of violence. [Note: this statement incorrectly presents the issue as a conflict between equals with equivalent violence on both sides; in reality Gazans are participating in a predominantly nonviolent, unarmed protest against a state with one of the best-equipped armies in the world.]

In life, Ms. Najjar was a natural leader whose uncommon bravery struck some peers as foolhardy. She was a capable young medic, but one who was largely self-taught and lied about her lack of education. She was a feminist, by Gaza standards, shattering traditional gender rules, but also a daughter who doted on her father, was particular about her appearance and was slowly assembling a trousseau. She inspired others with her outward jauntiness, while privately she was consumed with dread in her final days.

The bullet that killed her, The Times found, was fired by an Israeli sniper into a crowd that included white-coated medics in plain view. A detailed reconstruction, stitched together from hundreds of crowd-sourced videos and photographs, shows that neither the medics nor anyone around them posed any apparent threat of violence to Israeli personnel. Though Israel later admitted her killing was unintentional, the shooting appears to have been reckless at best, and possibly a war crime, for which no one has yet been punished.

For the Israel Defense Forces, she was a nightmare of a victim: a photogenic symbol of nationhood, youth and compassion.

On March 30, the protests’ first day, Ms. Najjar became the youngest of three volunteers tending to the wounded, and the only woman.

To the young men in skinny jeans and T-shirts hurling rocks at Israeli soldiers, she seemed to appear beside them almost as fast as they fell, bandaging burns, splinting fractures, stanching gunshot wounds, offering encouragement, sometimes hearing last words.

Journalists noticed. Practically overnight, she became a fixture of news reports, with a growing social-media following. “Everybody knew her,” said another medic, Lamiaa Abu Moustafa.

Others cowered when Israeli soldiers fired at them. Not Ms. Najjar. “The gunshots we hear will not harm us,” she told a colleague. The implication: You won’t hear the one that kills you.

She inspired other women to become medics, despite social conventions in this deeply conservative Muslim territory that reserve dangerous work for men. “I wanted to become like Rouzan, brave and strong and helping everybody,” said Najwa Abu Abdo, a 17-year-old neighbor, explaining her decision to volunteer.

Things seem to be quieting down at the fence.

An Israeli soldier looking across at where Ms. Najjar stands now might see a man waving a Palestinian flag aloft, a few straggling protesters ambling around, and a cluster of medics helping a protester on the ground recover from tear gas. No one in the area is doing anything menacing. The tear gas is doing what it is meant to: making the use of lethal force unnecessary.

Suddenly, there is another gunshot.

Mohammed Shafee, a medic, sees things “fly into my body.” He’s sprayed in the chest by small bullet fragments.

Mr. Abo Jazar perceives an explosion on the ground, then screams in pain. He’s grazed in the thigh.

Behind them, Ms. Najjar reaches for her back, then crumples.

Ms. Najjar is picked up by protesters she had treated just a few minutes ago. As they carry her off, blood pours from her chest.

An ambulance races Ms. Najjar to a triage tent, where she is deposited in the “red zone” for trauma cases.

Ms. Najjar takes her last breath even before she is rushed to a nearby hospital, where she is pronounced dead at 7:10 p.m.

To Shoot or Not to Shoot

Three medics down, all from one bullet. It seemed improbable.

But The Times’s reconstruction confirmed it: The bullet hit the ground in front of the medics, then fragmented, part of it ricocheting upward and piercing Ms. Najjar’s chest.

It was fired from a sand berm used by Israeli snipers at least 120 yards from where the medics fell.

The Israeli military’s rules of engagement are classified. But a spokesman, Lt. Col. Jonathan Conricus, said that snipers may shoot only at people posing a violent threat, like “cutting the fence, throwing grenades.”

To deliberately shoot a medic, or any civilian, is a war crime. Israel quickly conceded that Ms. Najjar’s killing was unintended.

“She was not the target,” Colonel Conricus said. “None of the medical personnel are ever a target.”

But no Israeli soldiers reported accidental shootings. After-action reports said snipers aimed at four men that day and hit them all, the army said.

The Times found the first, third and fourth of those protesters, each shot in the leg exactly when and how the army said they were. But The Times could not corroborate the army’s description of the second person it said was shot, which matched the time Ms. Najjar was killed.

Even if the man was a legitimate target, there remains the question of the medics standing behind him.

Former Israeli and American snipers said it would be reckless to shoot if anyone who was not a legitimate target could be put at risk. Reckless killing can also be a war crime.

A senior Israeli commander told The Times in August that 60 to 70 other Gaza protesters had been killed unintentionally, around half the total killed at that point.

Yet the Israeli army’s rules of engagement remain unchanged, the military says.

That alone may constitute a separate violation of international humanitarian law, experts say: After enough civilians have died, commanders have a duty to make changes to ensure that they aren’t needlessly targeted.

The large number of accidental killings, and Israel’s failure to adjust the rules of engagement in response, raise the question of whether they were a bug or a feature of its policy.

Colonel Conricus said that not all those killed unintentionally had been shot unintentionally. Sometimes soldiers had aimed at the legs of people they considered to be legitimate targets, he said, but killed them instead of wounding them.

Israel seems content to say that protecting its border is a messy business. “Unfortunately, yes,” said Colonel Conricus, “in a situation like that, accidents happen, and unintended results happen.”