You Are Here: Home → Israeli High Court: Palestinian homes “too close to the wall, must be demolished” 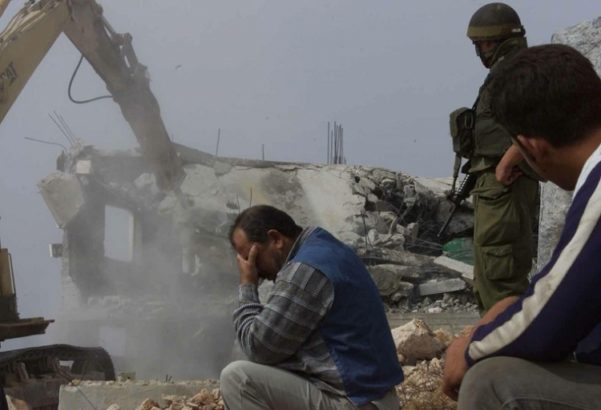 Palestinians built homes; years later Israel built a wall. Now the homes must be demolished because they are too close to the wall.

According to the Israeli Committee Against Home Demolitions (ICAHD):

Since 1967 when the Occupation began in East Jerusalem, the West Bank and Gaza, nearly 50,000 Palestinian homes and structures have been demolished – displacing hundreds of thousands of Palestinians and affecting the livelihoods of thousands of others. Combine this with the 600 Palestinian villages that were demolished when the state of Israel was established (www.zochrot.org) creating 750,000 Palestinian refugees (3/4 of the population), and its ongoing demolition policy within the state of Israel itself, the figure exceeds more than 100,000 Palestinian homes demolished since 1948. This is a conservative figure because multiple level homes and apartment blocks count as one unit and it does not include the number of self-demolitions which is a growing phenomenon done because Israel issues a bill for the demolitions which many Palestinians cannot afford to pay

Palestinian homes are demolished for various and sundry reasons: the land they own has been declared by Israel “agricultural land” or “open green space;” they have no building permit (which the Israeli authorities refuse to grant Palestinians); the slope of their land is adjudged as “too steep;” their houses are too near settlements or Israeli-only highways (although the houses were there first); out of collective punishment for some action the punished people had nothing to do with; the “clearing” of vast tracts of land for military/security purposes; destruction for the sake of expanding roads, settlements and the “Separation Barrier;” houses “cleared” to make passage safe for settlers or for other security purposes; homes representing “collateral damage;” and more.

Sixteen apartment buildings, home to more than 100 Palestinian families, will have their homes destroyed by Israeli authorities in Jerusalem after a ruling Sunday by the Israeli Supreme Court allowing the demolition.

The Israeli Annexation Wall, as it is known to Palestinians, illegally confiscates hundreds of acres of Palestinian land and annexes it into Israel, in direct violation of international law and signed conventions.

According to the Palestinian Wafa News Agency, the Israeli Supreme Court dismissed the appeal which was filed by Palestinian residents against the demolition of 16 apartment buildings in Wadi al-Hummus area of Sur Baher neighborhood, southeast of occupied Jerusalem.

Wafa reporters said that Hamada Hamada, the head of Wadi al-Hummus Committee, told them that the buildings slated for demolition are located in areas classified as Area A, under the full control of the Palestinian Authority, where building permits are obtained from the Palestinian Ministry of Local Government.