You Are Here: Home → Ha’aretz | How Israel Invented Its Exclusive Claim Over Jerusalem

Ha’aretz | How Israel Invented Its Exclusive Claim Over Jerusalem 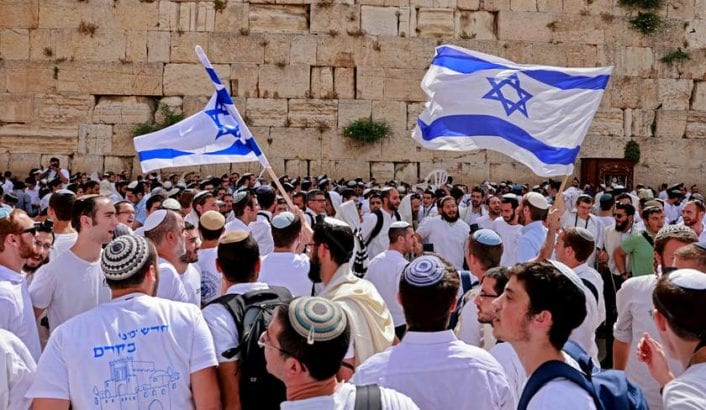 As Israel marks Jerusalem Day, Jewish men wave Israeli flags at the Western Wall, the holiest site where Jews are allowed to pray, in the old city of Jerusalem (Credit: MENAHEM KAHANA - AFP)

The Zionist movement, until relatively recently, never regarded Jerusalem as the Jewish people’s ‘eternal, unified’ capital. Now, Israel’s nationalists are willing to set the Middle East ablaze for the sake of Greater Jerusalem

By Seraj Assi, reposted from the Israeli newspaper Ha’aretz

As a Palestinian who was born in Israel, I’ve come to understand that while violence is all too real, its roots, or the ‘historical’ motives offered, are often invented.

The brutal reality of Israel’s violence against Palestinians in Jerusalem should not obscure the fact that the centrality of Jerusalem in the Israeli national imagination, let alone the Palestinian imagination, is a relatively recent invention.

The sharp irony is that the early Zionists never actually regarded Jerusalem as integral to their national enterprise, but as a spiritual center.

Nowhere was Zionist apathy towards Jerusalem more manifest than in the writings of Theodore Herzl, father of political Zionism. Herzl did not hesitate to express his disregard for Jerusalem, even at a time when the majority of its residents were Jewish.

“When I remember thee in days to come, O Jerusalem, it will not be with pleasure,” he wrote, upon his only visit to Palestine in 1898. It’s no wonder the First Zionist Congress, which met in Basel in 1897 to discuss Herzl’s Jewish state proposal, had passed over Jerusalem in silence.

Disenchanted with Jerusalem, Herzl dreamed of founding the future Jewish capital in northern Palestine. He believed that Jerusalem would be a major obstacle to the creation of his Jewish state and that Jewish ownership of Jerusalem’s holy sites could jeopardize his entire plan for Jewish settlement in Palestine. Herzl also feared that the Vatican would oppose any form of Jewish political presence in Jerusalem. He was willing to give up Jerusalem in return for international recognition of Jewish sovereignty over other parts of Palestine.

In fact, Herzl was the first to propose a plan to declare old Jerusalem an international city. In “Altneuland,” he wrote that Jerusalem belonged to all nations as a multicultural and spiritual center. He even proposed to turn the Old City into a multinational museum.

Herzl envisioned Jerusalem as a utopian city where state affairs are “banned from within these walls that are venerated by all creeds,” and where “the old city would be left to the charitable and religious institutions of the all creeds which then could amicably divide up this area among themselves.”

The early Zionist movement, which took its name from one of Jerusalem’s ancient names, was ready to give up Jerusalem as a prelude to building the future Jewish state. By excluding Jerusalem from their original plan, the Zionist founders hoped to avoid international outrage, clashes with Muslim and Christian communities, and divisions between secular Zionists and the Orthodox Jewish community of Jerusalem.

The original Zionist policy was therefore to keep a low profile toward Jerusalem. Unlike the British, who made Jerusalem the country’s capital under the mandate, the early Zionist movement built its headquarters far from Jerusalem, in central and northern Palestine. There was little nationalist shudder in the Jewish Yishuv in 1908, when the Palestine Office, headed by Arthur Ruppin, opened its doors in Jaffa instead of Jerusalem.

Following suit, prominent Zionist organizations like the Jewish National Fund invested their money away from the holy city, focusing on communal and cooperative settlements, such as the kibbutz and the moshav. Priority was given to agricultural settlements like Petah Tikva and Rishon Lezion. Even the building of the Hebrew University faced strong opposition from Zionist leaders, such as Arthur Rupin, who feared the project would hamper settlement activities.

Following in the founders’ footsteps, the pioneers set their eyes on Tel Aviv, the locus of the Zionist enterprise in pre-state Palestine, hailed by Jewish newcomers as “the new Israel.” Having conceded to the idea of international control of Jerusalem, many Labor Zionists began to entertain the idea of declaring Tel Aviv as the future Jewish capital. After all, the city was better suited for its nationalist vision, socialist spirit, and agrarian revolution.

As for Palestinians, it was also in Jaffa, not Jerusalem, where their national aspirations were set, it being Palestine’s beating urban heart and vibrant economic and cultural center.

Neither party wanted Jerusalem, except maybe the British, who, in the words of Prime Minister David Lloyd George, wished to proclaim the city “a Christmas gift for the British people.”

And yet few Israelis today seem to realize that the image of Jerusalem as the eternal and united capital of the Jewish people was a relatively recent invention.

Indeed, few remember that day in November 1947, when the UN General Assembly passed its historic resolution to partition Mandate Palestine between Arabs and Jews, ultimately leading to the creation of the State of Israel. [Editor’s note: the partition plan was never adopted by the Security Council, and therefore had no force of law. Israel was created through a war of ethnic cleansing.] The plan, which provided for two states — one Jewish, one Arab — excluded Jerusalem from the future Jewish state. Owing to its unique status, Jerusalem was to be governed by a “special international regime” administered by the United Nations.

And yet the Zionist leadership embraced the plan almost without hesitation. Celebrations swept the quarters of the Jewish yishuv in Mandate Palestine. The following year, Israel, emboldened by the partition plan, declared its independence, and not long after, the new state was recognized by a majority of United Nations member states, led by the United States.

It is also worth remembering that Jerusalem was declared the capital of Israel only 18 months after the establishment of the state. And when the city was divided between Israel and Jordan after the 1948 war, the young Jewish state chose to divert its energy elsewhere, building its coastal cities, like Haifa and Tel Aviv, into prosperous commercial zones.

Meanwhile, East Jerusalem and the Old City remained securely in Jordanian hands for two decades, before Israel seized them in 1967 and declared Jerusalem as its “complete and united capital” in 1980.

The irony is that while the early Zionist establishment was ready to relinquish Jerusalem to build the Jewish state, the current Israeli leadership seems to be relinquishing the Jewish state for Greater Jerusalem, where Palestinians constitute nearly 40 percent of the city’s population, with thousands living beyond the separation barrier in East Jerusalem.

By annexing East Jerusalem, Israel is rapidly headed toward a one-state reality which, sooner or later, would culminate in a Jewish minority ruling over a Palestinian majority in an apartheid-style regime.

The history of the early Zionist movement in Palestine is nearly forgotten today, but its lesson is still alive: Jerusalem “belonged to all of its nations and creeds.”

Seraj Assi holds a Ph.D. in Arabic Studies from Georgetown University and is the author of The History and Politics of the Bedouin: Reimagining Nomadism in Modern Palestine (Routledge, 2018)

Videos by and about Zionist organizations:

Israeli American Council – One of the many additional Zionist organizations: