You Are Here: Home → How Palestinians in Jerusalem are being targeted in a campaign of ethnic cleansing 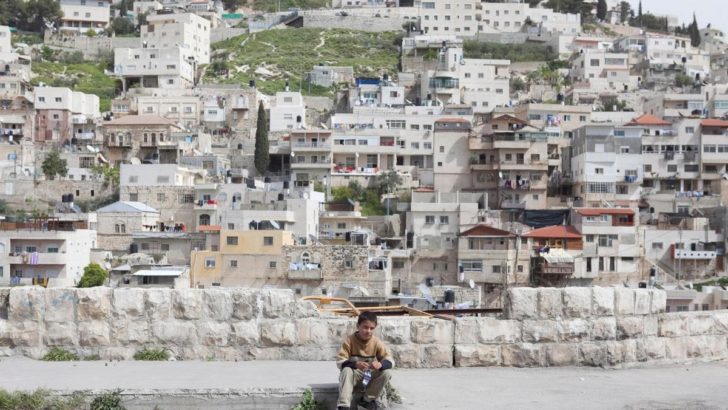 The Israeli Supreme Court has ordered the eviction of 700 Palestinians from Silwan near Al Aqsa mosque. Philip Cheung / The National

Israel’s takeover of Arab East Jerusalem has continued unabated since the 1967 war, but has grown more brazen since US President Trump’s decision to move the embassy. Evictions of Palestinians and appropriation of their homes by Israeli settlers is more frequent; Israeli police presence has grown more pervasive; Israel’s parliament is devising more new policies – and its supreme court is upholding them – to dispossess Palestinians. Meanwhile the PA is powerless to respond. It all adds up to ethnic cleansing.

by Jonathan Cook, The National

At the opening, he expressed hope it would serve as a precursor to his country relocating its embassy from Tel Aviv to Jerusalem. If so, the Czech Republic would become the first European state to follow US President Donald Trump’s lead in moving the US embassy in May.

It is this kind of endorsement that, of late, has emboldened Mr Netanyahu’s government, the Israeli courts, Jerusalem officials and settler organisations to step up their combined assault on Palestinians in the Old City and its surrounding neighbourhoods.

Israel has never hidden its ambition to seize control of East Jerusalem, Palestinian territory it occupied in 1967 and then annexed, as a way of preventing a viable Palestinian state from emerging.

Israel immediately began building an arc of Jewish settlements on Jerusalem’s eastern flank to seal off its Palestinian residents from their political hinterland, the West Bank.

More than a decade ago, it consolidated its domination with a mammoth concrete wall that cut through East Jerusalem. The aim was to seal off densely populated Palestinian neighbourhoods on the far side, ensuring the most prized and vulnerable areas – the Old City and its environs – could be more easily colonised, or “Judaised”, as Israel terms it.

This area, the heart of Jerusalem, is where magnificent holy places such as the Al Aqsa mosque and the Church of the Holy Sepulchre are to be found.

Under cover of the 1967 war, Israel ethnically cleansed many hundreds of Palestinians living near the Western Wall, a retaining wall of the elevated Al Aqsa compound that is venerated in Judaism. Since then, Israeli leaders have grown ever hungrier for control of the compound itself, which they believe is built over two long-lost Jewish temples.

Israel has forced the compound’s Muslim authorities to allow Jews to visit in record numbers, even though most wish to see the mosque replaced with a third Jewish temple. Meanwhile, Israel has severely limited the numbers of Palestinians who can reach the holy site.

Until now, Israel had mostly moved with stealth, making changes gradually so they rarely risked inflaming the Arab world or provoking western reaction. But after Mr Trump’s embassy move, a new Israeli confidence is tangible.

On four fronts, Israel has demonstrated its assertive new mood. First, with the help of ever-more compliant Israeli courts, it has intensified efforts to evict Palestinians from their homes in the Old City and just outside its historic walls.

Last month, the supreme court handed down a ruling that sanctions the eviction of 700 Palestinians from Silwan, a dense neighbourhood on a hillside below Al Aqsa. Ateret Cohanim, a settler organisation backed by government-subsidised armed guards, is now poised to take over the centre of Silwan.

It will mean more Israeli security and police protecting the settler population and more city officials enforcing prejudicial planning rules against Palestinians. The inevitable protests will justify more arrests of Palestinians, including children. This is how bureacratic ethnic cleansing works.

The supreme court also rejected an appeal against a Palestinian family’s eviction from Sheikh Jarrah, another key neighbourhood near the Old City. The decision opens the way to expelling dozens more families.

B’Tselem, an Israeli rights group, characterised these rulings as “sanctioning the broadest move to dispossess Palestinians since 1967”.

At the same time, Israel’s parliament approved a law to accelerate the settler takeover.

Over many years, Israel created a series of national parks around the Old City on the pretext of preserving “green areas”. Some hem in Palestinian neighbourhoods to stop their expansion while others were declared on the land of existing Palestinian homes to justify expelling the occupants.

Now the parliament has reversed course. The new law, drafted by another settler group, Elad, will allow house-building in national parks, but only for Jews.

Elad’s immediate aim is to bolster the settler presence in Silwan, where it has overseen a national park next to Al Aqsa. Archaeology has been co-opted to supposedly prove the area was once ruled by King David while thousands of years of subsequent history, most especially the current Palestinian presence, are erased.

Elad’s activities include excavating under Palestinian homes, weakening their foundations.

A massive new Jewish history-themed visitor centre will dominate Silwan’s entrance. Completing the project is a $55 million cable car, designed to carry thousands of tourists an hour over Silwan and other neighbourhoods, rendering the Palestinian inhabitants invisible as visitors are delivered effortlessly to the Western Wall without ever having to encounter them.

The settlers have their own underhand methods. With the authorities’ connivance, they have forged documents to seize Palestinian homes closest to Al Aqsa. In other cases, the settlers have recruited Arab collaborators to dupe other Palestinians into selling their homes.

Once they gain a foothold, the settlers typically turn the appropriated home into an armed compound. Noise blares out into the early hours, Palestinian neighbours are subjected to regular police raids and excrement is left in their doorways.

After the recent sale to settlers of a home strategically located in the Old City’s Muslim quarter, the Palestinian Authority set up a commission of inquiry to investigate. But the PA is near-powerless to stop this looting after Israel passed a law in 1995 denying it any role in Jerusalem.

The same measure is now being vigorously enforced against the few residents trying to stop the settler banditry.

Adnan Ghaith, Jerusalem’s governor and a Silwan resident, was arrested last week for a second time and banned from entering the West Bank and meeting PA officials. Adnan Husseini, the Palestinian minister for Jerusalem, is under a six-month travel ban by Israel.

Last week dozens of Palestinians were arrested in Jerusalem, accused of working for the PA to stop house sales to the settlers.

It is a quiet campaign of attrition, designed to wear down Jerusalem’s Palestinian residents. The hope is that they will eventually despair and relocate to the city’s distant suburbs outside the wall or into the West Bank.

What Palestinians in Jerusalem urgently need is a reason for hope – and a clear signal that other countries will not join the US in abandoning them.

Jonathan Cook is a freelance journalist based in Nazareth