You Are Here: Home → BDS victory: 2 U.S. Police Departments Drop Out of Training Program With Israel 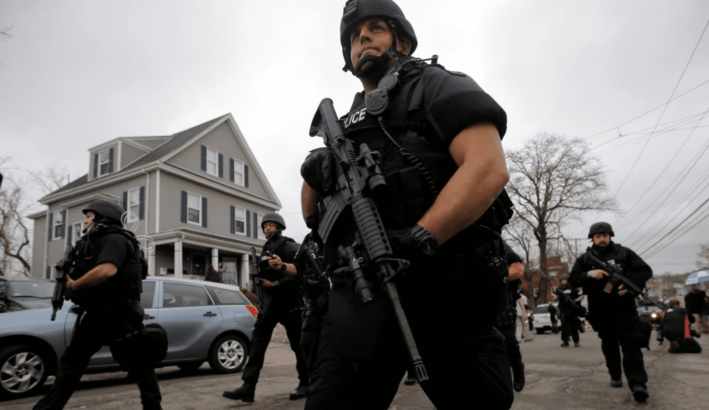 As a result of public pressure, the Vermont State Police and the police department for Northampton Massachusetts have decided to pull out of the ADL-sponsored, all-expenses-paid “Resiliency and Counterterrorism” program in Israel. The seminar highlights methods Israel uses to “thwart terrorism within its framework of a democratic and multicultural nation.”

Two police departments in the northeastern United States decided over the past week to cancel their participation in a program that involves visiting Israel and meeting Israeli police officers, due to public pressure by a coalition of progressive organisations, including a number of groups affiliated with the Boycott, Sanctions and Divestment movement (BDS).

This is the first time in the program’s two decades that political pressure has led to police departments cancelling their participation.

The program these police departments were planning to join is managed by the Anti-Defamation League. It is titled “Resiliency and Counterterrorism” and includes a week-long seminar in Israel, during which participating police officers from across the U.S. learn how Israeli law enforcement deals with the threat of terrorism. The American officers meet with Israeli and Palestinian police officers during the visit and learn from their experience.

The opponents of this program, including a number of groups affiliated with the BDS movement and others focused on domestic law enforcement issues in the U.S., claim that the program inspires police departments and other law enforcement agencies in the U.S., including the Immigration and Customs Enforcement agency, to adopt harsher policies commonly used in Israel. This claim is denied by the ADL, which says the program focuses on dealing with terrorism threats and the importance of community-police ties to successfully dealing with such threats.

The program has existed for more than a decade and has attracted hundreds of participants from across the United States thus far. This week, however, The Vermont State Police, which is responsible for law enforcement in approximately half of the northeastern state, and the police department in the town of Northampton, Massachusetts, both informed the ADL office in Boston that they will not take part in the program, which is scheduled to begin in Israel within days.

These two departments’ decisions were hailed as a victory by groups that have been active against the ADL program. Jewish Voice for Peace put out a press release stating: “For the first time in 20 years, the all expense-paid trips to Israel where American law enforcement are trained by the Israeli military and police have run into a snag.” JVP was part of a coalition of local organizations in both Vermont and Massachusetts that pushed these police departments to cancel their participation in the seminar.

ADL, it should be noted, denied that the trips include any sort of tactical training by the IDF.

Stefanie fox, JVP’s deputy director, wrote in response to the cancellations that “the coalitions that quickly mobilized to demand cancelation – and the principled response to do so from local decision-makers – demonstrates the growing consensus that the Israeli military does not offer a good model, not for for the people of Israel/Palestine and not for our communities here at home.”

ADL told Haaretz in a statement on Friday that the purpose of the program is “to provide senior American law enforcement leaders with education to enhance their effectiveness in preventing and responding to extremist and terrorist threats and violence. The weeklong seminar enables participants to study how Israel works to thwart terrorism within its framework of a democratic and multicultural nation.”

The organization also noted that “participants meet with senior officials from both Israeli and Palestinian law enforcement to learn about the challenges that they face and how they overcome them, and learn as well about community resiliency in the aftermath of terror and tragedy.”

ADL also said that “the characterization that the seminar consists of tactical military-style training with the Israeli military is simply wrong. The assertion that American Jewish institutions are responsible for rising levels of police brutality and racism against people of color in the U.S. because of this program is patently false, and neither helpful in dealing with the racial challenges facing this country nor in solving the complex Israeli-Palestinian conflict”.

The coalition that led to the cancellations in Vermont and Massachusetts is currently working to convince other police departments to back out of the program. On Friday, a letter addressing this issue was sent to the mayor of Boston, Marty Walsh, by a group of local activists from JVP and other organizations.

“Given that the Boston Police Department is under your jurisdiction as Mayor of Boston, we ask that you too choose to cancel Boston’s participation in the seminar,” the activists wrote. “We’ve seen your office take firm positions, time after time, against the racist and bigoted policies of the Trump administration. The people you have pledged to protect are asking today that you continue to do so by saying no to police training with a military force that currently maintains a brutal military occupation.”

The Vermont State Police said in a statement released on Friday that the ADL program “offered an opportunity to interact with Israeli and Palestinian law-enforcement agencies, observe the security strategies and systems Israel uses to prevent terror attacks, and discuss the challenges the parties face in the region,” but that following the criticism raised over the issue by local activists, the chief of the state police decided to “withdraw his participation.”

ADL’s letter to Airbnb fails to make a compelling argument