You Are Here: Home → The Forced Displacement of Palestinians Never Truly Ended: A Revealing Family Story 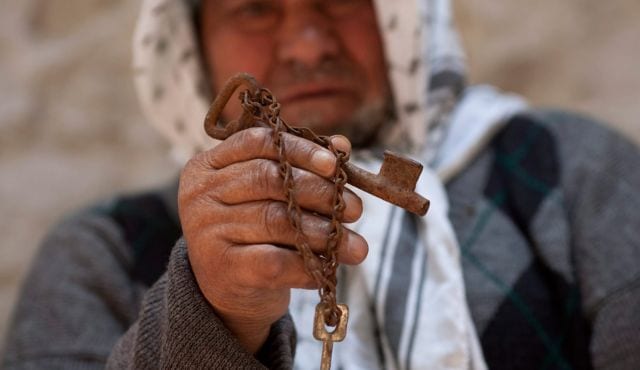 To Palestinians, the key is a symbol of loss – the Nakba – as well as an emblem of hope – the right of return.

As Israel celebrates its 70th anniversary, a child and grandchild of exiled Palestinian refugees describes his remarkable family history: family members harbored Jewish neighbors in 1929 and worked with UN Mediator Count Folke Bernadotte in 1948 till his assassination. The family was financially ruined in the Nakba; Israel confiscated the family home and Golda Meir lived in it for a time. Today he is informed that his family “never lived there” – just one example of the continuing injustices endured as Palestinians resist Israel’s violent colonization.

By George Bisharat, The Nation

Approaching the 70th anniversary of Israel’s founding/Palestine’s destruction—for they are two sides of the same coin—I have been reviewing letters from that fateful era by my Palestinian grandfather, Hanna Ibrahim Bisharat, or “Papa” to us. It is poignant reading.

The Nakba (“Catastrophe”) impacted virtually all Palestinians. Roughly 750,000 were driven from their homes or fled in terror following massacres of Palestinian civilians by Jewish militias. By their numbers and overwhelming ownership of land, Palestinian Muslims and Christians impeded the foundation of a Jewish state. Israel expelled them, seized or destroyed their homes and villages, and has violently barred their return to this day—most recently from the Gaza gulag.

The forced displacement of Palestinians never truly ended. It continues inside Israel in Umm al-Hiran, a Palestinian Bedouin village soon to be razed and replaced by a new, exclusively Jewish community. The pace of settlement in Jerusalem and across the West Bank has hastened under the Netanyahu government, emboldened further by Donald Trump’s recognition of Jerusalem as Israel’s capital.

Because the colonized always resist, the injustices of this continuing Nakba compounded: torture, assassination, imprisonment without trial, banishment, home demolitions, jailing of Palestinian children, and more. In the laboratory of military occupation, Israel has perfected technologies of surveillance and repression that it now exports globally.

Back in 1948, my family never fled at gunpoint into the night, nor trudged along traffic-choked roads in sweltering heat without adequate shelter, food, or water, as did many Palestinian refugees. My father, after graduating from the American University of Beirut and practicing eye surgery in Gaza, had come to the United States seeking advanced ophthalmic training, soon meeting and marrying my American mother. My aunt was in boarding school in Cairo. My Uncle George, following my father’s footsteps, was studying medicine in Beirut. Papa was conducting business in Amman.

But the Nakba ruined my grandfather financially. The Haganah (a Jewish militia that became the Israeli army) seized Villa Harun ar-Rashid, the stately family home Papa built in 1926 in the Talbiyeh quarter of Jerusalem, then later rented out. Eventually Villa Harun ar-Rashid was expropriated under Israel’s Absentee Property Law. Golda Meir and a Supreme Court justice who authorized further seizures of Palestinian lands later lived there.

Papa was a serial entrepreneur. Trained in Switzerland in agricultural engineering and fluent in five languages, he pioneered mechanized farming in the region. With his brothers, he helped the British government build the Haifa-Baghdad Road. Following World War II, at huge expense, he had purchased an entire decommissioned US Army base, and had shipped its contents from Libya to Palestine.

These valuable goods rested in the port of Jaffa in 1948. Papa never saw them again. His letters betray frantic efforts to generate income to support his family. He traveled incessantly in the Arab world, and to the United States, struggling vainly to drum up business.

Our family ethic has always demanded: never leave the unfortunate behind. The first duty of the strong is to help the weak. That is why my family rescued four Australian and New Zealander soldiers caught behind Turkish lines during World War I, leading to the imprisonment and near execution of my entire extended family. That is why, during the Jerusalem riots in 1929, my grandparents harbored Jewish neighbors in Villa Harun ar-Rashid. That is why, as Papa fought to recover from the Nakba, he was haunted by the greater suffering of his fellow Palestinians, the true refugees. 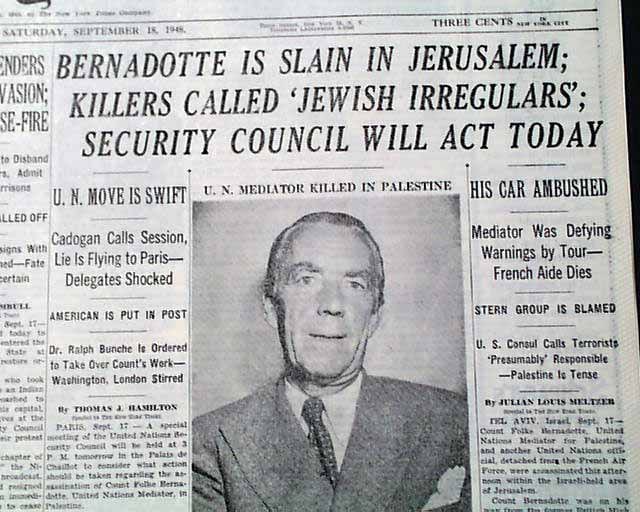 Papa worked tirelessly to raise money for refugee relief. He cooperated with Swedish diplomat Count Folke Bernadotte until the latter’s assassination by Jewish terrorists in 1948, then, by letter, consoled his widow. As the first United Nations Mediator to Palestine, Bernadotte had firmly supported return for Palestinian refugees.

Papa died suddenly in 1956 of a heart attack or stroke, we were never sure. He was robbed of his worldly possessions; I was robbed of my chance to know him.

In its genius, Israel has now vanquished the Palestinian quest for a state. But to the yin of Israel’s strategic victory is a yang of equal or greater strategic failure: its failure to reduce by greater numbers the Palestinians under its rule. Palestinians (6.5 million) again outnumber the Jewish population (6.44 million) within historic Palestine. Barring genocide or renewed mass expulsions, then, Palestinians and Jews will continue to live together under one effective sovereignty.

The only question is: How soon will the current apartheid regime yield to equal rights? A visionary leader, an Israeli de Klerk, will one day recognize that the long-term security of Israeli Jews is better served by respecting the rights of Palestinians to life and dignity than by seizing their lands, discriminating against them based on their ethnicity, and violently repressing their resistance.

I am strong living here in the United States. Yes, it is my duty not to leave behind my fellow Palestinians, whether enduring the travails of exile, the daily brutalities of military occupation, or mounting racism and discrimination in Israel. I am with them until justice and return.

George Bisharat is a professor at UC Hastings College of the Law and writes frequently about law and politics in the Middle East.