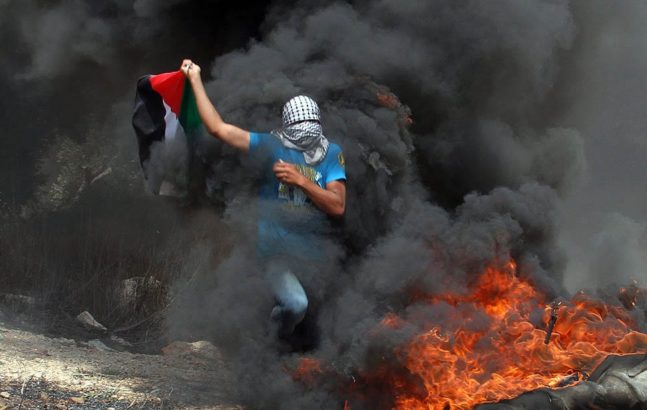 Palestinian journalist Yousef Alhelou’s vivid description of the situation at the Gaza-Israel border brings us up close, where we can see the images and understand the motivations on both sides.

When the thousands of mainly young Palestinian protesters decided to flock to the Gaza border areas as part of the Great March of Return, it was supposed to be peaceful.

Those who believe in non-violent struggle hailed the absence of armed Palestinian men at the protests. Scores of Palestinian women were seen in the frontline. Giant poster placards of peace legends like Gandhi, King and Mandela were erected near the border area to assert the peacefulness of the protest.

Heavily armed Israeli occupation forces versus Palestinian civilian protestors. Stone throwers were met with live ammunition and sniper shots. A brutal crushing force was used to scare everyone present during the protests, be they civilians or journalists or paramedics.

With the killing of about 39 unarmed protestors, including at least 4 children and a journalist during 4 weeks of protests, Israeli forces have turned the protests bloody.

Over 4,900 injuries were reported during the same period, including at least 134 in critical condition; some have lost limbs due to the severity of their wounds.  Some cases were denied Israeli permission to leave Gaza and be transferred to hospitals in Israel or the West Bank. Such measures are aimed at punishing those injured for taking part in the protests and weakening the morale of others as Palestinians are gearing up for the commemoration of Nakba Day on May 15th. [This day commemorates the Israeli expulsion of hundreds of thousands of Palestinians.]

Reports of Palestinian casualties have become the norm, with zero injuries on the Israeli side. Logically it was suicidal for unarmed Palestinian protestors to approach the fence knowing in advance that being killed could be their fate, as hundreds of heavily Israeli soldiers and snipers  were deployed all along the border fence.  Sounds crazy! The images of protestors maimed or injured by gunshots were shocking; the resulting shattered bodies are just beyond belief. The protestors were unarmed, the parties asymmetrical.

Scenes of destruction, killings, attacking fishermen and farmers, as well as arrest campaigns during previous Israeli invasions are engraved in their minds.

As the crowds started to arrive amid the presence of ambulances and journalists, adrenaline started rushing. Some boys attempted to reach the fence, keeping eye contact with the Israeli soldiers in a state of defiance, heroism emanating from patriotism.

Palestinians remain undeterred. “Duty is calling” is what they would tell you. Peaceful protesters share their photos on social media and, in some cases, bid their loved ones goodbye, knowing they might not come back alive.

No one is immune. In some cases wounded paramedics were carried by their colleagues. Journalists are taking extra precautions as they know that they might not be spared by Israeli fire during the course of their work.

The Israeli army invited foreign journalists to report on the protests from behind the Israeli fence, taking cover from a distance behind piles of sand. I wonder if they were able to see their injured Palestinian colleagues across the border.

The intensity of the deadly force was less on the third week compared to previous bloody weeks. It’s obvious that Israel wanted to avoid more international outcry. No doubt Tel Aviv suffered PR disaster after a number of videos of Palestinian civilian protestors shot dead went viral and shared on Social Media platforms.

Scores of Palestinian women were seen in the frontline side by side with the men, sharing the struggle. I guess that was their response to Israeli officials who criticized the participation of Palestinian females in the protests. Since the snipers knew where every bullet went according to an army official, they possibly have avoided shooting those ladies to avert another international condemnation, as attacking women would fuel the situation.

No one is safe or immune in the besieged Gaza strip, this was made clear recently by Israeli defense minister Avigdor Lieberman saying that “no one is innocent in Gaza” associating Gaza’s population to be Hamas supporters! 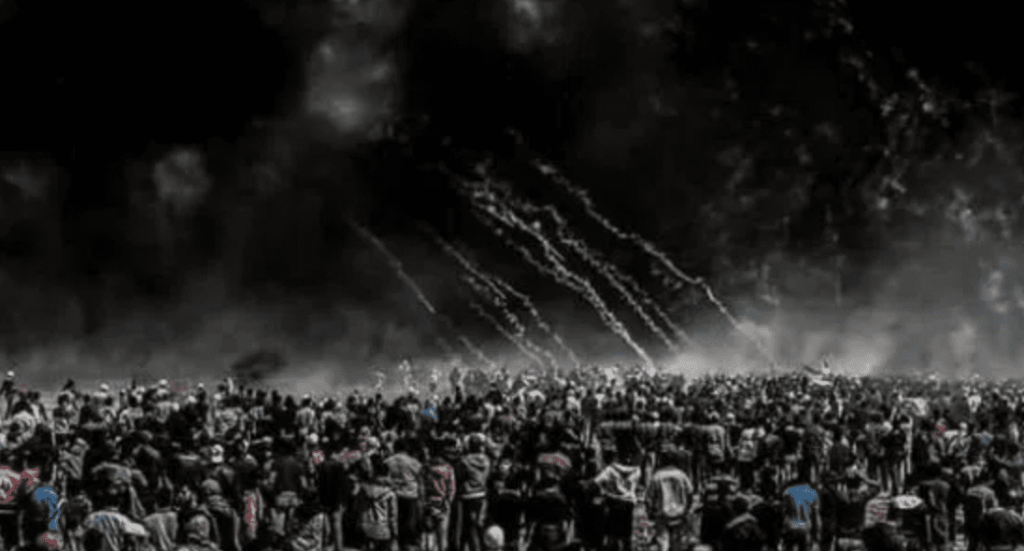 Preparing for the next round

As night fell during the past three Fridays in a row, protestors left the border areas, and retreated to the encampment sites about 700 meters from the fence, considered safe by the organizers of the “Great Return March”. The Ministry of Health released the latest figures of causalities; families of the dead prepare the funeral processions for their loved ones.

While tension occurs on the ground, another battle takes place online. Israeli army officials are posting messages on Facebook pages in Arabic to communicate their propaganda directly with the Palestinians.  Army officials such as the Arabic speaker of the Israeli army Avchay Adraee and Yoav Mordechai known as the “coordinator”, who serves the role of the coordinator of the Israeli Government Activities in the Palestinian Territories (COGAT) post messages on their pages to communicate directly with the Palestinians, in an attempt to divert the attention of the protestors against Hamas, accusing it of being responsible for the miseries in the besieged territory and for using Gazans are hostages under its control.

Stubbornness of the youths cannot be won by intimidation or propaganda, however, especially if your life has no value anymore in light of the harsh living conditions.

The border fence constitutes the curse that haunts those living in Gaza. As someone who was born in Gaza — a tiny piece of land; 40 minutes drive from the north to the south — I can tell you that it is no joke when a Gazan wishes if he or she were a bird in order to fly across the border. The width of the overcrowded enclave does not exceed 7 miles, while the allowed fishing zone for Gaza fishermen does not exceed 6 nautical miles. Palestinian West Bankers have a 440 miles concrete wall to contend with, which runs four times as long as its infamous Berlin Wall.

Gaza is often described as a “pressure cooker” and was subjected to three devastating wars with Israel in late 2008, late 2012 and mid-2014.

Israel has dismissed the protest as a Hamas ploy, adding insult to injury. Of course the local authorities in Gaza under Hamas’ rule facilitated the arrangements of setting up the encampments and makeshift tents for people to rest, as well as transporting people towards the border areas. But no one is forcing anyone to march to the border area. The medical sector has been on high alert and standby for any emergencies.

It is time for a solution

A grim reality prevails amongst the tiny enclave’s inhabitants of nearly 2 million, half of whom are young people under the age of 18.  Life is unbearable and it is amazing how people are surviving on a day-to-day basis. Many families now cannot put bread on the table, and a large percentage of the population relies on aid assistance from international agencies such as UNRWA. Many cases of suicide were reported in Gaza in recent years.

Those who can afford to leave Gaza are migrating to European countries, looking for a better future. Two thirds of the population are descendants of refugees. Many of those who took part in the protest stated to local media, “there is no life in Gaza”.

Now that Gaza (known as the world’s largest open air prison) has got the world’s attention and is making headlines worldwide, it waits for any intervention to help create hope and find a political solution.  But unless Israel is willing to work toward peace, or unless the international community intervenes, the people of Gaza will continue to suffer.

What is happening in Gaza is a man-made disaster, and protests along the border by angry, hopeless young protesters are a means to express the despair against all those responsible. 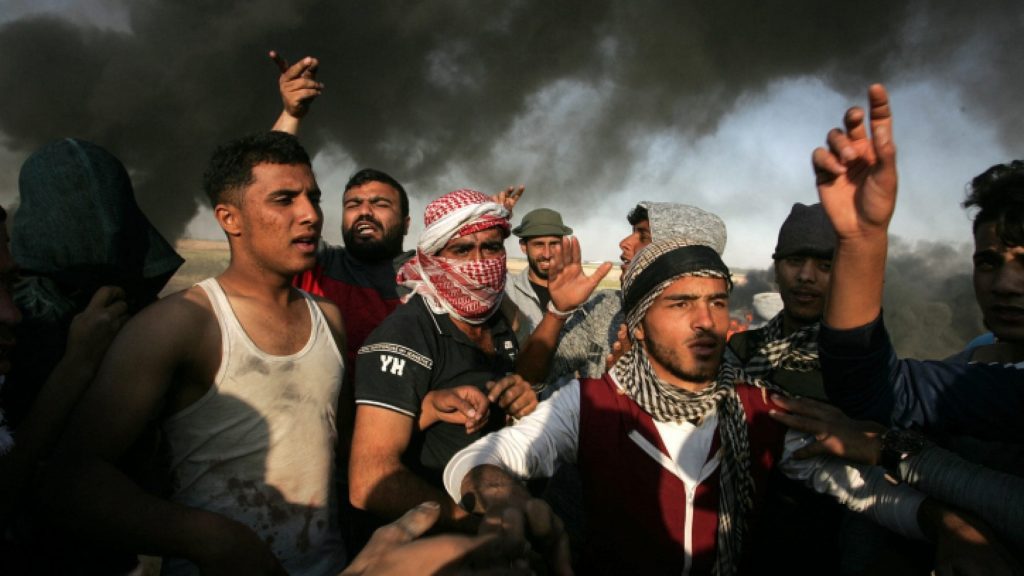 Yousef Alhelou is a Palestinian journalist based in London, who has been reporting on Gaza since 2007 for diverse media outlets.