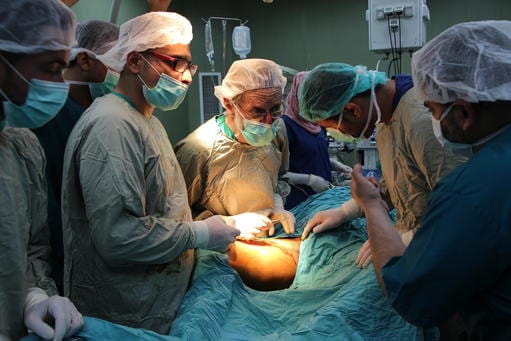 Orthopaedic surgeon Dr Thierry Saucier operates on the leg of an injured patient in Alqsa Hospital in Gaza.

Doctors Without Borders teams in Gaza report high casualties, many patients with “devastating injuries of an unusual severity” and “an extreme level of destruction to bones and soft tissue.” They also predict that, unless they receive proper care – most likely outside Gaza – some will need amputation, most will have “serious, long-term physical disabilities.”

Andalou Agency reports that, according to a Gaza Health Ministry spokesman, “the bullet penetrates the body and explodes inside, damaging multiple organs,” and “the bullets we’re seeing now are the deadliest the Israeli army has ever used.”

Since 1 April, MSF teams in Gaza, Palestine, have provided post-operative care to more than 500 people injured by gunshots during the March of Return demonstrations. The number of patients treated in our clinics over the last three weeks is more than the number we treated throughout all of 2014, when Israel’s military Operation Protective Edge was launched over the Gaza strip. MSF medical staff report receiving patients with devastating injuries of an unusual severity, which are extremely complex to treat. The injuries sustained by patients will leave most with serious, long-term physical disabilities.

Medical teams in Gaza’s hospitals prepare to face a possible new influx of wounded this Friday in the latest of the March of Return demonstrations. MSF surgeons in Gaza report devastating gunshot wounds among hundreds of people injured during the protests over recent weeks. The huge majority of patients – mainly young men, but also some women and children – have unusually severe wounds to the lower extremities. MSF medical teams note the injuries include an extreme level of destruction to bones and soft tissue, and large exit wounds that can be the size of a fist.

“Half of the more than 500 patients we have admitted in our clinics have injuries where the bullet has literally destroyed tissue after having pulverized the bone”, said Marie-Elisabeth Ingres, Head of Mission of MSF in Palestine. “These patients will need to have very complex surgical operations and most of them will have disabilities for life.”

Managing these injuries is very difficult. Apart from regular nursing care, patients will often need additional surgery, and undergo a very long process of physiotherapy and rehabilitation. A lot of patients will keep functional deficiencies for the rest of their life. Some patients may yet need amputation if not provided with sufficient care in Gaza and if they don’t manage to get the necessary authorisation to be treated outside of the strip.

To face this massive influx of patients, MSF has reinforced its capacities, increased the number of beds in its post-operative clinics, and recruited and trained additional medical staff. A fourth clinic will open soon in the Middle-Area region of Gaza to provide patients with the necessary specialised care.

In response to the crisis, MSF has also deployed a team of surgeons (including vascular, orthopaedic and reconstructive surgeons) and anaesthetists to operate – or re-operate – on the more severe cases. This team currently works side-by-side with Palestinian medical staff in Al-Shifa and Al-Aqsa public hospitals.

The Israeli army appears to be using new weapons — including exploding bullets — against Palestinian protesters on the Gaza Strip’s eastern border.

With a view to determining the exact nature of these weapons, Anadolu Agency spoke to local medical sources and injured Palestinian protesters.

“The bullets we’re seeing now are the deadliest the Israeli army has ever used,” al-Qidra told Anadolu Agency. “This ammunition can cause massive damage to the bodies of victims, frequently resulting in death.”

“These bullets, which our medics have yet to identify, can affect bone, muscle, arteries and other organs,” al-Qidra said.

Victims of these bullets, he explained, are completely incapacitated — if they survive at all — and usually require extensive surgery.
“The bullet penetrates the body and explodes inside, damaging multiple organs — not just the targeted area,” al-Qidra said.

“Such ammunition is banned internationally, but Israel continues to use it against peaceful demonstrators,” he added.

Fahad Zuhd, 28, has been in hospital for the last two weeks after having been shot in the leg while taking part in Gaza’s ongoing border protests.

When he was shot, Zuhd told Anadolu Agency: “I saw my knee explode; I lost 8.5 centimeters of bone while the blood vessels and arteries in my leg were ruptured.”

“When I arrived at the hospital, I had only three and a half units of blood due to severe hemorrhaging,” the young man recalled.

Zuhd has since undergone several surgical operations aimed at replacing the bone destroyed by the bullet.

Another victim of this deadly new bullet was Palestinian journalist Yasser Murtaja, who had been covering the rallies on April 6 when he was shot in the abdomen by an Israeli sniper.

Murtaja died shortly afterward when the bullet exploded in his abdomen, destroying his spleen, colon and liver.

Since the border rallies began almost three weeks ago, at least 35 Palestinians have been killed — while hundreds more have been injured — by cross-border Israeli gunfire.

According to al-Qidra, most of these deaths were caused by exploding bullets.

The rallies are part of a six-week demonstration that will culminate on May 15. That day will mark the 70th anniversary of Israel’s establishment — an event Palestinians refer to as the “Nakba” or “Catastrophe”.

Demonstrators demand that Palestinian refugees be granted the “right of return” to their homes in historical Palestine from which they were driven in 1948 to make way for the new state of Israel.