You Are Here: Home → Israeli Settlers and Soldiers Wound 105 Palestinian Civilians in Jerusalem 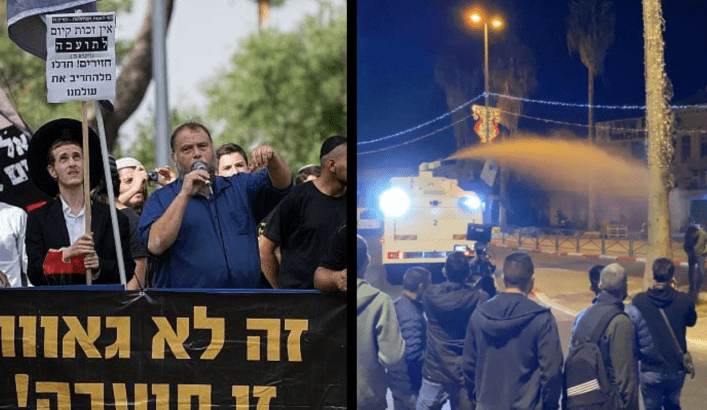 Left: Benzi Gopstein (with microphone), head of the anti-miscegenation (intermarriage) group Lehava, leads a demonstration against the Jerusalem Gay Pride parade on June 6, 2019. Gopstein vowed that Lehava members would show up with “Israeli flags and lots of Jewish pride, without fear.” Right: Israeli soldiers spray Palestinians and counter-protesters with ‘skunk water,’ Thursday night.

Israeli settlers chanting “Death to Arabs” marched through the streets of Jerusalem Thursday night, attacking Palestinians, including Palestinian worshipers who were on their way to pray at the al-Aqsa Mosque for Ramadan prayers.

The settlers were part of a right-wing Israeli group called Lehava, which organized the attack march with the stated aim of “restoring Jewish dignity” by “breaking the faces of Arabs”. [NOTE: read more about Lehava and other extremist groups here.]

Counter-protesters, including left-wing Jewish Israelis and Palestinians, gathered at Zion Square to try to block the attack march from entering the Palestinian neighborhoods in East Jerusalem. Another group tried to stand up to the right-wing attackers at Nablus Gate, one of the entrances to the Old City of Jerusalem. [NOTE: for background on the situation in East Jerusalem, go here.]

But the right-wing attackers plowed through the counter-protesters, and headed toward the Palestinian neighborhood of Sheikh Jarrah, where they slashed car tires of dozens of Palestinian vehicles on Al-Mutran Street.

The majority were treated for their injuries and then released, but 22 remain in the hospital in moderate to severe condition. At least one Palestinian was shot with live ammunition fired by Israeli border police. He was shot in the head and remains in critical condition.

According to the Israeli daily Ha’aretz, right-wing groups that organized the march called for violence in social media groups – some of which were moderated by right-wing Israeli lawmaker Itamar Ben-Gvir. In the message groups, march participants posted that Arabs (meaning Palestinians in Jerusalem) should be hanged, and one member wrote, “We’re burning Arabs today, the Molotov cocktails are already in the trunk.”

The area where the attacks took place drew near to the location where, in 2014, 16-year old Mohammad Abu Khdeir was kidnapped by a gang of right-wing fanatic Israelis, tortured, covered in gasoline and burned to death in a brutal murder motivated by the attackers’ anti-Arab racism. [NOTE: read about Mohammad Abu Khdeir here.]

Following the night of anti-Palestinian violence on Thursday night, Friday morning saw Palestinian youth taking to the streets in Wadi al-Joz and al-Tur neighborhoods in East Jerusalem, where an Israeli settler who was driving through the neighborhood had his car seized and torched by Palestinian youth. No one was injured in that incident.

In a statement, the Prime Minister called on the international community and international human rights committees to condemn these attacks and work to provide international protection for the citizens of Jerusalem.