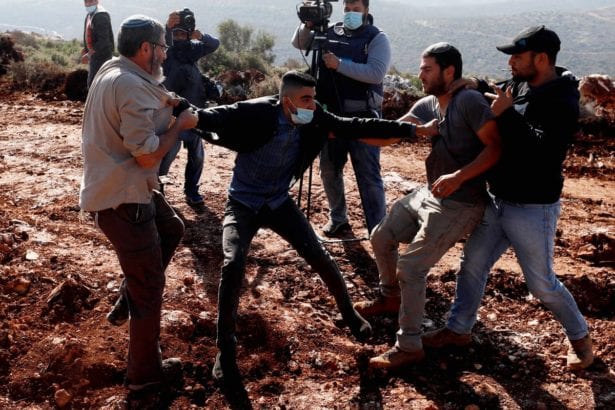 No protected status for Palestine TV journalists under occupation (Pictured: Jewish settlers brawl with Palestinians in the West Bank on November 30, 2020)

In a moment of supreme irony, a Palestinian film crew, documenting illegal settlement activity and settler violence, were attacked by Israeli settlers. Several Israeli soldiers joined in on the assault.

Reposted from Middle East Monitor, February 8, 2021
Israeli settlers attacked the Palestine TV crew this morning while they were filming near the illegal settlement of Ariel, built on land seized from Salfit in the north of the West Bank.

According to Wafa news agency, Israel security forces from the settlement also attacked the crew as they were filming a documentary outside the illegal structure, about the escalating illegal settlement activity and the dangerously increasing assaults by settlers against Palestinians and their properties.

It added that a few soldiers also tried to disrupt the filming of the report by using loudspeakers and intercepting the journalists.

In a report published last June, the Journalists’ Support Committee, a non-profit organisation representing journalists, said Israeli occupation forces have committed more than 56 violations against Palestinian journalists in occupied Jerusalem during the first half of 2020.

The report also revealed that the Israeli occupation renewed the ban on Palestine TV‘s activities in Jerusalem, fined six journalists, confiscated four items of media equipment, raided homes of six journalists, threatened and beat six others, and sentenced one.

In 2019, Israeli police and intelligence personnel stormed Palestine TV‘s office in East Jerusalem and handed the closure order to its administration.

Palestine TV says that the Israeli authorities often harass its staff, arresting and questioning them.