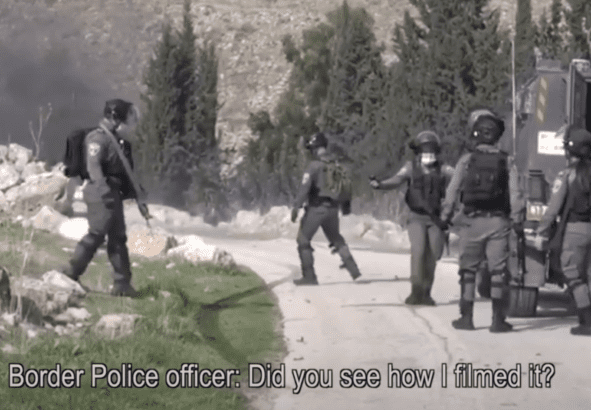 Israeli soldiers shoot Palestinians on a daily basis. On this day at least, it was a sport.

This is just the latest incident caught on film in which Israeli soldiers cheered and congratulated each other after shooting a Palestinian protester. The teen may face a lengthy recovery. Such violence against the occupied Palestinian population is daily and deliberate.

This video shows Israeli occupation forces celebrating after a sniper shoots and injures a Palestinian protesting the theft of land by settlers in the central occupied West Bank on 27 November.

The video, published this month by the human rights group B’Tselem, was filmed by press photographer Hisham Abu Shaqrah as he stood behind an Israeli Border Police jeep near the community of Ein Samia.

It shows the sniper lying on the ground and then firing a 22-caliber bullet at the leg of a protester identified by B’Tselem as Y.B.

“I heard the officers cheering the sniper and congratulating him as if he’d done something great,” Abu Shaqrah told B’Tselem. “They looked happy and were laughing and patting him on the back.”

But Israeli soldiers have been caught previously cheering and celebrating as they shoot and bomb Palestinians.

“I felt like an electric current hit me hard in the left leg.” Y.B. told B’Tselem. “I couldn’t stand on it and started limping on my right leg.”

Y.B. was evacuated by paramedics and treated in hospital. He faces possible surgery and the prospect of a long-term injury.

According to B’Tselem, incidents like the shooting of Y.B. demonstrate “Israel’s long standing open-fire policy in the West Bank, which conveys blatant disregard for the lives and well-being of Palestinians.”

Israel claims that 22-caliber rounds, fired from US-made Ruger rifles, are less lethal than other kinds of live ammunition.

But on 4 December, in the same area, occupation forces fatally shot 15-year-old Ali Ayman Saleh Nasser with the same kind of bullet while he observed a protest.

The context for both shootings was the weekly protests by residents against the seizure of land by Israeli settlers.

Last November, the settler outpost was relocated to an area where residents of the Ras al-Tin Bedouin community graze their animals.

The settlers “have been attacking and harassing farmers and shepherds in the area and scaring them off the land,” B’Tselem has reported.

For their part, local residents have regularly demonstrated against the settler outpost.

On the day Y.B. was shot, about 100 Palestinians headed towards Ein Samia to protest. As they walked towards a road where Israeli forces were stationed, the occupation forces “hurled stun grenades at them,” according to B’Tselem.

More soldiers arrived, spread out along the hills, then began “hurling stun grenades and firing rubber-coated metal bullets at the protesters,” some of whom responded with stones.

Some protesters then “blocked the road with burning tires, stopping the police from advancing.” Y.B was among a group of protesters hurling stones at the Israeli officers from more than 100 meters away.

The attacks against Palestinians defending their land against Israel’s violent colonization are systematic.

Another video filmed a week earlier shows soldiers in the area shooting Palestinian anti-settlement activist Abdallah Abu Rahma with a sponge-tipped round as he came to assist a paramedic who had just been handcuffed by Israeli occupation forces.

The Israeli forces had been assaulting and manhandling protesters against the settlement, including an elderly man.

While sponge-tipped rounds may sound benign, they cause extremely painful injuries and can kill.

And on 18 December, according to B’Tselem, one settler opened fire on the protesters near Ras al-Tin as others threatened them with dogs. Israeli occupation forces did nothing to stop them.

Instead, as the video below shows, soldiers joined the settlers in attacking Palestinians with tear gas and stun grenades.

But this violence is not incidental to Israel’s occupation and colonization policies. It is deliberate.

“All the parties responsible for determining, implementing and enforcing this policy are well aware of its outcomes,” B’Tselem notes.

“Senior military officials approve it, legal advisers sign off on it, soldiers on the ground carry it out, and the military law enforcement system rapidly whitewashes it by making a show of true concern and investigation while in fact condoning these acts.”

Another victim of this planned violence is Harun Abu Aram, a Palestinian shot in the neck by Israeli forces as he tried to prevent them from seizing a generator being used by a family living in a cave in the South Hebron Hills on New Year’s Day.

Israel briefly investigated the shooting and quickly exonerated itself.

This week, B’Tselem recounted that immediately after the shooting, Harun’s father Rasmi Abu Aram tried to take his son to the hospital in a private car driven by another man.

Yet as the car was reversing, a soldier shot at its tires. Harun had to be transferred to another car to be evacuated.

As of 14 February, Harun Abu Aram is still in hospital on a ventilator and may remain fully paralyzed.

Harun Abu 'Aram is currently in hospital and ventilated, and may remain fully paralyzed.https://t.co/0q7SF6Dasj pic.twitter.com/2ZrDjA65vZ

Israel’s harassment of residents of the South Hebron Hills, just like its attacks on Palestinians all across the West Bank, “creates an unbearable living environment,” according to B’Tselem.

All this is “aimed at driving the residents to leave their homes – as though of their own accord – in order to make it easier for Israel to take over their land.”

Israel’s settler-colonization of occupied Palestinian land and all its attendant violence are among the war crimes Palestinians are hoping the International Criminal Court will prosecute after judges this month cleared the way for a formal investigation.