You Are Here: Home → Israel committed 415 violations against Palestinian journalists in past year

Israel committed 415 violations against Palestinian journalists in past year 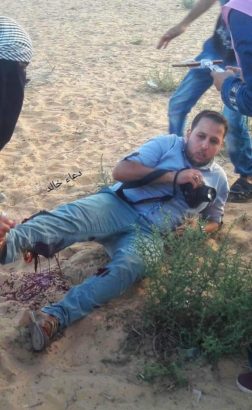 Palestinian journalist Zaki Awadallah after he was shot by Israeli forces in July 2018. (Photo from his Facebook page.)

The Israeli government is  deliberately targeting Palestinian journalists in both the Gaza Strip and the West Bank.

The Ministry of Information, on the International Day of Solidarity with Palestinian journalists, reported that the number of human rights violations, from the beginning of year 2019 to the end of August 2019, totaled 415; this included 82 journalists who were injured while covering the Great Return March, in Gaza.

The Ministry pointed out that Palestinian journalists became a central target of Israeli occupation forces during their coverage of the ongoing demonstration, which began on March 30, 2018, along the eastern border of the Gaza Strip.