You Are Here: Home → Settler violence: a rampage by Israel’s own homegrown supremacists

Settler violence: a rampage by Israel’s own homegrown supremacists 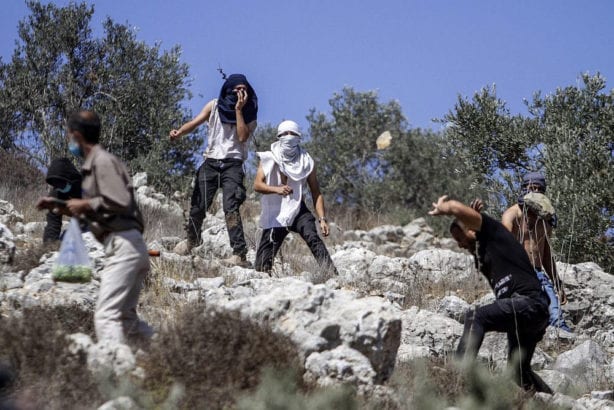 Settler violence is on the increase. Pictured: Israeli settlers hurl stones at Palestinians during the annual harvest season near the Israeli settlement of Yitzhar, West Bank on October 7, 2020.

Imagine white supremacists routinely invading suburbs and rural villages to terrorize Black people. Now imagine these attacks growing so extreme that white supremacists can even take over the homes and land of those Black people, simply because they can, knowing the authorities will turn a blind eye… That’s what Israel does year after year after year to Palestinians – while US politicians from both parties continue to send Israel over $10 million per day…

It shouldn’t take much to imagine this. The threat of vigilante terrorism was the reality for Black Americans in the postbellum South for decades. Armed white supremacists would raid Black neighborhoods to strike fear into the hearts of the population, often with brutal results.

Terror is the only way to describe what has been taking place in Palestinian towns and villages in the occupied West Bank over the past month. Ever since Ahuvia Sendak, a 16-year-old settler, was killed last month in a car crash with a police vehicle during a high-speed chase, Israeli settlers have been unleashing their rage on Palestinians.

As Orly Noy reported this week, settlers have committed at least 52 violent acts against Palestinians – including throwing stones at vehicles and homes, and attacking farmers – since Sandak’s death. Fourteen Palestinians, including two children, have been wounded by these attacks.

Just last week, Israeli settlers forcibly evicted a Palestinian family from their home in the South Hebron Hills. The settlers simply walked in, hung out, lit a bonfire outside, and claimed the home as their own for several hours. The next day, when one of the Palestinian family members asked the army to ensure the settlers don’t return, an IDF representative responded, “Donn’t bring journalists and a lot of people, and don’t make problems, or I’ll expel you and them, understood?”

For much of the Jewish public in Israel, these stories barely register. Settlers and Palestinians exist in some distant land – a Wild West where cowboys and Indians come to blows until the army appears and puts an end to the fighting.

But, like the American South during Jim Crow, the authorities – including the security forces – have always been on the side of the settlers. More than that, the majority of settlements were established at the behest of successive Israeli governments. Whether it is the Labor Party or Likud in power, the settlement enterprise is an Israeli national project, through and through.

The first step to stopping such violence is understanding that these armed vigilantes are only the most extreme manifestation of Israel’s homegrown supremacism. They will be reined in only if the Israeli government decides that it wants to rein them in. And right now, we are far from that moment.

+972 Magazine is an independent, online, non-profit magazine owned and run by a group of Israeli and Palestinian journalists, providing fresh, in-depth reporting and analysis directly from the ground in Israel-Palestine.