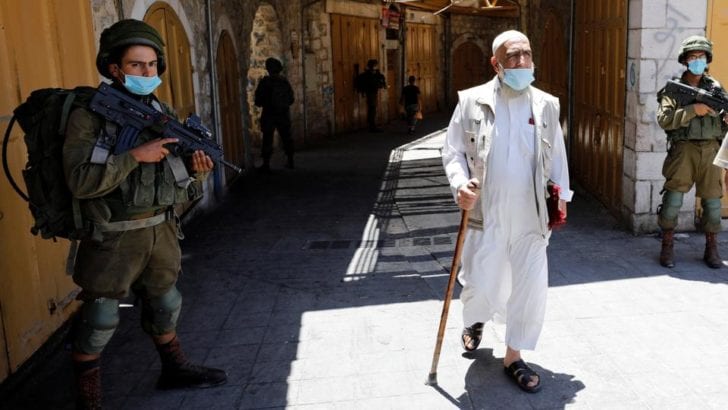 A Palestinian man passes by Israeli soldiers in Hebron in the Israeli-occupied West Bank, July 2, 2020.

The UN published its biweekly report on the humanitarian situation in the Palestinian territories. As usual, Israeli soldiers and settlers carried out arrests and attacks, and caused property damage, including uprooting hundreds of Palestinian farmers’ trees.

Two Palestinians reportedly attacked Israelis in two separate incidents and were subsequently shot; one was killed and the other injured. [NOTE: Israeli soldiers have been known to plant weapons on Palestinians.]

79 Palestinians, including 14 children, were injured across the West Bank in clashes with Israeli forces.

Israeli forces carried out 161 search-and-arrest operations and arrested 157 Palestinians across the West Bank. [NOTE: “search and arrest operations,” according to soldiers themselves, generally serve no purpose other than “to instill a sense of persecution among the Palestinians…a routine of exposure and invasion…a rolling trauma.” The effort is better characterized as “invasion and abduction” by a foreign army. See this.]

Two Palestinians sustained critical injuries in the Hebron governorate when unexploded ordnance they were handling exploded, in separate incidents.

On 18 January, two rockets were shot from Gaza towards Israel, following which, Israeli forces carried out airstrikes in Gaza.

On at least 47 occasions, Israeli forces opened warning fire near the perimeter fence or off Gaza’s coast, presumably to enforce access restrictions.

Israeli authorities uprooted about 1,370 Palestinian-owned trees on grounds that the land had been declared ‘state land’, and confiscated 237 sheep claiming they were grazing in an area declared as a nature reserve.

Eight Palestinians were injured and dozens of Palestinian-owned trees and vehicles were vandalized by perpetrators known or believed to be Israeli settlers.

One Israeli woman was injured and 27 Israeli-plated vehicles were damaged by perpetrators believed to be Palestinians in 26 incidents across the West Bank, according to Israeli sources. [NOTE: Saed Bannoura of International Middle East Media Center (IMEMC) stated that the occupation army has been known to inflate these figures, and pointed out that many more Palestinians are injured in an average month than Israelis.]