You Are Here: Home → Israeli harassment of Palestinian Bedouin village won’t let up 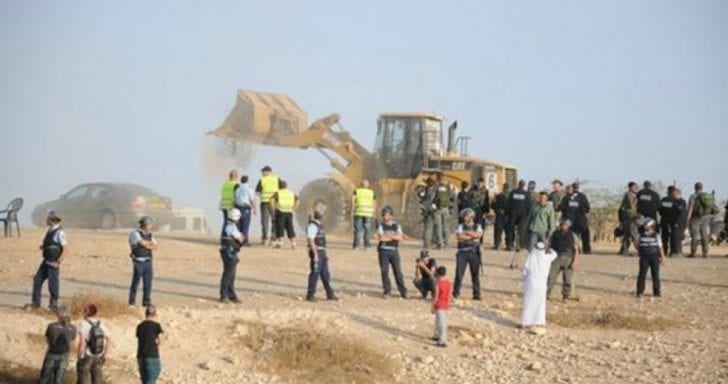 Israeli forces arrive on the site of Al Araqeeb to demolish what little is left of it.

Al Araqeeb, a Palestinian Bedouin village inside Israel, fights valiantly against the ethnic cleansing program of Israel. It’s a battle for the record books, and it isn’t over yet.

The International Middle East Media Center (IMEMC) reports that Israeli forces demolished the Palestinian Bedouin village of Al-Araqeeb on Wednesday, claiming the residents were trespassing on Israeli land. This cruel measure was just the tip of the iceberg.

The village was also demolished in 2010 under the same pretext.

In November 2019, I visited what’s left of Al Araqeeb, and had a chance to hear from the village leaders. Their story is heart wrenching – and it is not unique.

The Bedouin of this village are among approximately 200,000 desert-dwelling Palestinian residents of the State of Israel – citizens of a nation that calls itself a democracy. Between 80,000 and 90,000 live in “unrecognized villages” like Al Araqeeb, and are under constant threat of eviction. They are also blocked from Israel’s infrastructure grid, so they live without utilities, schools, and roads.

Israel claims this land is needed for two forests. Other villages are required to disperse for other reasons: a phosphate mine, a weapons testing facility, an expanding settlement, a military firing range, to name a few.

When we reached Al Araqeeb, it was late and the only light came from a generator-powered lantern. We sat on a tarp spread out on the ground, and one of the young men brought us tiny cups of traditional Arabic coffee.

The village leader, Sheikh Sayeh Abu Madi’am, arrived in an old pickup truck, greeted our group (activists from the US and EU), lit up a cigarette, and began to speak. His voice boomed with authority. Another young man translated his words, sentence by sentence.

Sheikh Sayeh was seventy years old, but he was not there to brag about his adorable grandchildren. He came to speak about the injustice he has lived with all his life. Like his neighbors, he has been harassed and humiliated by Israeli forces, spent time in prison, and rebuilt his home and village scores of times.

The people of Al Araqeeb are accused of trespassing – yet they have documents as old as the Ottoman Empire and from the time of the British Mandate proving their ownership of the land. They even have papers from the Israeli occupation, he exclaims, but all of these are not enough.

The sheikh pointed to his left, to the village cemetery. “This Islamic graveyard,” he explained, “was established in 1940. Where was Israel then? We have a well here that was dug in 1913.”

Years ago, the Israeli courts had decided to fine the residents of Al Araqeeb 1.8 million shekels (about $550,000) to cover the costs of the demolition of their village. The sheikh exclaimed, “from where are we going to get that kind of money? From where? We can’t get bread…There is no objective judge in the courts. They are all biased.”

In 2020, Israeli Supreme Court justices revisited their decision. They decided the fine was too high, and reduced it to 1.6 million shekels (about $490,000) – still the highest fine ever levied by the state on a Bedouin community.

The judges explained that this compromise grew out of “the state’s obligation to behave with equality and decency,” and its desire for “a solution that seems right and just for both parties.”

The attorney for the Bedouin, Khaled Sawalhi, was disappointed – though hardly surprised – by the ruling: “In effect, the court narrowed the many legal issues to questions of mathematics and dry calculations,” he protested.

The judges did not consider the injustice of evicting people from homes and land that have been theirs for generations. They did not even address the simpler unfair practice of fining Palestinian citizens who trespass, but not Jewish citizens who commit the same offense.

Electronic Intifada revealed in 2017 that Israel’s judges were under strict orders from Israel’s Justice Minister, then Ayelet Shaked, to “prioritize demographic concerns and maintenance of the state’s Jewishness over human rights.” Palestinians didn’t stand a chance.

Israel has steadfastly insisted on the expulsion of Al Araqeeb’s residents, punishing them for noncompliance over 180 times. But the Bedouin are steadfast in their pursuit of justice – and they look to the West for help.

We know very well how in the US, Israeli propaganda is dominating the streets, the Congress, and the media platforms, but we don’t understand why Israeli crimes have not been exposed in America…Israeli police tell us not to talk to international human rights agencies or journalists, but we do talk because we have nothing left to lose.

The biggest problem we have today is the funding from the outside that is responsible for our suffering. People who support Israel are taking Arabs off their land and demolishing houses with children living in them.

Please, feel with your hearts what you see with your eyes, the situation we’re in.

You are our ambassadors now.

The sheikh has fought against Israel’s system for as long as he can remember, and has not won the right to remain on his land. But he has not lost either, so there is hope.

Kathryn Shihadah is staff writer and news editor for If Americans Knew. She also blogs at Palestine Home.