You Are Here: Home → Khan al-Ahmar: tragedy and outrage 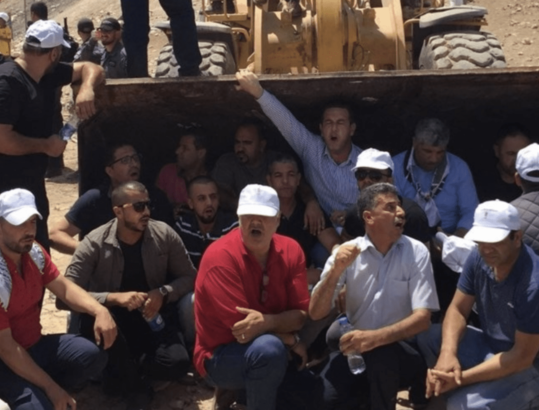 Residents and activists sit inside a bulldozer shovel in order to stop the demolition of Bedouin village Khan al Ahmar.

After years of threats and court battles, push has come to shove in the West Bank Bedouin village of Khan al Ahmar. Israeli soldiers with bulldozers have arrived to demolish every building. The world strenuously objects, but Israel doesn’t seem to notice.

Diplomats from 12 European countries came on Thursday 5 July to visit the tiny Bedouin village of Khan al Ahmar in the occupied West Bank. They echo the global outcry against Israel’s plan to demolish the village.

5 countries issued “an urgent official protest” against the demolition plan.

Around 180 Bedouin, who raise sheep and goats, live in shacks in Khan al Ahmar. Half of the residents are children.

International attention was drawn to the village when, on Wednesday, 4 July, Israeli occupation forces with bulldozers assaulted Bedouins and activists who were protesting the demolition.

According to the Red Crescent, 35 protesters and residents were injured. Several police officers were lightly injured; 11 protesters were arrested.

Police reported that some of those present threw stones.

The area around Khan al Ahmar is closed to the general public as Israeli authorities begin construction on a road to enable the eviction to take place. An IDF source indicated that the actual demolition will not take place for a few days or weeks.

These actions by Israel – forcible transfer of population and confiscation or destruction of private property – are prohibited by international humanitarian law and violate basic human rights. 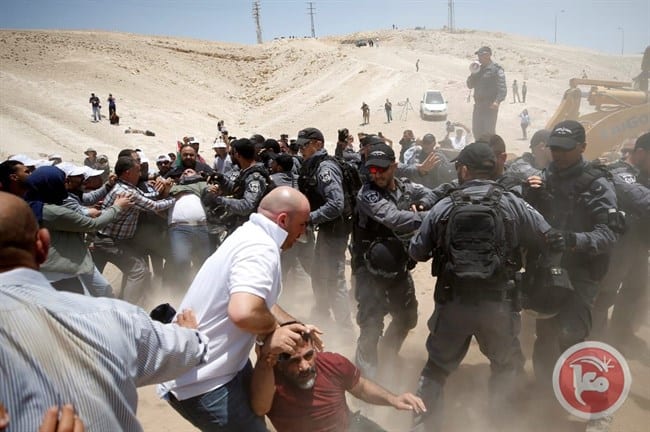 The people of Khan al Ahmar were ethnically cleansed from their previous homes in the Negev desert in 1951, and resettled in their current location near Jerusalem, in Israeli-controlled Area C.

Since 1967, Israel has been appropriating land in the vicinity in order to build and expand 2 nearby illegal settlements, Ma’ale Adumim and Kfar Adumim. Khan al Ahmar is squeezed between them, and if the village is demolished, Israel will be able to link the settlements and take over a large swath of the West Bank.

On 5 March 2017, every structure in the village of Khan al Ahmar – including the school, mosque, clinic, and every home – was placed under demolition orders. The villagers were given 7 days to demolish their own village.

Thanks to a court injunction, the process was put on hold for over a year.

But in May 2018, Israel’s High Court of Justice approved the demolition of the village, citing illegal construction of buildings. As is the case all over Area C, Palestinians who apply for construction permits are routinely denied permission and therefore are compelled to build illegally. Even applications to build a school and a clinic were rejected. 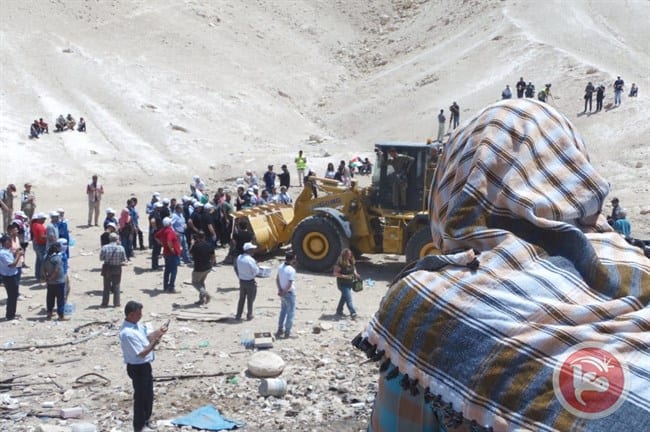 The Palestinian Ministry of Foreign Affairs strongly condemned “the ethnic cleansing of Palestinians by the occupation authorities in the designated areas (C) and in the occupied city of Jerusalem and its environs.”

Liz Throssell, spokesperson for the UN High Commissioner for Human Rights, released a statement calling upon Israel not to demolish Khan al-Ahmar; the statement emphasized that the forced removal of its residents and destruction of private property are violations of international law.

The European Union also condemned Israel’s actions, declaring that the demolition, and the subsequent plans to extend illegal settlement , undermine hopes for a viable peace in the context of a two-state solution.

Apparently no comment has been made about the issue by either Donald Trump or anyone in his administration.

Israeli authorities they have offered villagers an alternative site about 7 miles away, but the residents of Khan al-Ahmar are not interested.  The new site is next to a landfill and an IDF camp; it does not provide enough space for their animals to graze.

Palestinians in Khan al-Ahmar vowed to never abandon their land.

Faisal Abu Dawoud, a 43-year-old resident, explains: “We have been living here since 1951. My grandfather, my father and me…It is impossible for us to leave this place. Even if they arrest all of us and force us out, we will return.”

“I was born here and will not move anywhere else,” said Feisal Abu Dahok, 45. “If they destroy the village, we will build it again here or nearby.”

Palestinian Liberation Organization Executive Committee Member Dr. Hanan Ashrawi stated that “the protection of the people of Palestine is long overdue. Seventy years after the creation of Israel and the dispossession and displacement of Palestinians continues.”

“The expulsion of Palestinian families then and now and the forcible transfer of our indigenous population to a state of homelessness and despair is completely unacceptable.”

Ashrawi stressed that the plan to demolish an entire village for the sole purpose of expanding an illegal West Bank settlement is outrageous and inhumane.

She called on the Israeli government to cancel its “unlawful plans” immediately.

Ashrawi continued, “words of warning to Israel are not enough. If there is no serious intervention from the international community towards the Israeli government and its belligerent military occupation, other villages will be next, and more Palestinian men, women and children will be displaced for another 70 years to come.”

“Justice for the Palestinian people can no longer wait.”