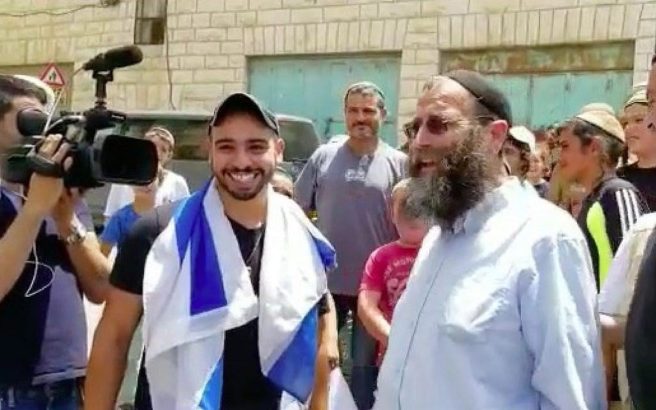 Elor Azaria shot a seriously injured, unarmed Palestinian in 2016 and served a short sentence in prison. When he returned to the scene of his crime, he was treated not like a criminal, but like a prince. Palestinian life is clearly of little value to Israel and many Israelis.

[Editor’s note: IMPORTANT BACKGROUND: On 24 March 2016, 2 Palestinians attacked and lightly injured an IDF soldier in Hebron. Nearby soldiers opened fire, killing one and seriously wounding the other. A few minutes later, reinforcements arrived, including Elor Azaria, a medic. He approached the wounded and unarmed man, who was lying on the ground, and fatally shot him in the head. The entire incident was caught on film by a B’tselem observer and went viral.

At first, Azaria was charged with murder, but the charge was downgraded to manslaughter, as well as “conduct unbecoming of a noncommissioned officer.” He was convicted of manslaughter. (His 18-month sentence was later reduced to 14 months.)

At the announcement of the conviction, PM Benjamin Netanyahu called for pardon for Azaria, declaring, “This is a difficult and painful day for all of us – and first and foremost for Elor and his family.”

After serving 9 months, Azaria was freed on 8 May.]

Elor Azaria, an Israeli soldier that shot and killed a wounded terrorist in Hebron and was released two months ago from prison, returned on Tuesday for the first time to the site where the shooting took place.

Azaria, who visited Hebron with his parents, was invited by the residents of the Jewish community in the city for a toast. A source in the settlement told Haaretz that it was not an official invitation from the settlers’ committee, but rather a private invitation.

Azaria was wrapped in the Israeli flag, and joined by many of the settlers in the area, among far-right activists. One of the settlers told Azaria: “There were dozens of stabbings before, and after the incident here, there were no stabbings here. Apparently, the terrorists understood that they were not coming out alive.” In practice, almost every week Palestinians carrying knives in Hebron are detained by the security forces, especially around the Tomb of the Patriarchs.

Ofer Ohana, a local resident, told Azaria: “The two terrorists who came here and tried to kill IDF soldiers are melting in their grave, and you are here. Build your life, the dogs bark, and the convoy of the Jewish people gallops forward.” Azaria waved the Israeli flag and took part in the toast, and was greeted by cheering: “Elor Azaria, I wanted you to know how many people love you in Hebron.”

On May 8, Azaria was released from military prison after nine months. The parole board shortened his sentence by a third and released him two days earlier because he wanted to attend his brother’s wedding.

Azaria was convicted of shooting Abdel-Fattah al-Sharif in March 2016 while al-Sharif was lying wounded on the ground. The military court sentenced Azaria to 18 months in prison, stating that Azaria did not shoot out of a sense of danger, but because he decided that “the terrorist deserved to die.” The Court of Appeals rejected the appeal of his conviction and the severity of the sentence. The prosecution’s appeal was also rejected.

Israeli children are dressing up as Elor Azaria, who shot prisoner in the head as he lay on the ground (VIDEO)