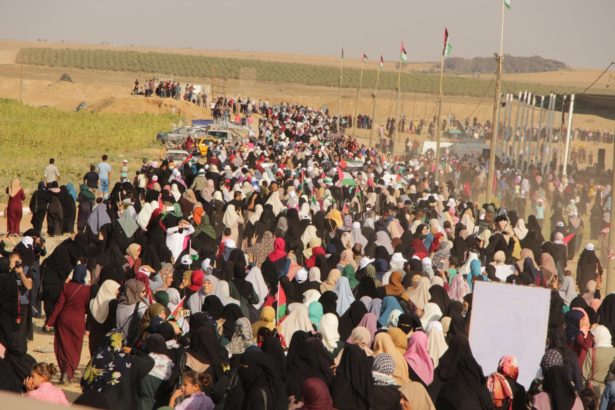 Thousands of women from all over Gaza participated in their own Great March of Return.

July 3rd marked the first Great March demonstration specifically by and for the women of Gaza, in honor of their steadfastness in the face of siege. Thousands participated, including a small Jewish contingent in Israel; at least 134 were injured.

Photos of the March and stories from some of thee women are inspiring.

‘Resistance is Female’: Gaza women protest for their right of return

Hundreds [editor’s note: most sources report thousands] of Palestinian women and girls gathered on Tuesday near the eastern fence separating the coastal enclave from Israel, in what the organisers called the “Palestinian Women for the Return and Breaking the Siege” protest.

In a press conference held in Gaza on Monday, the Higher National Commission of the Great March of Return and Breaking the Siege called on Palestinian women to “widely participate in the protest” and call for their right of return.

“This event comes to support the Palestinian women who are still steadfast despite the siege. It holds a clear message; that no one can deny our rights, especially the right of return and our demands to lift the siege” said Iktimal Hamad, a commission women’s committee chair.

Mothers, wives, daughters and sisters of those killed and injured during the Great March of Return protests, as well as female journalists and university students, held Palestinian flags and signs calling for the right of return and affirmed their willingness to keep the protests alive.

“Who said women cannot fight just as effectively as men?” exclaimed Suheir Khader, 39, who came to the gathering with her family and friends.

“We were brought up on the fact that resistance is female. Our grandmothers always assisted our grandfathers and fought along with them during the Nakba and the first Intifada.”

“I am here today because we [women] cannot just sit there and watch our fathers and husbands being killed and injured. It is our duty to at least share this struggle with them,” added Khader.

Women injured during the protests also participated in Tuesday’s protest, calling for their right to medical treatment and demanding the right of return.

Amani al-Najjar, 25, said that nothing can prevent her from attending the protests, “not even my injury”.

“I got injured with a tear gas canister to the chest during the third week of the protests,” she explained. “Three days later after I started recovering, I came back here to protest again.”

Najjar, whose brother was killed by an Israeli sniper while participating in protests near the eastern fence last year, said: “I am here to continue what my brother started. If they [Israeli soldiers] killed him to intimidate us and force us to stop, they are wrong. They just gave us another reason to continue.”

The Great March of Return protests kicked off on 30 March, and have continued for the fourth month in a row, to demand Palestinians’ right of return and and end to the Israeli blockade on Gaza.

Um-Khaled Loulo, 71, said she has been attending the protests at least once a week with her sons and grandchildren. “I always bring my grandchildren here to teach them about the right of return practically,” she told MEE.

“I do not let them approach the fence because I know Israeli soldiers will spare no effort to shoot them, but at least they get to understand that returning to their original homeland is something to fight for when they grow up.”

Loulo added that bringing her grandchildren to the protests is part of teaching them basic life values, and raising them up to defend their rights.

“I bring them here every week and we start chanting national songs. This is how you raise a child under occupation.”

Loulo said she used to participate in protests and throw stones at Israeli soldiers when she was younger.

“The woman is equal to the man at home and on the front lines. If he is fighting for a cause, so does she,” she added.

Israa Areer, a 26-year-old journalist thinks that the participation of women in the Palestinian struggle is “nothing new”.

“More than 60 years ago, my grandmother kicked the Israeli soldiers outside her home when they tried to detain her husband and children. This, too, is a form of resistance.”

Areer said although the Israeli authorities disengaged from the Gaza Strip in 2005, they are directly “affecting and controlling Palestinian women’s lives”.

“Although Gaza is not occupied, the Israeli authorities are still practising all forms of oppression against women by imposing a severe blockade that deprives them from their basic rights,” she added.

“Palestinian women did not only raise freedom fighters, but also fought along with them and protected them against the occupation for several decades,” she said.

A group of about 50 activists gathered and marched in solidarity on Israel’s side of the Gaza border Tuesday evening during the first planned women’s march of the ongoing Gaza protests.

After meeting near Kibbutz Nahal Oz, one of the Israeli communities located closest to the border, the mostly female group spoke via cellphone to one of the women organizers of the protest in the Gaza Strip.

“She thanked us for our support and said it’s very important to them,” said Ghadir Hani, who translated the organizer’s words from Arabic to Hebrew.

“She talked about the power of women and how Four Mothers helped Israel come out of Lebanon and how women have the power to make the change.”

Hani, a member of the grassroots political and social movement Standing Together, said that she preferred not to identify the organizer in Gaza by name. Standing Together organizes Jews and Arabs around campaigns for peace, equality and social justice, and the group co-organized Tuesday’s solidarity event with a group of residents from the Gaza border communities called Other Voice.

Dr. Julia Chaitin, from Kibbutz Urim, spoke to the Gazan organizer on behalf of Other Voice.

“I told her that here on this side of the border we are about 50 [people],” said Dr. Chaitin. “For 10 years we’ve been saying that the siege has to end. That we don’t see them as enemies, we see them as our neighbors, and that our leaders and their leaders don’t want to make the change so it’s up to us to make the change.”

After the phone call, about half of the group walked or drove about a mile through Israeli agricultural fields to a lookout spot where Gazan protestors were visible on the other side of the border. Women held up signs with slogans like “A Future of Dignity and Hope on Both Sides of the Border” and “Stop the Next Gaza War” while sirens rang out and the Israeli army fired tear gas canisters at the protestors, much of which was carried back toward the Israeli group by the wind…

In Gaza it was reported that the Israeli army used crowed dispersal measures, firing tear gas canisters and smoke grenades at the march. Palestinian reports also said that three people were wounded by live Israeli fire at the rally, near the fence and east of Gaza City.

Three women were shot and injured on Tuesday by live bullets fired by Israeli soldiers stationed at the border with Gaza and over 130 others received various kinds of injuries, according to WAFA reporter and the Ministry of Health.

Thousands of women staged a protest at the border as part of the March of Return activity that started on March 30.

Soldier stationed at the Israeli side of the border opened fire at the protesters injuring 134 women and journalists covering the event from tear gas and other injuries, said the Ministry of Health.

Three women who reportedly approached the border fence were shot by live bullets and transferred to Shifa Hospital in Gaza for treatment.

Israel murdered over 130 Palestinians in the border protests, including medics and journalists, and injured over 14,000 others. 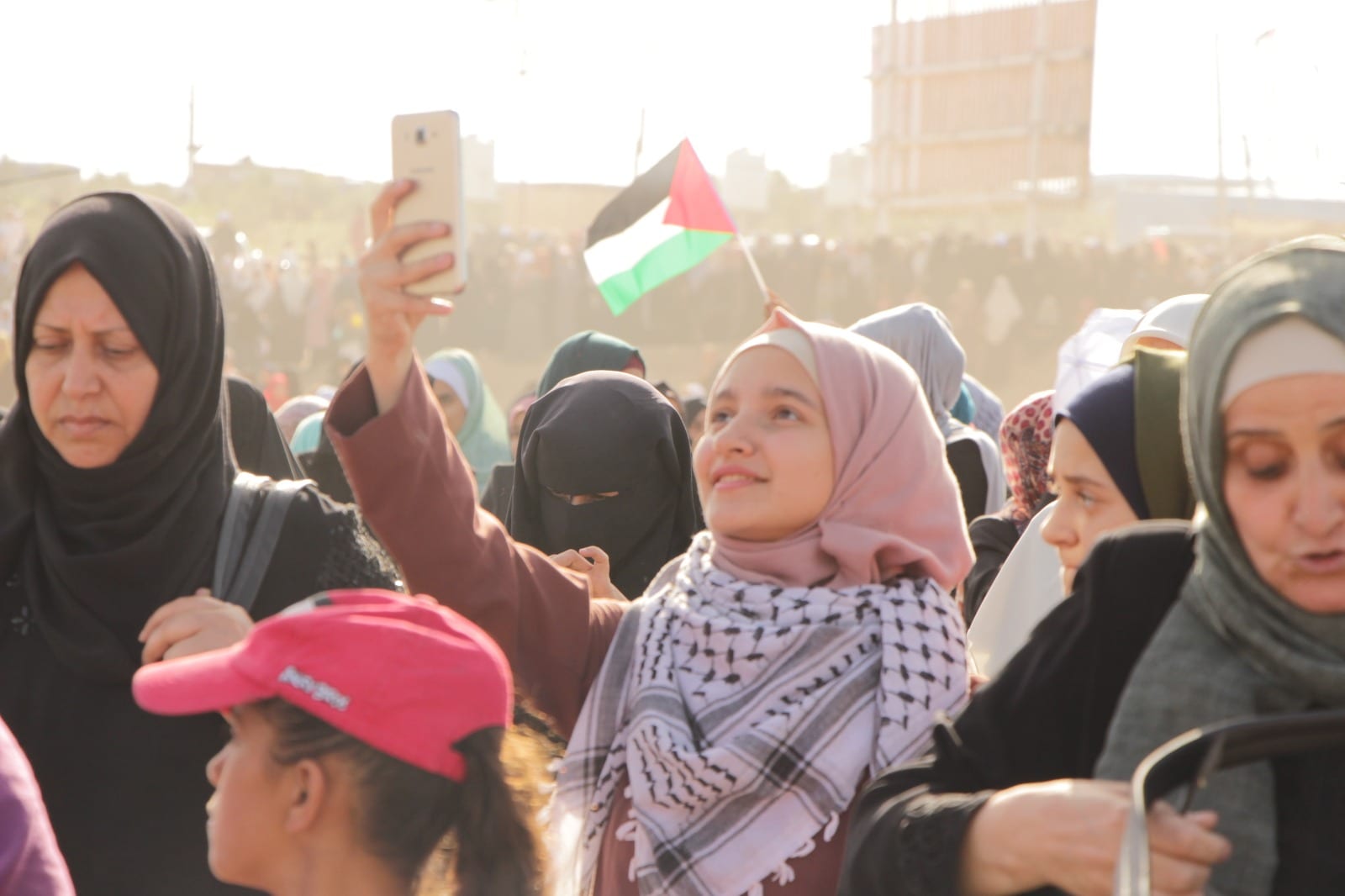 At least 134 Palestinians have been wounded by Israeli gunfire as thousands of Palestinian women demonstrated along the heavily fortified fence with Israel in the besieged Gaza Strip.

Ashraf al-Qudra, spokesperson for Gaza’s health ministry, said in a statement on Tuesday that media representatives covering the event were among those who were injured at the scene, east of the enclave.

The protest was the first mass women’s demonstration to take place in the strip since popular protests calling for Palestinians’ right of return began on March 30 in the strip.

Palestinians in the strip have taken part in the protests, dubbed the Great March of Return, calling for their right of return to the homes from which they were expelled from in 1948 during a violent ethnic cleansing campaign that forcibly expelled more than 750,000 Palestinians from their towns and villages.

They have also been demonstrating against the Israeli-Egyptian land, sea and naval blockade that has been in place since 2006, when Hamas – the party governing the strip – came to power.

Women on Tuesday arrived in buses from across the port city, home to more than two million people, many accompanied by their children.

They moved in groups to within 50 metres of the fence, AFP reported.

“I came to finish the march that my daughter had started,” Rim Abu Irmana said, waving a picture of her 15-year-old daughter, Wasal, who was killed by live Israeli ammunition on May 14 – the same day more than 60 other Palestinians were also killed.

May 14, which commemorated the 70 years since the Nakba, coincided with the controversial US embassy move from Tel Aviv to Jerusalem.

“These demonstrations are peaceful. We are only defending our land and our rights,” said Irmana, holding the hand of her young son.

Since the protests began on March 30, Israeli forces killed at least 138 Palestinians.