You Are Here: Home → Thanks to pervasive Israel-centric myths, Australia ends direct aid to Palestinian Authority 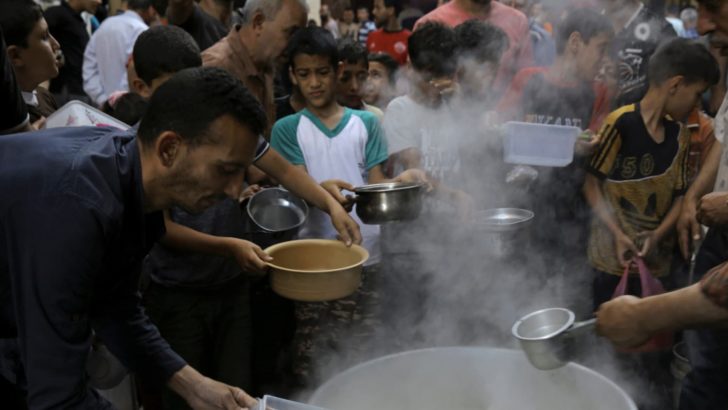 Palestinians line up to receive porridge portions in Gaza City, May 31, 2018. Credit:Adel Hana/AP

Amid occupation and blockade, Palestinians count on international aid to get by. But now, thanks to pro-Israel talking points on how the PA distributes money, Australia has decided to end its direct aid program. In Foreign Minister Julie Bishop’s words, Palestinians should no longer be able to “use our aid to free up money in its budget for state-promoted terrorism.”

Australia has ended direct aid to the Palestinian Authority because it says its donations could increase the self-governing body’s capacity to pay Palestinians convicted of politically motivated violence.

[Editor’s note: the Palestinian Authority’s program of compensation for families of Palestinians who have been imprisoned, injured, or killed, has been widely misunderstood, thanks to Israeli propaganda. The alleged “pay to slay” program is a social safety net for families who have lost their breadwinner, not an incentive to commit violent acts.

Whenever this viewpoint is advanced, the real culprits in the Palestinian tragedy – the Nakba, the occupation, and the blockade – are forgotten, and Palestinians are blamed for their own adversity. See The Legitimacy of Family Compensation for Palestinians Killed, Injured, and Imprisoned for a detailed analysis of the issue.]

Foreign Minister Julie Bishop said Monday that funding to a World Bank’s trust fund was cut after she wrote to the Palestinian Authority in late May seeking assurance that Australian funding was not being misspent.

“I am confident that previous Australian funding to the PA through the World Bank has been used as intended. However, I am concerned that in providing funds for this aspect of the PA’s operations there is an opportunity for it to use its own budget to (fund) activities that Australia would never support,” Bishop said in a statement.

“Any assistance provided by the Palestine Liberation Organization to those convicted of politically motivated violence is an affront to Australian values and undermines the prospect,” Bishop added.

[It is worth mentioning that, according to the Department of Home Affairs, the Australian Values Statement includes freedoms such as “mutual respect, tolerance, fair play, compassion,” and “equality under the law.” Israel’s government is sorely lacking in the practice of these values toward its own Palestinian minority as well as its Palestinian neighbors. This would suggest that Australia ought to reconsider its ties with Israel, not the occupied Palestinian territories.]

Palestinian President Mahmoud Abbas’ bureau told Haaretz that Palestinians are in direct contact with the Australian government over the past several hours following the announcement that Australian aid to the Palestinian Authority will end.

Australia allocated AU$43 million for humanitarian assistance in the region for the current fiscal year, which began on July 1.

In March, Israeli Prime Minister Benjamin Netanyahu praised the U.S. government for passing a law that suspended some financial aid to the Palestinians over the stipends paid to families of Palestinians killed or jailed in fighting with Israel.

The Taylor Force Act, named after an American killed in Israel by a Palestinian in 2016, was folded into a $1.3 trillion spending bill signed by President Donald Trump.

[The Taylor Force Act speaks directly to the issue of financial assistance to the families of Palestinians imprisoned, injured, or killed by Israeli forces, and categorically ignores the facts – including facts about Americans who have been killed by Israel.]

Netanyahu called the law a “powerful signal by the U.S. that changes the rules” by cutting “hundreds of millions of dollars for the Palestinian Authority that they invest in encouraging terrorism.”

The Palestinians say the families are victims of violence. Palestinian official Nabil Abu Rdeneh condemned the law, saying it doesn’t “allow for the creation of an atmosphere conducive to peace.”

Australian government lawmaker Eric Abetz welcomed Bishop’s stance. “Minister Bishop’s strong and decisive decision today to ensure that the Palestinian Authority can no longer use our aid to free up money in its budget for state-promoted terrorism is very positive,” Abetz said.

“It is vital that we ensure that our foreign aid is not being spent on, or making money available for, the promotion of terrorism and so funneling our aid to the Palestinian Territories through the United Nations will provide greater assurance that the Palestinian Authority’s clever accounting cannot occur,” he added.

[The editors suggest that Australia’s government study Israel’s racist policies and state-promoted terrorism, and determine whether Palestinians are indeed deserving of the indictment.]

Taylor Force Act about to sneak through Congress, perpetuating oppression of Palestinians