You Are Here: Home → Israeli demolition of entire Palestinian villages continues with no end in sight (includes videos) 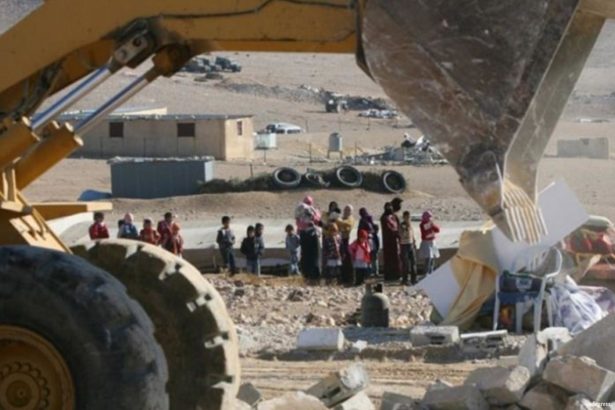 Stories keep pouring in of Israel demolishing Palestinian villages; many of the buildings destroyed were donated by EU organizations; schools have been razed; residents are often required to pay tens of thousands of dollars for the destruction of their own homes; nearly 160,000 Bedouins live in “unrecognized” villages built before 1948 that Israel has designated “illegal” and threatens with demolition. Below are three reports, followed by videos and documentaries about previous demolitions:

The Israeli army demolished, Thursday, the Bedouin village of al-Arakib, in the Negev desert, for the 121st time, rendering all families homeless, yet again. The village was demolished 121 times, while the latest demolition before this one was carried out on October 25.

The village has been under constant invasions and demolitions; its inhabitants have land deeds and receipts of paid taxes dating back to Ottoman times, but the Israeli authorities do not accept these as valid.

The figures above are only for the August demolition, in addition to all accumulated costs of the ongoing Israeli demolitions and destruction of the village since 2010, with a cumulative cost of approximately 1,902,607 Shekels (541,000 USD).

There are 35 Bedouin villages that are not recognized by Israel; nearly 160,000 Bedouins live in “unrecognized” villages in the Negev, built before 1948, but remain “illegal” under Israeli law and face constant threat of demolition and displacement.

In 2005, Israel approved the so-called “Negev Development Plan,” aimed at building shopping centers and tourist areas, but at the same time displacing around some 65.000 Bedouins living in what Israel refers to as “unrecognized villages.”

The plan calls for annexing more than 700,000 Dunams (185329 acres) and displacing the residents by demolishing 14 villages in the area. Al-Arakib village is one of the most impacted “unrecognized villages” in the Negev.

All unrecognized villages in the Negev are under continuing Israeli attacks and violations, as Tel Aviv does not recognize the residents’ right to live on the land — land they inhabited before the 1948 creation of the state of Israel in historic Palestine.

Israeli Prime Minister Benjamin Netanyahu has decided to displace and remove dozens of Palestinian Bedouin families living in their communities around occupied East Jerusalem, after deeming their dwellings as “illegal,” to replace them with colonists.

His decision was made after meeting with representatives of the so-called “Jerusalem Belt Forum,” which is actively involved in displacing the Palestinians and replacing them with Israeli colonist settlers, in direct violation of International Law.

The group aims at removing the Palestinians, their residences and dwellings, near Maale Adumim colonies, and held their meeting with Netanyahu, on Thursday evening.

Israeli National News has reported that the meeting was also attended by officials of Netanyahu’s office, in addition to Boaz Ido, who is a board member “Jerusalem Belt Forum,” the head of the Benyamin Regional Council of Settlements, Roni Snir, the head of Gush Katif Council, Danny Tirza, Field Coordinator Yaniv Aharoni, and Kfar Adumim resident and ‘social activist’ Avichai Shurshan.

The group presented Netanyahu with what they called “activities and achievements,” in addition to maps and aerial photographs of constructions in Bedouin communities, financed by the European Union.

The indigenous Palestinians in that area live in tents, mobile homes and several structures, in the area between Maale Adumim and Mitzpe Yeriho colonies.

Israeli Ynet News said that Netanyahu ordered the removal of what was described as “illegal outposts,” and to relocate the inhabitant in Abu Dis town, near Jerusalem, and Jericho.

The Arabs48 news website has reported that Israel is trying to displace what is left of the Bedouin communities in occupied Jerusalem to build and expand its illegal colonies, and link Maale Adumim with Jerusalem.

Israeli National News has reported that Netanyahu ordered his office, the police and the military to increase their deployment and enforcement, and to ensure the removal of the Palestinian communities, dubbed as “illegal outposts.”

On its part, the “Jerusalem Belt Forum” said after the meeting with Netanyahu that they “congratulate him for his willingness to resolve the problems presented to him, regarding the illegal construction carried out by European Funding,” referring to EU projects that tries to help in creating basic infrastructure and to improve the lives of the communities.

It is worth mentioning that the so-called “Jerusalem Belt Forum,” a heavily financed group active in the illegal construction and expansion of Israeli colonies, has been conducting various campaigns to stop what it refers to as “illegal Palestinian constructions,” and to remove the Bedouin committees to “house them in a Bedouin village near Jericho.

Bedouins living around Jerusalem, reside in Area C of the occupied West Bank, and are protected inhabitants under International Law, International Humanitarian Law, and all related protocols and agreements, but are constantly displaced, similar to what is happening in the Negev.

Israel’s colonies in the occupied West Bank, including in and around occupied East Jerusalem, are illegal under International Law and the Fourth Geneva Convention.

On Friday at dawn, Netanyahu ordered the army to remove all Bedouin Palestinians living in their communities, close to Road #1, leading to the Dead Sea.

The army also handed eviction orders to the Bedouin families in Jabal al-Baba area, near al-‘Ezariyya, east of Jerusalem, ordering them to leave dwellings they inhabited for more than fifty years, after they were displaced from the Negev.

Arabs48 quoted resident Atallah al-Jahalin stating that he was born there 43 years ago, in the same dwelling were 57 families, half of them children, reside.

Wafa reported that staff from Israel’s civil administration, backed by Israeli army, reportedly stormed the village and ordered its residents to leave their homes.

Jabal Al-Baba, according to Wafa, consists of 100 buildings, 58 of which are houses, while the rest are structures used for agriculture. “Because the community is unrecognized, the people in Jabal al-Baba live without electricity and get water only from tanks filled by trucks,” Wafa said.

Israeli forces have demolished dozens of homes in Jabal al-Baba area, many of them built with assistance from the EU and humanitarian organizations, over the past few years.

In August, Israeli forces demolished a Kindergarten school in the village.

The hill is populated by some 55 Bedouin families who have inhabited the area for 65 years, and face constant threat of being expelled from their homes.

Some 90 Palestinian Bedouins, the majority of them children, were left homeless when Israeli forces disassembled EU-donated mobile homes in the Jabal al-Baba in May 2016.

Jabal al-Baba, like other Bedouin communities in the region, is under threat of forcible transfer by Israel for being located in the contentious “E1 corridor” set up by the Israeli government to link annexed East Jerusalem with the mega settlement of Maale Adumim.

Israeli authorities plan to build thousands of homes for Jewish-only settlements in E1, which would effectively divide the West Bank and make the creation of a contiguous Palestinian state — as envisaged by the two-state solution to the Palestinian-Israeli conflict — almost impossible.

Rights groups and Bedouin community members have sharply criticized Israel’s relocation plans for the Bedouin residing near the illegal Israeli settlement of Maale Adumim, claiming that the removal would displace indigenous Palestinians for the sake of expanding Israeli settlements across the occupied West Bank in violation of international law.

If you find our information valuable, please donate so we can continue our work.