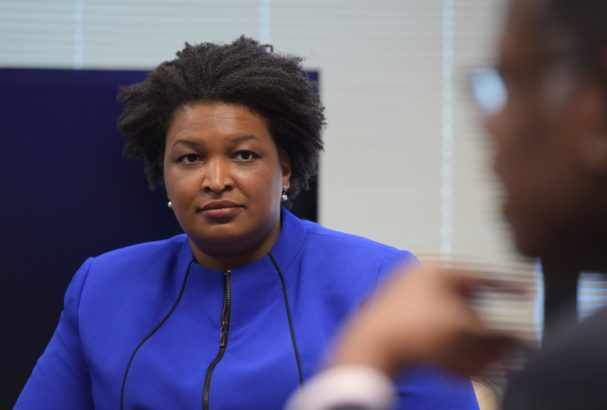 Stacey Abrams, candidate for governor of Georgia, at 2016 Democratic National Convention. Abrams and other candidates are being pushed to support Israel, despite its human rights abuses and damaging actions against the U.S.

The Israel lobby works throughout the United States to ensure that the U.S. will continue to give Israel over $10 million per day – 7,000 times more on average than to others around the world.

Israel partisans pressure and entice candidates at all levels of government to support Israel and to pass legislation that benefits that foreign country. Even races at the state level, which are normally focused on issues within a state, are subject to pressure from this special interest lobby, whose donors often call the shots. (An example in California is here.)

In the current race for governor of Georgia, we see this playing out once again. Two leading candidates seem to feel they must declare their support for a foreign country with an apartheid-like system that discriminates against Christians and Muslims, that commits violent acts of aggression that violate international law, attacked a US Navy ship and frequently spies on the U.S. and steals American technology. Below is a report on the current race (photos and italicized statements have been added):

Georgia 2018: Stacey Abrams’ stance on Israel under scrutiny in race for governor

A prominent Jewish developer slammed Democrat Stacey Abrams for her vote against legislation that required firms bidding for state contracts to certify that they aren’t participating in an economic boycott of Israel.

Steve Berman, founder of OA Development, wrote in the Atlanta Jewish Times that he was disappointed that Abrams was one of only a handful of legislators to speak against the bill on the Georgia House floor. He also claimed that she “refused” to meet with pro-Israel activists about the measure targeting “boycott, divestment and sanctions” campaigns.

Abrams published a lengthy response to the op-ed on Medium late Wednesday, calling herself an “unwavering ally” to the Jewish community. She said she rejects the “demonization and delegitimization of Israel” represented by the BDS campaign.

[She also said she has been “a repeat attendee at AIPAC’s annual legislative event in Georgia” and has “consistently supported our state’s investment in Israel.” Abrams went on an all expenses-paid trip to Israel in 2011 organized by a pro-Israel advocacy organization.]

But she said she voted against the measure because it could set a precedent “that could prevent a 21st century campaign similar to the actions taken by civil rights fighters” such as the anti-apartheid movement of the 1980s.

From her piece: “Leveraging this law, angry state actors could prevent future movements from taking root in Georgia by allowing the state to cut off funds for participation in a boycott grounded in a different injustice. My fears are not speculative. Just this year, the Republican legislature approved a measure to deny funding to private colleges that supported efforts to shield undocumented students from draconian federal immigration tactics. I staunchly opposed this bill as well.”

Abrams, who was the top Democrat in the House, also said the caucus discussed the legislation but never took a position because of the “complicated nature of the bill.” She met with anyone who requested to speak with her about the issue, she added.

Her Democratic opponent, Stacey Evans, voted for the measure.

But several other high-profile Democrats voted against it, including current House Minority Leader Bob Trammell and Carolyn Hugley, the party’s second-ranking official.

AIPAC, the influential pro-Israel lobby, has long been a top proponent of the push in state legislatures to pass laws formally condemning the BDS movement. AIPAC contends that the BDS campaign “dishonestly equates former apartheid South Africa with present-day Israel in order to enlist people of conscience” to their side. [South African anti-apartheid leader Bishop Desmond Tutu likens Israel’s actions to apartheid and supports the boycott movement.]

Abrams’ campaign pointed to Lois Frank, a well-known activist in the Jewish community who vouched for the candidate’s “longstanding ties to our community.” [Frank is on the board of the organization that took Abrams to Israel in 2011. She is an Israeli citizen.]

“She has taken the time to share her experience and voting record with me. I believe that she is a principled leader who has been – and remains – a friend to the Jewish community,” said Frank.

Foreign policy in the Middle East factored into Georgia’s last race for governor, too, when Gov. Nathan Deal tried to tie Democrat Jason Carter to his grandfather’s view of Hamas, the militant faction that the U.S. considers a terrorist group. Former President Jimmy Carter called for Hamas to be recognized as a legitimate political actor in the closing months of the campaign.

Greg Bluestein is a political reporter who covers the governor’s office and state politics for The Atlanta Journal-Constitution.

Anti-BDS legislation is being promoted across the country at both the federal and state level, sometimes driven by dual citizens. So far, it has been adopted in at least 24 states. More information here.

Pro-Israel pressure on Georgia candidates has been known for many years. Former Congressional representative Cynthia McKinney discusses the system in the interview below:

[The campaign governor is seen as a watershed event and is drawing participation from individuals across the country; race is also sometimes being brought in.]

If you find our information valuable, please donate so we can continue our work.