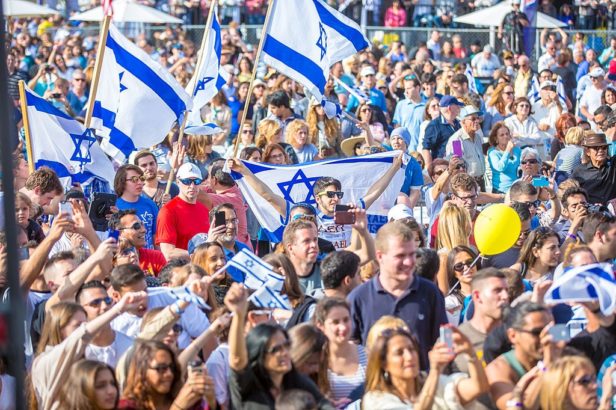 Israeli American Council’s “Celebrate Israel Festival” in Miami, Florida. Such festivals were organized across the U.S.

The Israeli American Council is a ten-year-old organization of dual US-Israeli citizens. A year ago it launched a lobbying arm, the Israeli American Coalition for Action, which has been the driving force and partial architect of anti-BDS laws passed in Nevada, California and Texas and is currently advancing similar legislation in Massachusetts.  It also helped promote the “Taylor Force Act” and other bills for Israel.

A recent article in New York Jewish Week by Orly Santo reports that ten years ago “in a feat of organizational prowess (and hubris?) — and fueled with tens of millions of dollars from megadonors — the Israeli-American Council (IAC) shaped the scattering of 500,000-to-700,000 Israeli expats into a coherent entity.”

The goal of the organization is to “strengthen Israeli-Americans, American Jews and Israel.” It now claims 250,000 participants with an annual budget of $17.5 million. The group gets the bullk of its money from Las Vegas casino billionaire and major Republican donor Sheldon Adelson.

In February 2016 IAC launched a 501(c)(4) lobbying arm called the “Israeli American Coalition for Action” (IAC For Action). The excerpt below from Jewish Week describes how IAC Action has helped to craft legislation against boycotting Israel, against alleged “antisemitism,” and against Palestinians.

Below that article is a report from Moment magazine that describes the specifics of how IAC obtained legislation against BDS. (Photos and videos of IAC have been added to the articles.)

US Senator Chuck Schumer (who says he is a “guardian for Israel”) and others speak at the IAC conference.

Excerpted from “Israeli-Americans Now Have A Voice — Are They All On Key?”

In the 21 months of its existence, the Israeli American Coalition for Action has weighed in on a range of state and federal issues, with varying degrees of success. It has advanced mom-and-apple-pie resolutions, such as pushing a House resolution honoring Israeli-American heritage and an initiative to teach Hebrew in public schools.

But it has also tackled trickier legislation. For instance, IAC for Action was the driving force and partial architect of the anti-BDS laws passed in Nevada, California and Texas. It’s currently advancing similar legislation in Massachusetts, and working alongside these state governments on creating watchdog organizations that would help enforce anti-BDS laws. (Some of the anti-BDS laws around the country are now being challenged on free speech grounds.)

The group has advocated for a House bill that would combat European anti-Semitism [for information on this go here] and supports the Israeli Anti-Boycott Act, legislation that recently lost its bipartisan support in the House and Senate after the ACLU denounced it as a First Amendment infringement.

Arguably, IAC for Action’s most significant legislative push has been on the high-profile Taylor Force Act bill, named for the 28-year-old American who was killed by a Palestinian terrorist in Jaffa in March 2016; it was among the first pro-Israel lobbies to aggressively campaign for the legislation.

Considered one of the most important pro-Israel initiatives of the early Trump administration, the bill would condition the majority of U.S. financial aid to the Palestinian Authority (PA) on the PA shutting down its “Martyr’s Fund,” a program that pays stipends to convicted terrorists [sic] and their families. Introduced by Republican Sens. Lindsey Graham of South Carolina, Dan Coates of Indiana and Roy Blount of Missouri, the bill initially lacked necessary bipartisan credentials; some Democrats believed the bill was drawn too broadly and that other kinds of American aid to the PA, such as money for humanitarian programs, would be cut off as a result. Out of concern for Israel’s security or out of partisan concerns, AIPAC and the major Jewish advocacy groups steered clear [initially].

[Read the specifics of the Taylor Force Act and of its context here.]

According to Shawn Evenhaim, IAC for Action’s chairman, Graham’s office approached the group for help in breaking the gridlock; in response, the lobby pulled together IAC’s two original megadonors — Adelson and billionaire businessman and Democrat Haim Saban — to campaign for the bill. (Saban eventually broke with IAC, reportedly due to sensitivities surrounding the U.S. presidential election, in which Saban supported Hillary Clinton and Adelson backed Donald Trump.)

It’s unclear how effective the campaign was; Graham’s office did not respond to multiple requests for comment, and Noah Pollak, a political consultant considered one of the bill’s primary drivers, told The Jewish Week he was unaware of IAC’s role. Still, in reference to their campaign, Nicolet asserted that “we were critical to getting the bipartisan conversation [on the bill] going. … There is a chasm within the Jewish-American community (regarding Israel). That’s exactly where Israeli-Americans can step in and become a living bridge.”

Eventually, the bill was amended to take into consideration the aid questions that had been raised earlier, and the Taylor Force Act now seems poised for passage next month in the full Senate.

“We have the ability to speak for Israel as Americans, but from an Israeli point of view,” Evenhaim said. “This is something new that we are bringing to the pro-Israel camp, something that has always been missing.”

That unique perspective is IAC’s ace in the hole, particularly when it comes to combating BDS, its officials say. “[The BDS movement’s] biggest success is in dehumanizing Israelis,” Dillon Hosier, IAC for Action’s national director of state and local government affairs, told The Jewish Week. Bringing in Israeli-Americans, fellow state residents who are directly impacted by BDS, “restored the human face to that community. … Adding that Israeli-American element was really what turned the tide.”

California’s recently passed anti-BDS law, AB2844, is a case study in IAC for Action’s efforts. The law prohibits the state from contracting with firms that boycott or comply with boycotting Israeli companies, asserting that that would constitute an act of discrimination against Jews and Californians of Israeli descent and their businesses.

According to the bill’s author, Assemblyman Richard Bloom (D-Santa Monica), the Israeli-American voice was key to its passing. “Dillon and the IAC worked very closely with me and my legislative team to assure passage and the governor’s signature on AB2844 … [rallying] IAC members to email, call and provide other advocacy on behalf of the Israeli-American community,” Bloom told The Jewish Week in an email. “Frankly, and quite logically, many legislators do not understand BDS and why it is such an important issue for Israel and Israel’s supporters. The IAC … was singular in its ability to bridge that gap.”

Reporting from last year’s Israeli-American Council conference, I noted that the Israeli-American Council defied the conventional wisdom that young Jewish adults are not joining Jewish organizations. The more than 1,000 Israeli-Americans at last year’s conference suggested that the in-your face, raw, brash energy of Israelis was being brought into the American Jewish organizational mainstream for the first time. With a mission of better integrating the now more than 500,000 Israeli-Americans into the American Jewish community, the IAC presented itself as a kind of communal “self-help” organization. It focused, for example, on how to keep the children of Israeli-Americans—many of whom are secular—Jewish. With the power and wealth of billionaire Las Vegas mogul Sheldon Adelson solidly behind it, it became clear that the IAC was also trying to act as a human bridge between Israel and American Jews—a kind of “reverse Birthright” mission—strengthening the state of Israel in the process.

But something new was on display this year: the rapidly maturing face of a new grassroots, AIPAC-like, Israeli-American Coalition for Action, an activist IAC political arm that parlays Israeli technological and political savvy into support of pro-Israel politics at the state and local levels. While still addressing the integration of Israeli-Americans into American Jewish life and deepening American Jews’ connection with Israel, this year’s conference, held in Washington, DC on September 24-26, and attended by over 2,000, gave center stage to the Coalition for Action’s step-by-step construction of alliances with local political and religious groups and use of social media to build support for pro-Israel actions—with a particular focus on opposing the growing boycott, divestment and sanctions movement. 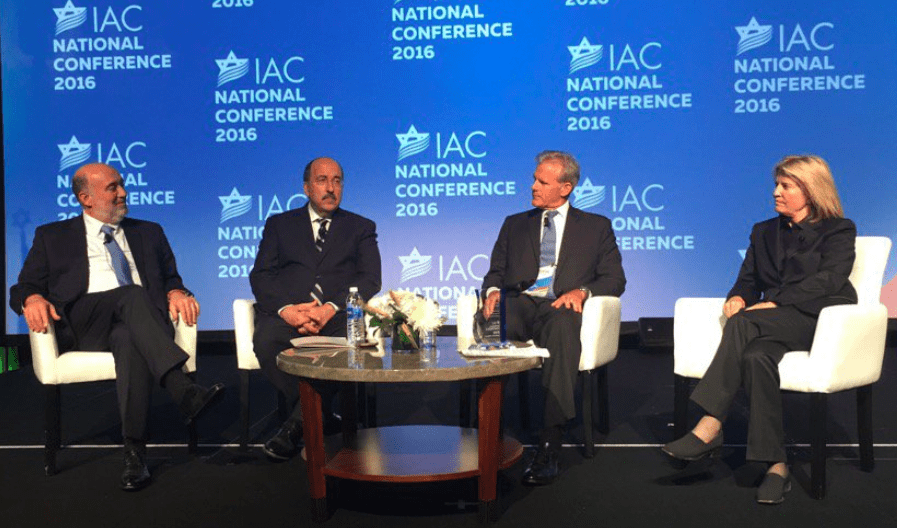 During the past year, there have been numerous reports that Adelson was assembling a task force to mobilize against the BDS movement. The fruits of that mobilization were clearly on display last week. At the opening of the conference, it was announced that California governor Jerry Brown had just signed AB-2844 into law, prohibiting the state of California from doing business with agencies or businesses that participate in BDS activities.

Back story of California’s anti-BDS legislation

However, the backstory of how the IAC was able to make this happen was told not in the plenary, but in two revealing panel discussions on coalition building and innovative use of social media. In one session, attended by the author of the California bill, Santa Monica Assemblyman Richard Bloom, as well as Adelson himself, panelists, including two city mayors, explained how meeting with strategically important legislators, planning Israel trips that highlight the multicultural aspects of Israeli life, supporting the interests of politically important groups, and building “common ground” with, for example, the LGBT community in West Hollywood, could pay off in political allies and support for anti-BDS initiatives.

The second panel focused on methods and messages for countering BDS activism on college campuses, as well as in government and local communities. Here the focus was on the power of social media. One panelist showed an animation showing members of Students for Justice for Palestine disrupting a lecture at the University of Minnesota by pulling the microphone cord. Another, the founder of the startup Phone2Action, showed members of the audience how to text their home state legislators in real time to support anti-BDS legislation just by texting “Israel” and a number on their iPhones.

A separate session, which I did not attend, focused on coalition building with other ethnic groups. Rabbi Marc Schneier, head of the Foundation for Ethnic Understanding, discussed the release of an open letter, signed by 10 prominent American Muslim political and religious leaders, including the two Muslim members of Congress, which calls on Hamas to release the remains of two Israeli soldiers killed in 2014 in Gaza.

The IAC is still a start-up, opening chapters around the country, with a base one-tenth of AIPAC, and this was only its third national conference. But it has money, a strategy and strong leadership that are helping it to punch far beyond its weight. One has the feeling that the Jewish world has yet to digest the potential impact on American Jewish life and American politics of this young and largely unstudied group.

IAC workshop on how to defeat BDS: