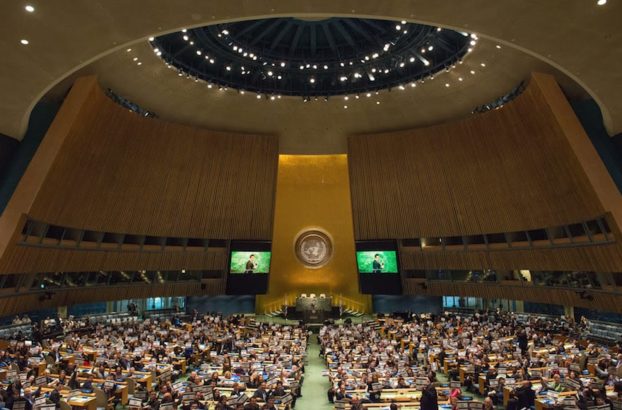 Thousands attend an anti-BDS conference at the UN sponsored by the World Jewish Congress and the Israeli mission to the UN on March 29, 2017.

The following press release was distributed on Nov. 6, 2017 by the American-Israeli Cooperative Enterprise (AICE). AICE is based in Chevy Chase, Maryland, and is the sponsor of the Jewish Virtual Library. The executive director is Mitchell Bard. Bard is often interviewed by news media as an alleged expert on Israel-Palestine (see video here.)

It is press releases such as this that give Americans the false impression that all Jewish Americans support Israel. This is also the reason that some individuals at times refer to the Israel lobby as “the Jewish lobby,” the phrase that is employed in Israel.

Corrections to some of the statements in the release below have been added in brackets. The 93 signatories are listed below the release.

CHEVY CHASE, MARYLAND – As the Jewish community celebrates the 100th anniversary of the issuance of the Balfour Declaration, [go here for info on who was behind the Balfour Declaration] an anti-Semitic [sic] campaign to delegitimize Israel is being pursued by advocates of the boycott, divestment and sanctions (BDS) movement. [See facts on BDS here.] While the international community recognized the right of the Jewish people to reestablish a state in their homeland, Israel, BDS advocates seek to deny the Jewish right to self-determination. [See this for a discussion of Israel’s alleged right to expel the indigenous population.] In response, 93 international Jewish organizations have signed a statement condemning BDS.

Statement of Jewish Organizations on Boycott, Divestment and Sanctions (BDS) Campaigns Against Israel

“This important statement demonstrates the international Jewish community’s objection to the campaign to ostracize, punish, and threaten Israel.,” said AICE’s Executive Director Dr. Mitchell Bard. “It is gratifying to see groups from across the political and religious spectrum come together on this issue and rebut BDS advocates who falsely claim to represent ‘the Jews.'”

The statement notes that “academic, cultural and commercial boycotts, divestments and sanctions of Israel are: counterproductive to the goal of peace; antithetical to freedom of speech and part of a greater effort to undermine the Jewish people’s right to self-determination in their homeland, Israel.” It also condemns the extremist rhetoric of the delegitimization movement.

The signatories acknowledge that criticism of Israel is legitimate, but note that criticism becomes anti-Semitism “when it demonizes Israel or its leaders, denies Israel the right to defend its citizens or seeks to denigrate Israel’s right to exist.”

[This distortion of the meaning of antisemitism on behalf of Israel was initiated by an Israeli minister and has been perpetrated through an international campaign.]

The statement expresses particular concern with the BDS movement on campus because it “is antithetical to principles of academic freedom and discourages freedom of speech,” has provoked “deep divisions among students,” and has “created an atmosphere of intolerance and hatred.”

The statement calls on “students, faculty, administrators and other campus stakeholders to uphold the academic and democratic values of a free and civil discourse that promotes peace and tolerance.”

[In reality, the anti-BDS organizations often work to prevent free speech and to block factual events about Israel-Palestine; see this for example.]

“We all believe in peace,” added Dr. Bard, “and that goal cannot be achieved by demonizing and boycotting Israel.”

[Israel partisans have often pushed for wars; see this.]

Below are the 93 signatories (most appear to be Americans]

Jonathan Arkush
The Board of Deputies of British Jews

Akiva Tendler
The Fellowship for Campus Safety and Integrity

Eran Shayshon
Reut: The Reut Group: From Vision to Reality

Asaf Romirowsky
Scholars for Peace in the Middle East (SPME)

Luke Akehurst
We Believe in Israel

Paul Charney
Zionist Federation of the United Kingdom and Ireland