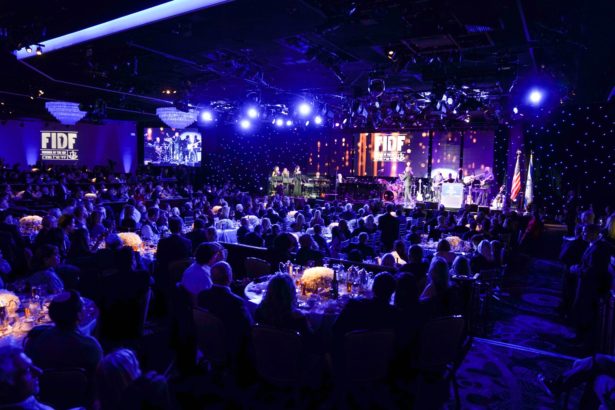 Western Friends of the Israeli Defense Forces gala at the Beverly Hilton, November 2, 2017. The sold-out gala claims to be “one of Los Angeles’ premier charitable events.” It drew 1,200 supporters from across the country. [Update: the 2018 Hollywood gala raised $60 million.]

Friends of the Israeli Defense Forces, which supports Israeli soldiers, hosts fundraising galas all over the U.S. The recent event in Los Angeles, studded with business titans and celebrities, raised over $50 million. As a registered non-profit in the US, contributions are tax deductible, allowing US citizens to write off donations that indirectly support a foreign army.

By Sara Powell and Alison Weir

One would think that one of the world’s most powerful armies wouldn’t need a fundraiser to support its troops, especially since Israel already gets over $10 million per day from the US. Nevertheless, Hollywood mogul and longtime pro-Israel advocate Haim Saban and his wife Cheryl hosted a gala event in Los Angeles on Thursday, Nov. 2, 2017 to do just that. This is just one of such events held across the U.S.

The celebrity-filled event was for Friends of the Israel Defense Forces (FIFD) a U.S. “charity” that even before the fundraiser had assets of over $190 million. Donations to it are tax-deductible in the United States, although it is unclear why donations to benefit a foreign military (and one that regularly raises concerns about war crimes) should reduce one’s financial obligation to the United States. The gala was held despite the IDF’s record of killing civilians, including children.

FIDF National Board Member Haim Saban and his wife, Cheryl, chaired the star-studded gala at the Beverly Hilton Hotel for the 11th straight year. Saban is major donor to the Democratic party and has long been particularly close to the Clintons.

There were also 17 members of the IDF, all born and raised in the US, who later made Aliyah (immigration to Israel, considered a birthright for all Jews), flown over for the event.

According to reports, the largest amounts donated were $16.6 million by Oracle co-founder and CTO Larry Ellison, $6 million by Rabbi Yechiel Eckstein, $5.2 million by GUESS co-founders Paul and Maurice Marciano, and $5 million by host Haim Saban.

FIDF reportedly has more than 150,000 supporters and 20 chapters throughout the United States and Panama.

Barbra Streisand, Larry King, Sylvester Stallone, and Robert de Niro helped raise money at previous FIDF events, according to Variety and Jerusalem Online. Streisand said at a 2014 fundraiser: “This event is always one of the most inspiring and emotional evenings of the year.”

A few months before, Israeli forces had invaded Gaza, killing 2,000 Palestinians, including at least 521 children. More than 10,000 were injured and nearly 500,000 were displaced from their homes. Over 19,000 homes, hospitals, businesses, schools, and places of worship were destroyed or severely damaged.

The Jewish state of Israel was created in 1948 by expelling most of the indigenous population – Christians and Muslims – from Palestinian land, which they then renamed “Israel.”

In 1967 Israeli military forces took still more Palestinian land. During that offensive, Israel attacked and tried to sink a U.S. Navy ship, the USS Liberty. The Israel lobby in the U.S. is so powerful that the culprits were never brought to justice, and the attack was inaccurately claimed to be a “mistake.”

Some of those performing at this year’s Los Angeles gala were Seal, David Foster and Gene Simmons of Kiss.

Update, September 2018: A package to give Israel $38 billion over the next 10 years (approximately $23,000 per Israeli family of four) is currently before Congress. Learn more here. This is the largest such aid package in U.S. history.

Sara Powell is a contributor to If Americans Knew. Alison Weir is executive director and the author of Against Our Better Judgment: The hidden history of how the U.S. was used to create Israel.