You Are Here: Home → Israel’s forced displacement of Bedouins in Naqab desert 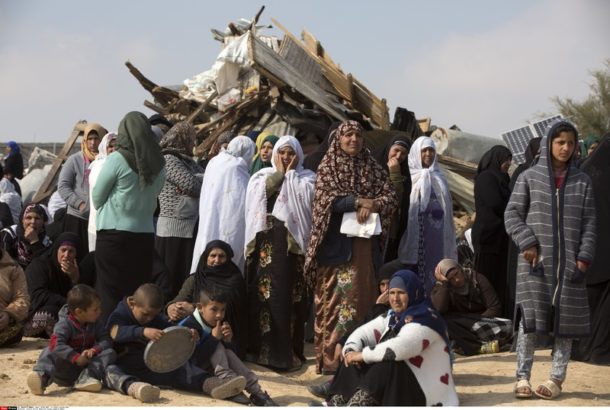 Bedouin women and children in Umm al-Hiran, an unrecognized Palestinian village in the Naqab desert, after an Israeli demolition raid in January 2017. (Heidi LevineSipa Press)

As part of Israel’s plan to develop the southern Naqab desert, Bedouins residing in Naqab desert villages have endured multiple forced displacements since Israel’s establishment in 1948. Israel prevents these communities from developing and denies them essential services like water and electricity.

Israel is moving to forcibly transfer some 36,000 Bedouins into displacement camps as part of a plan to develop the southern Naqab desert, a human rights group warns.

Those facing forced displacement live in villages not recognized by the state.

Adalah, a group that advocates for the rights of Palestinians in Israel, is challenging the planned developments.

One of the projects is a testing facility owned by the weapons manufacturer Elbit Systems that would encompass 27,770 acres, more than twice the area of Tel Aviv.

The second project, the Sde Barir phosphate mine, is opposed by Israel’s health ministry as well as the communities it would displace.

In early October, a regional Israeli government planning committee discussed two plans to house Bedouins from unrecognized villages temporarily. Displacement camps would be used “in cases where the population is urgently required to move from their living sites before permanent buildings are established.”

The language used by the planning authorities suggests that mass displacement may be imminent.

“The Israeli plans would allow authorities to immediately evict and transfer Bedouin citizens to the new displacement camps for a period of three to six years,” according to Adalah.

Bedouins residing in unrecognized villages in the Naqab desert have endured multiple forced displacements since Israel’s establishment in 1948. Israel prevents these communities from developing and denies them essential services like water and electricity.

Thousands of Bedouins have had their citizenship revoked by Israel in recent years.

“It is unreasonable to again coerce displacement to temporary housing tens of thousands of residents who have been living in their villages for decades and, indeed, for generations – most of which are actually located on their traditional tribal lands,” Suhad Bishara, an attorney with Adalah, stated in a letter to Israel’s southern planning and building committee.

Attiya Al-Issam, chair of the Regional Council for the Unrecognized Villages in the Negev, stated that the “malicious plan” is seen by Bedouins as “the embodiment of Israel’s Prawer Plan.”

That plan, discussed by Israel’s parliament in 2013, sought to forcibly transfer tens of thousands of Bedouins in the Naqab into townships.

It was ostensibly frozen after mass protests by the affected communities. But Israel continued to promote plans to concentrate as many as 90,000 Bedouins from 36 villages into a segregated area.

In September last year, the European Parliament adopted a resolution calling on Israel to “put an immediate end to its policy of threats of demolition and actual eviction against the Bedouin communities” living in the Naqab, as well as in the occupied West Bank.

The resolution was passed months after Israel coerced residents of Umm al-Hiran, an unrecognized village in the Naqab, into agreeing to be removed from their homes so that a Jewish-only town could be built in its place.

The move was “reminiscent of the darkest of regimes such as apartheid-era South Africa,” Adalah stated at the time.

Another unrecognized Bedouin village in the Naqab, al-Araqib, has been demolished by Israeli authorities more than 100 times to make way for two forests planted by the Jewish National Fund.

Maureen Clare Murphy is the managing editor of The Electronic Intifada and lives in Chicago.