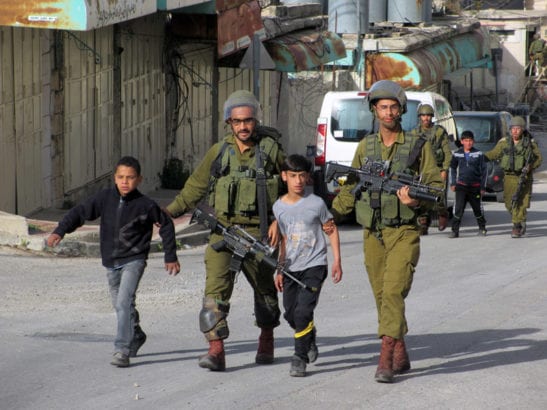 The International Middle East Media Center (IMEMC) posted a brief article on Monday, but it is part of a much larger and very disturbing story.

IMEMC reported that on Sunday night, 4 Palestinian children in a village near Jerusalem were detained and interrogated by Israeli forces. The children were ages 9-10. They endured “several hours” of questioning before being released later that night.

On average, Israel arrests and prosecutes 500-700 Palestinian children ages 12-17 every year; sometimes, as in this case, children even younger are taken. The youths are prosecuted in a military court system that “lacks basic and fundamental guarantees of due process in violation of international standards.”

Since 2000, over 12,000 Palestinian children have experienced detention.

Although a signatory to the UN Convention of the Rights of the Child (CRC), Israel has declared that the Convention “does not apply in the [Palestinian] West Bank.” Israel also defines Palestinian children as under 16, while Israeli children are defined as under 18. CRC sets the age as under 18.

Usually when detaining Palestinian children, Israeli soldiers allege stone-throwing, which can result in a prison sentence up to 20 years.

According to Saed Bannoura of IMEMC, in most cases children are taken into detention without a parent or legal representation. The use of torture and threats are common (watch this video for a recent, firsthand story).

Bannoura grew up in the West Bank. He recounts that as a child, he was “beaten up by the soldiers many times” for no reason. Some beatings were severe enough to cause internal bleeding and hospitalization. He describes once being detained for a week, and then released with no explanation whatsoever.

When at the age of 18, he attended  a peaceful protest, an Israeli “death squad” shot him multiple times; one bullet lodged in his spine and paralyzed him permanently from the waist down.

Bannoura believes that the Israeli army prioritizes “control and dominance” over Palestinians, and in the courts Palestinians are “presumed guilty until they are proven guilty” – adding “that’s not a typo.”