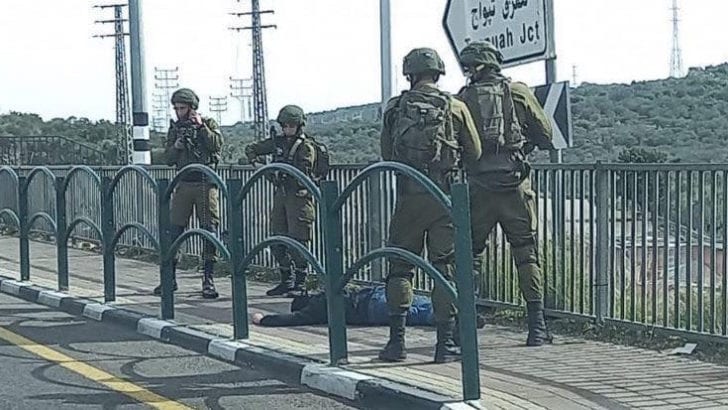 Israeli occupation forces have just killed another Palestinian youth. The heavily armed Israeli combat soldiers say the boy tried to attack them with a knife (not independently confirmed).

According to Israeli and Palestinian news reports, Israeli soldiers shot and beat 17-year old Atallah Muhammad Harb Rayan Tuesday afternoon in the northern occupied West Bank. He was not given first aid or medical assistance and bled to death.

No Israeli soldiers were wounded during the incident. The soldiers were stationed at a military post on Palestinian land near the illegal Israeli settlement of Ariel in the northern West Bank.

The soldiers claim the youth had attempted to stab them, but this has not been independently confirmed.

In some cases, subsequent evidence has shown such claims to be highly questionable (also see this, this, and this). In other cases, attacks appear to have been “suicide by police,” as desperate individuals attack heavily armed Israeli occupation troops.

Rayan was a high school student from Qarawat Bani Hassan, an ancient town of a few thousand southwest of the occupied West Bank city of Nablus.

When townspeople protested, soldiers then fired gas bombs, concussion grenades, and rubber-coated steel bullets at the protesters, causing many to suffer from teargas inhalation.

Israel has occasionally cut off the town’s water, Israeli settlers have attacked farmers, Israeli soldiers have periodically invaded it and beat residents, and last April the Israeli government ordered the demolition of 22 village properties.

“We were really surprised to get these orders during this time. We are in the midst of a global pandemic. Everywhere in the world, including in Palestine, people are scared for their health and their lives, but Israel is only concerned about destroying Palestinian homes.”

The Mayor pointed out:

“The international community needs to look and see what’s happening in Palestine. We are supposed to stay at home to be safe from the virus, but soon, we won’t have any homes to go to.”

Such home demolitions in the town have been going on for many years.

It is not known if the teen is related to Rayyan (transliterations of Palestinian names often vary), whether he and/or his family members had been attacked by Israeli settlers and/or soldiers, or whether his home is one of those targeted for demolition.

Descriptions of the incident differ.

“[two soldiers in the West Bank] noticed a man passing them by on foot and behaving suspiciously. The man drew a knife from a short distance and tried to stab the female soldier three times as she fought him off with her weapon.

The commander at the scene drew back, aimed his weapon toward the assailant, and searched for an angle that would not jeopardize his comrade — a lone soldier who immigrated from England, according to N12.

The commander successfully shot the man, bringing the incident to an end. The assailed soldier was only slightly wounded.

(The female soldier in the incident has been identified as a British citizen who traveled to Israel to serve in the army.)

“At around 11:30 a young Palestinian man was crossing the roadblock, soldiers attacked and shot him, they hit him, he scuffled with soldiers after they fired at him, they forced him on the ground, then they hit him on his head with their guns, most likely this is what killed the young man, because they struck him on the head multiple times, they busted his head open, they shot and injured him first, then beat him to the ground and assaulted him and hit him on his head, this is what killed him.”

The human rights group Defense for Children International–Palestine (DCIP) reports that Rayan is the first Palestinian minor killed by Israeli forces in 2021. In 2020, Israeli forces killed at least 8 Palestinian youths in the Occupied Territories.

“Israeli forces frequently resort to lethal force in circumstances not justified by international law. Children suspected of committing criminal acts should be apprehended in accordance with international law and afforded due process of law.”

DCIP goes on to report: “Israeli forces are rarely held accountable for grave violations against Palestinian children, including unlawful killings and excessive use of force.

“According to Yesh Din, an Israeli human rights organization, around 80 percent of complaints filed with Israeli authorities by Palestinians for alleged violations and harm by Israeli soldiers between 2017 and 2018 were closed with no criminal investigation opened.

“Of complaints where a criminal investigation was opened, only three incidents (3.2 percent) resulted in indictments. Overall, the chances that a complaint leads to an indictment of an Israeli soldier for violence, including killing, or other harm is 0.7 percent, according to Yesh Din.”