You Are Here: Home → A Palestinian photographs a trespassing Israeli settler, gets his skull fractured

A Palestinian photographs a trespassing Israeli settler, gets his skull fractured 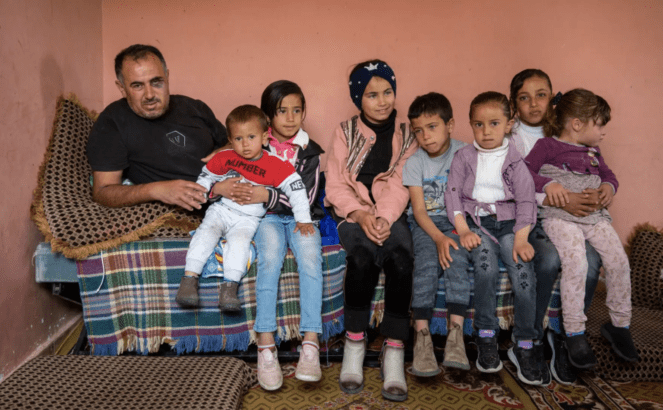 March 2021: The Awwad family, some of whose members fell victim to violence at the hands of settlers from a nearby illegal outpost on Saturday.

Settler violence in the Palestinian West Bank: Said Awwad has filed three trespassing complaints this year, but the police asked him to ‘bring proof.’ When he tried to take a picture of men intruding on his land – settlers he knew by name from the nearby outpost – they attacked him, his wife and their children ages 1 to 15.

One of the assailants wielded an ron bar and struck Rima in her back. Then he struck Said in the head. The rest made do with throwing stones, even at an SUV full of shouting and crying children – the youngest an 18-month-old boy, the oldest a 10-year-old girl. The assailants were about eight or 10 young men; some had their faces covered.

It’s hard to imagine that Rima Awwad, who on Tuesday hosted many people who had come to learn how the family was doing, is the same person who for four minutes managed to film some of the assault Saturday – jumpy film, taken while running and fleeing, amid shouts, worry and fear.

Said Awwad, nearly 50, suffered five head fractures: three in the jaw, one on his left temple and the other in his eye socket. Under his eye is a shiner. All this came from two sharp kicks by a young Jewish man who came down with his friends from the Mitzpeh Yair outpost.

“I thought they would kill me”

Said is in great pain. He can’t open his mouth. Wires inside his mouth hold his jaw together; he can hardly hold the straw for the medicine in the right side of his mouth. It hurts to draw in the food like that too.

With great effort, he gets the words out: “I thought that this time they would kill me, but I wasn’t afraid. You think that you have to face them, and what will be will be. I’m standing outside the SUV and I hear the children shouting from inside. That gives me strength. If I had run away, they would have hurt the children.”

Rima Awwad, 38, has a black-and-blue mark where she was struck. Now it kind of tickles, she said. “When I was a little girl I helped the adults harvest the wheat and barley, on this same soil. By hand. Later with a scythe.”

Rima and Said are members of the same extended family, from the village of Umm Lasafa, east of Yatta in the southern West Bank. The extended family has 268 dunams (66 acres) of land about 10 kilometers (6 miles) south of there, in an area called Umm al-Arayis. “I was born in a cave in this area, Qawawis. The al-Najar family uses it to this day,” Said said.

In the heart of their land and the land of the Abu Aram and Jabarin families, on a hill that Israel’s Civil Administration has declared “state land,” in 1997 an unauthorized and illegal outpost was built, which is now being retroactively legalized by the government and is trying to grab more Palestinian land. Every Saturday Said and his family – his children, brothers, their children and a few first grandchildren – come to spend a few hours on their land. In addition to planting, sowing and harvesting, and besides the legal battle against the intruders, that’s their way of saying they won’t give up their land.

“Every once and a while I complain to the [Israeli] police that shepherds from this outpost send their sheep onto our fields to eat the barley and wheat we grow,” Sa’id said Tuesday. “This year I’ve filed three complaints already. Four months ago I planted olive saplings. About a month ago, sheep ate the leaves. The police always say ‘bring proof.’

While the children watched

“On Saturday we came to our land at around 8:30 in the morning. The first thing I saw was [a settler] with his flock on my land. I asked my wife to take a picture of him and told him: ‘Every time I file a complaint they tell me nobody was there. Today I’ve caught you red-handed.’ [The settler] made a call on his phone, right in front of me, and told people, ‘Said filmed me. Come over. Break his phone.’

“I understand Hebrew very well. I’ve been working in Israel for 30 years. I called the police headquarters in Kiryat Arba [near Hebron]. They told me: ‘Move away and don’t fight with them. We’re sending a patrol car.” I also called Nasser Nawaj’ah from B’Tselem and I put the phone in my pocket.

“I then saw young men coming down toward us from the outpost. Our older children were in the field (my brother had brought them in his car and left). The smaller ones were still in my big SUV and I told them not to get out.

“The young men who came down from the outpost started throwing stones at the SUV. I took a stick from it to fight them off. I told my wife to move away a little and film. The attackers scattered in the area. But everything happened near the SUV. I don’t remember exactly when. But I protected my face with my hands and a stone hit my hand. My hand didn’t break, but it’s swollen and it hurts.

“I heard the phone ring a few times, but I couldn’t answer. After that I realized it was the police. A stone hit my pocket and broke the phone screen. I heard my wife shout ‘they’re beating me.’ I ran toward her. The guy with the iron rod who hit her – I know him. The week before, when we were in the field, he threatened us. I got closer and he hit me in the head. I fell. I tried to get up and he hit me again in the head with the iron rod. I wasn’t holding the stick anymore. I don’t remember how and why I lost it. I fell again.”

Said is sure that what saved him and his wife from more blows were their 12-year-old and 15-year-old sons, who quickly stood between the assailants and their parents.

Rima ran toward Said when he fell. “When I started to film, I didn’t expect that this would happen,” she said. “They tried to take the phone away, then the guy hit me.”

Meanwhile, the smaller children continued to scream from inside the SUV. Asil, age 10, held Alian, age 18 months. Batul hid under the seat. A stone thrown by the assailants struck the SUV full of children and broke a window. After that the older girls picked the glass shards out of the hair of the little ones.

Said, lying on the ground, felt dizzy and lost consciousness a few times. When he came to, he was groggy. At some point the assailants went back to the outpost. The older children saw soldiers standing next to a house in the outpost. They ran to them to say that their father was bleeding and had fainted.

Residents of nearby villages and activists from the Ta’ayush rights group who were in the area and knew about the assault from Nawaj’ah hurried to the scene. On their way they were stopped at a roadblock put up by the army, and when they finally arrived, the army and a man who said he was the security officer for the Mitzpeh Yair outpost were already there. It was 9 A.M.

The first to spot Said were soldiers. “They asked me who attacked me,” he said. “I was groggy. They laid me on the ground. I couldn’t spit and my throat filled with blood. They took me [on a stretcher] to the army vehicle where there was a doctor. He checked my blood pressure and said immediately I had fractures.” The police also arrived.

The Israel Defense Forces’ Spokesperson’s Unit told Haaretz: “On the date in question there was a soldier on protective duty in the community. When the soldier saw what was happening, he reported it to the relevant bodies. A military force that received the report came to the site within a few minutes, after the incident was over. A Palestinian resident who was injured received first aid at the scene by an army doctor. Soldiers are directed to maintain law and order in the area and prevent lawbreaking, without reference to the identity of the offender.”

Said knows the first name of the young shepherd who was in his field with the sheep, and he knows that the shepherd and his brother moved with their father to Mitzpeh Yair from another outpost north of Ramallah. He also mentioned the name of another shepherd, who used to live at Mitzpeh Yair and also sent his sheep onto the Awwad family’s sown fields. Said knows the full name of the outpost resident next to whose house the assailants stood after the attack. These are details that are coming to light with time.

In addition to pain and the knowledge that in about six weeks the wiring will be removed from his mouth, the loss of money is a burden on Said. He had to pay 10 percent of the cost of his surgery (1,800 shekels [$546] out of 18,000 shekels), which he underwent at a private hospital in Hebron. The medications come at his own expense. Fixing the SUV will cost money, and so will fixing his cellphone screen. Above all, he can’t go back to his job in Israel for a few weeks and he’ll lose his income for that stretch.

On Tuesday morning, Hussam, the officer in charge of infrastructure at the Civil Administration, called Said. “He encouraged me to file a complaint with the Israeli police and assured me that all the commanders are against what happened,” Said says, adding that he has no idea whether the police will treat his complaint seriously and try to deter other potential assailants. He does know that this Saturday many of his family and friends will be heading out for a morning picnic, on their land.