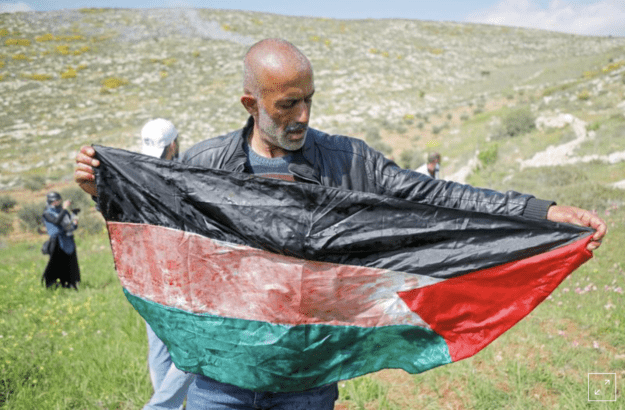 After an Israeli soldier fatally shot a Palestinian today, a man from the village holds a Palestinian flag stained with his blood.

Israeli troops shot a Palestinian peaceful protester in the head in the occupied West Bank on Friday (video below).

According to news reports, Israeli forces shot and killed a 42 year-old Palestinian man during a peaceful protest in the village of Beit Dajan in the northern West Bank.

The man, Atef Yussef Hanaysheh, was reportedly shot in the head while he was among a group demonstrating against an unauthorized Israeli settler outpost nearby that had been built on village land. The settlement is illegal under both Israeli and international law.

Hanaysheh was said to be an imam (congregation minister) at a local mosque.

An organizer says that the demonstration had been nonviolent as the protesters marched peacefully toward a settlement outpost. Israeli soldiers, he said, had opened fire without warning from about 50 meters (160 feet) away. A Reuters photographer who witnessed the shooting said that some Palestinians had thrown stones at the soldiers before the shooting. Israeli soldiers generally dress in full armor for protests.

Palestinians who participate in the weekly protests in Beit Dajan are used to tear gas canisters and smoke grenades, but this time Israeli forces had used live fire.

The Israeli military claimed that “dozens of Palestinian rioters hurled rocks” at troops, who then “responded with riot dispersal means and by firing into the air.”

The statement added, “We are aware of reports regarding a Palestinian casualty. The cause of the injury is still unknown. The incident is being examined.”

Palestinians gather on Fridays throughout the West Bank to protest the expansion of Israeli settlements, which are deemed illegal under international law.

Israel captured the West Bank in an offensive war in 1967 and has occupied it ever since.

Israel has confiscated huge swaths of Palestinian land in both the West Bank and East Jerusalem, built settlements, and transferred hundreds of thousands of Israelis to live there.

Palestinians point out that the settlements, which dominate over 40 percent of the West Bank, make it impossible for them to have a viable state in the future.

Israel claims the settlements – and other measures, including checkpoints and a separation wall – are necessary for “security,” and maintains that biblical and historical ties entitle Jews to the land, although most religious Jews originally felt the establishment of Israel through force was heretical, and some still do.

Mondoweiss reports that Hanaysheh is the third West Bank Palestinian to be killed by Israeli forces in 2021; hundreds more have been injured.

Below is a video of the incident posted on Twitter by the Palestinian news organization Shehab News Agency. The Arabic script says: “This is the moment when Atef Hanaysheh, the prayer caller for the Mousa bin Naseer mosque, was shot in the head by the occupying forces in Beit Dajan, east of Nablus.”