You Are Here: Home → “Unprecedented escalation” in Israeli settler attacks against Palestinians 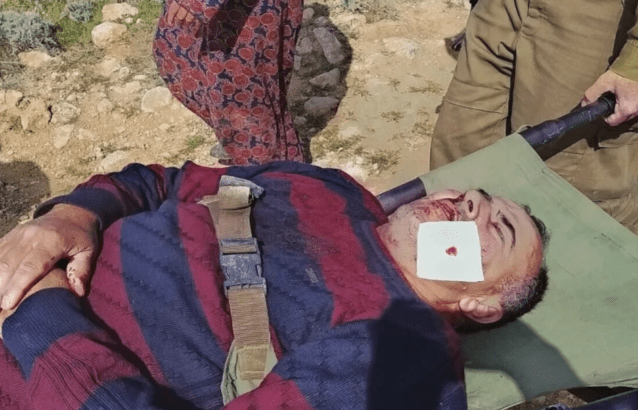 Saeed Awad was attacked by ten Israeli settlers as his children watched from inside their car. His wife was also beaten.

The unprecedented number and intensity of Israeli settler attacks – often with the complicity of the Israeli military – during the past few months are raising fears that the situation may escalate out of control.

Palestinian Saeed Alyan Awad was on the way to his land with his wife when 10 Israeli settlers attacked them near the illegal Mitzpe Yair settlement.

The Awads’ land lies east of the town of Yatta, south of Hebron, and the family goes there every Saturday in an effort to prevent the Israelis from expanding their outpost onto their property.

One of the attackers, wielding an iron pipe, cracked Saeed’s skull and broke his jaw on March 10, while his wife suffered severe bruises on her leg. With Awad’s children and nephews screaming in horror inside their vehicle, the settlers then moved towards them and smashed the windscreen and pelted it with rocks.

“The assault on my family and me lasted about seven minutes,” Awad, 49, told Al Jazeera. “My face was bleeding and I lost consciousness for a few minutes. I underwent an operation to re-attach my left jaw and heal the wounds on my face.”

Young Palestinian men in the area heard the screams and saw the attacking settlers and came to the rescue. The Israelis backed away from the scene and soldiers from the Israeli military arrived, providing first aid for Awad. The troops watched, however, as the settlers departed without detaining them.

“The army should have arrested the settlers but it did not, even though it was certain they attacked and tried to kill me,” Awad said.

Though he filed a complaint at the Israeli police station at the Kiryat Arba’a settlement on Wednesday, he said he does not expect any justice.

It was the latest in a series of increasing attacks on Palestinians by gangs of roaming Israeli settlers in the occupied West Bank.

The group accused Israeli security forces of failing do stop the attacks and said Israeli police routinely close criminal complaints filed by the victims without anyone being charged.

The violent escalation against Palestinians appears to have been sparked after the death of Ahuvia Sandak, 16, from the Bayt Hayen settlement in the southern West Bank. He died when the car he was riding in with four other Israelis overturned while fleeing Israeli police east of Ramallah. The settlers were being pursued after undercover officers saw them throwing rocks at Palestinian vehicles on December 21.

According to Israeli media, Sandak belonged to a settler group known as the “Hilltop Youths”, which is accused of attacking Palestinians and their property.

He said the settlers have also forced the closure of main roads in the West Bank cities of Nablus, Tulkarm, and Jenin.

Israeli settler violence includes “physical assaults against Palestinian shepherds and farmers while working on their lands, attacking Palestinian houses during the night and assaults on them, and the scattering of iron nails on the streets to damage Palestinian vehicles”, said Daghlas.

Izz al-Din, 44, from the village of Majdal Bani Fadel south of Nablus, said he and his father were beaten as they went to work on their farm last month.

“As we arrived and left our vehicle, two settlers who were hiding among the parked vehicles beat us with wooden batons on our heads, arms, and legs. We started screaming until a group of people from our town… rushed to us and saved us from the hands of the settlers,” al-Din told Al Jazeera.

“The Israeli police who were close to the scene of the incident did not arrest the settlers, despite seeing the signs of their assault on us and our bleeding. They led them (the attackers) to their pick-up vehicle and asked them to leave, while we went in an ambulance to receive medical treatment. If we were the assailants, we would be imprisoned now. But being settlers, they are free.”

The Israeli military told Al Jazeera that its authority is limited to separating the two sides when clashes occur, saying it has no power to arrest, detain or investigate settlers occupying the West Bank, which is the responsibility of Israeli police.

Munir Kadus, a researcher with the Israeli human rights organization Yesh Din, described the recent settler attacks as an “unprecedented escalation of violence against Palestinians across all of the West Bank”.

Between 2005-2019 the group recorded 1,293 acts of settler violence against Palestinians with just 8 percent of investigations into those incidents leading to criminal charges.

An official from one of the councils governing Israeli settlements in the occupied West Bank said the violence was not only being perpetrated by Israelis.

“[We] oppose any manifestation of violence against any person and we demand that those [Israeli] left-wing organisations act against and condemn the stone and Molotov cocktail throwing by Palestinians against Israeli vehicles and civilians,” he told Al Jazeera on condition of anonymity.