You Are Here: Home → During pandemic, Israel demolition of Palestinian homes is up – way up

During pandemic, Israel demolition of Palestinian homes is up – way up 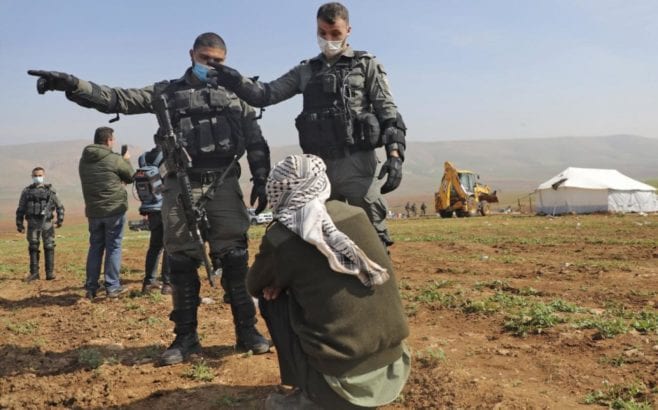 Home demolition is on the rise: Israeli soldiers at a demolition site in the Humsa area of the occupied West Bank on 8 February

The monthly average of Palestinian structures targeted by Israel for demolition has increased by 65 percent this year compared to 2020.

Israeli forces demolished or seized a total of 153 Palestinian-owned structures across the occupied West Bank, including East Jerusalem, in February, marking the fourth-highest monthly total documented by the UN since it began recording such figures in 2009.

The UN Office for the Coordination of Humanitarian Affairs in the Palestinian Territories (OCHA) said in a report released on Tuesday that Israel’s actions resulted in the displacement of 305 Palestinians, including 172 children. At least 435 people also had their livelihoods or access to services affected.

In general, Israel defends home demolitions by saying that the buildings were constructed illegally and without required permits and approvals. But Palestinians and rights groups, including the UN, have documented that such permits are nearly impossible to obtain from the occupying state.

Nearly 90 percent of all structures that were targeted in February were seized in Area C without prior warning, OCHA said. Around 60 percent of the occupied West Bank is considered Area C, where Israel retains full control, including over planning and construction.

Unlike demolitions, Israeli authorities are not required to offer prior notice when carrying out seizures of property, which prevents those affected from being able to object to orders in advance. The exemption has been characterised by the Israeli civil administration as “a strategic tool“, the report said.

Israeli authorities have drastically increased the destruction or seizure of structures donated by humanitarian organisations this year, targeting a total of 93 in 2021 compared to 157 structures in all of 2020.

It was also documented that Israeli settlers damaged or stole nearly $3,000 worth of donor-funded aid last month.

The report provided details of specific demolitions and seizures, including those in the northern West Bank’s Jordan Valley, including an ongoing destruction campaign launched by Israel against the village of Humsa al-Bqaia. The campaign is putting the homes and livelihoods of nearly 100 Palestinians at risk, the report said.

Israel targeted Humsa al-Bqaia at least five times in the month of February, according to OCHA. In that village alone, Israeli authorities confiscated or demolished 82 mostly donated structures worth more than $51,000.

Earlier this month, UN human rights experts called on Israel to immediately end its efforts to demolish Humsa al-Bqaia, warning that the ongoing campaign “has been causing great hardship” for the local community.

Israel has justified its attempt to destroy the village on the grounds that it allegedly lies within an Israeli military firing zone – an explanation often used by the occupying power to dismantle rural Palestinian communities.

“These justifications by Israel do not satisfy its strict obligations under international law,” the UN experts warned at the time. “An occupying power cannot use the territory under occupation to conduct military training operations without ample justification. We note that Israel has plentiful grounds for military training within its own borders.”

The Bedouin and herding communities like Humsa al-Bqaia are being targeted at nearly double the rate of last year, OCHA noted on Tuesday.

“These communities are some of the most vulnerable in the West Bank, with limited access to education and health services, and to water, sanitation, and electricity infrastructure,” the report said.