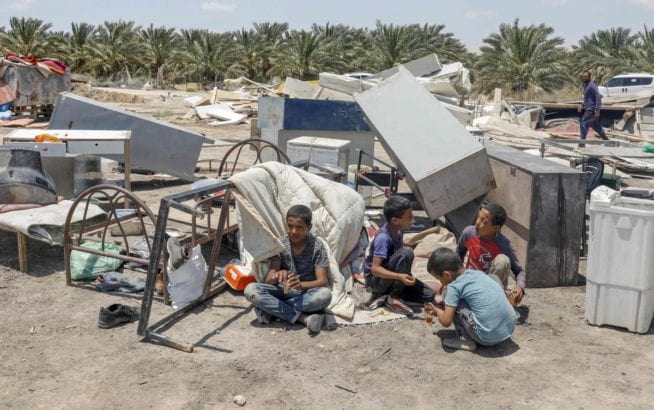 Bedouin boys sit near the rubble of a tent in the Deir Hajle Bedouin community, east of the Palestinian city of Jericho, June 3, 2020.

Houses in the Jericho and Hebron areas were destroyed, rendering 25 children homeless, despite Israeli promises not to demolish inhabited dwellings during the coronavirus outbreak. A father says: “Imagine what it’s like when a little boy is asleep and the army suddenly barges in…”

by Hagar Shezaf, reposted from Ha’aretz

The Israeli military on Wednesday tore down the homes of 65 Palestinians in the West Bank, marking the largest number of housing demolitions in one day since the coronavirus crisis began.

Israel’s Civil Administration, the branch of the military with authority over civilian matters in the West Bank, said in early April it would stop confiscating or demolishing inhabited structures deemed illegal until the end of the crisis.

Abu Dahuk said he and his young children were asleep when the army and the Civil Administration came to destroy the houses. “Imagine what it’s like when a little boy is asleep and the army suddenly barges in. My little boy immediately panicked and asked what they were doing here. This is not a normal life for young children.”

In the Jericho area, Israeli forces demolished a building that housed seven families. Ibrahim Abu Dahuk, a father of seven whose home was destroyed, told Haaretz that they moved to the building three months ago, after the Civil Administration evicted them from their previous residence.

The Civil Administration also destroyed six houses in the Khirbet al-Markaz area in the south Hebron Hills, in which 35 people lived, among them 25 children. The administration also tore down a tent housing two people in the Al-Mufqara area, south of Hebron. Nadal Abu Yunis of the Khirbet al-Majaz local authority told Haaretz that some of the evicted residents slept in caves on Wednesday night, and others in tents provided by locals.

Human rights organization B’Tselem, which monitors Israeli actions in the Palestinian territories, reports that during May, no residential building was demolished in the West Bank, except for a punitive demolition in the village of Kobar.

Meanwhile, the Palestinian Authority extended its state of emergency over the outbreak Wednesday.

The office of the Coordinator of Government Activities in the Territories, the defense ministry unit which oversees the Civil Administration, said in response: “On Wednesday, the Civilian Control Unit conducted enforcement action against three buildings and three tents set up in Area 918 around Hebron. In addition, enforcement activity was carried out against a mobile home in Deir Hajla in the Jericho area. All buildings were erected without the necessary permits and documentation.”

“We emphasize that enforcement has been carried out in accordance with the authority and procedures, and subject to operational considerations,” added the statement.