You Are Here: Home → Mother of Slain Palestinian: “My Son Was A Child In A Man’s Body”

Mother of Slain Palestinian: “My Son Was A Child In A Man’s Body” 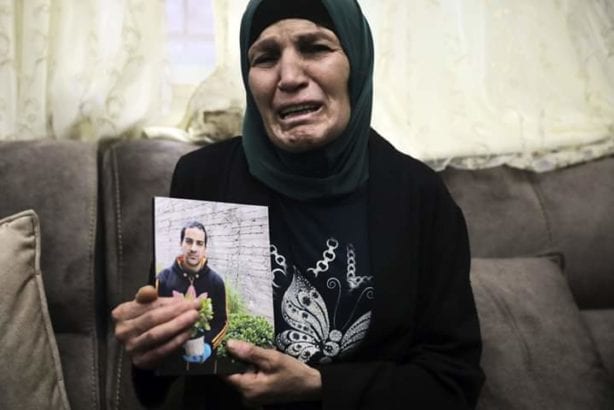 “I have no son other than him, what was his fault to be killed in cold blood?”, said the bereaved mother of Iyad al-Hallaq, a mentally disabled man who was shot dead by Israeli troops in occupied Jerusalem Saturday.

The mother of the Palestinian who was shot and killed by Israeli soldiers in occupied Jerusalem, said that the Israeli allegations and justifications for his brutal murder are mere lies, as the slain man was autistic, and was a child in a man’s body.

The Palestinian, Eyad al-Hallaq, 32, was killed when the soldiers shot him with eight live rounds at the stairs of the Al-Aqsa Mosque, in occupied Jerusalem, while he was walking to the al-Bakriyyah School for persons with special needs.

Eyewitnesses said Eyad was just walking when the soldiers started shouting at him, and he got scared by their loud voices and tried to run away.

They added that the soldiers could have easily arrested him, without resorting to the lethal and excessive use of live fire.

The mother was walking aimlessly around her home in Wadi al-Jouz in Jerusalem, looking lost, and unable to grasp the news about the death of her only son.

Minutes after the news about his death started spreading, she was informed that he was alive and was only shot in his leg near Bas al-Asbat in Jerusalem, but shortly afterwards it became clear that he was killed by the soldiers.

His father, Khairi al-Hallaq, shocked and in disbelief, was sitting in his home, surrounded by several young men who knew the slain Palestinian and rushed to his home, could not utter many words, except prayers and mumblings that only echoed “he was killed in cold blood, he was murdered…”

His slain autistic son, he said, may have looked like a grown man, but his brain was that of a child, who didn’t interact with anybody, and who only left home to go to the special needs school.

“Why would they kill him in cold blood like this,” he said, “They claim that they thought he carried a weapon! Why didn’t they search him, why did they have to kill him without even making sure he was carrying the claimed weapon”.

He added that his slain son started going to the special needs school around six years ago, and that he goes there every day from the morning until evening, and when he returns home, he just sits alone in his room.

His weeping mother, distraught and unable to catch a normal breath, said, “Why didn’t they just capture him… why not search him… why did they have to rush to fatal shots, to killing him in a cold-blooded manner like this.”

“He was murdered in cold-blood, he carried nothing but his mobile phone and his wallet”, she added, “He carried no weapons, he wanted to go to school because he felt bored at home, but at school he could be more active, and interact with others….”.

Attorney Eyad al-Qadamani, who is representing the family, said that the Israeli police is investigating the fatal shooting, and so far, the police is not admitting he was killed by mistake, and are unwilling to transfer his corpse back to his family for burial.

The lawyer added that the Israeli police imposed a gag order, forbidding the release of the names of the officers involved in his death, or even any information about the units they belong to.

The imposed gag order will remain in effect until June 3rd and could possibly be extended for a longer period.

Israeli media outlets said the slain young man did not carry any weapon, and that he was shot just because “he failed to stop when was ordered to.”

The police claimed that they noticed he carried a “suspicious object”, and that they though it was a gun, and added that he was ordered to stop, but he started running and a chase ensued.

Israeli daily newspaper Ha’aretz said the Palestinian was unarmed, and that the officer who shot him said “he suspected al-Hallaq was a terrorist because he was wearing gloves.”

Haaretz quoted a statement by the Israeli police claiming that “two officers noticed the Palestinian carrying a suspicious object that they thought was a gun and ordered him to stop. After the man refused and started fleeing the scene, the officers started chasing him on foot and opened fire, ultimately killing him while he was trying to hide behind a dumpster.”

It added that the police then closed on the Old City, and that the Police Internal Investigations Department will be investigating the incident.

Haaretz also said that the two officers who were involved in chasing him and then the fatal shots, were questioned by the police, before one of them was released “under restrictive conditions”, and the second officer was placed under “house arrest.”

The Israeli media agency also quoted source which was described to be “familiar with the investigation”, the junior officer, who was a recruit armed with M16 automatic rifle, is being suspected of “continuing to shoot despite being ordered by his commander to stop.”

Haaretz added that the officer “continued to shoot because he saw al-Hallaq was still moving”, and that a court in Jerusalem issued a gag order preventing the release of the names of the officers involved in the fatal incident.

[For a Timeline of Palestinians and Israelis killed since 2000 go here.]