You Are Here: Home → Israel May Block Coronavirus Respirators, Aid, to Gaza 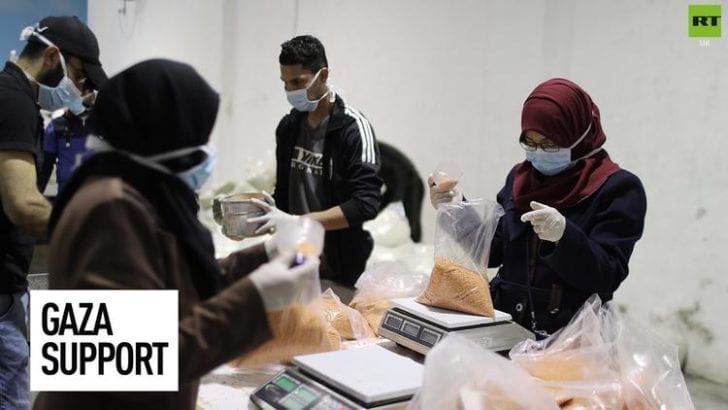 In response to a humanitarian appeal launched by the Palestinian Ministry of Health in Gaza to obtain $23 million in urgent aid, in addition to medicine and medical equipment including 250 respirators in order to deal with the coronavirus in the besieged enclave, Israeli Defence Minister Naftali Bennett threatened that humanitarian aid might not be allowed into Gaza, until the release of Israeli soldiers, or their remains, captured by the Palestinian resistance movement Hamas.

“There is talk of the humanitarian world in Gaza – Israel also has humanitarian needs, which are mainly the recovery of the fallen,” Bennett disclosed. “I think that we need to enter a broad dialogue about Gaza’s and our humanitarian needs. It would not be right to disconnect these things… and certainly, our hearts would be open to many things,” he added.

Linking the issue of the Israeli soldiers, or remains of soldiers, to the issue of the urgent humanitarian needs for the Gaza Strip related to the fight against the coronavirus, is nothing short of deceptive. It is nothing more than an attempt by Bennett to paint a glowing image of himself and his country, and convey that they are concerned with humanity, while the Gazan rulers are portrayed as savages due to withholding two, or the remains of two, Israelis in Gaza.

The two Israeli soldiers were captured or killed while they were in their tanks bombing Palestinian homes and killing civilians in 2014, when the 51-day Israeli offensive killed more than 2,260 Palestinians, including more than 400 children and nearly the same number of women, wounding more than 11,000 others.

If two Israeli soldiers are being held by the Palestinians and the Israeli defence minister wanted them to be released on a humanitarian grounds, why did not he release 5,000 Palestinian prisoners living in dire conditions in Israeli jails, including 43 women and girls, 250 boys and over 1,000 patients, with at least 250 suffering from serious conditions?

Several rights groups have warned that the Palestinian prisoners inside Israeli jails are vulnerable to contracting coronavirus, given the overcrowded prisons and bad ventilation, with a severe lack of hygiene. On Thursday, the Israeli Prison Service let out six Palestinian prisoners from Ofer Prison. They must have contracted the coronavirus because a prisoner from the same prison had been recently released and tested positive for the virus. Rights groups have reiterated several times that Israel is imposing a media blackout regarding the news about the coronavirus among prisoners, in order not to underscore their humanitarian crimes.

Meanwhile, if the Israeli defence minister wanted the release of the Israeli soldiers captured in Gaza on humanitarian grounds, why did he not lift his country’s strict and illegal siege imposed on the Gaza Strip in 2007? Why did he not look at the number of Palestinians who died due to the lack of medical equipment, proper healthcare and medicine as a result of his country’s siege? Why did he not look at the thousands of Palestinians who are still displaced because they could not rebuild their homes which were destroyed by his army in 2014? Why did he not consider the hundreds of children, mothers and fathers who have been waiting to be reunited with their loved ones who have been imprisoned by his country?

Despite all of this, the Israeli defence minister must know that the Palestinians in the Gaza Strip put all their hostilities with the Israeli occupation aside and provided Israel with millions of medical face masks, while it faces an increasing outbreak of the coronavirus.

Hassan Shehata, owner of a sewing factory in Gaza, told AFP that the Israeli companies sent materials to him, and his factory is to make millions of medical masks for Israel. The owner of another factory in Gaza revealed that he has already signed contracts with Israeli business partners to provide one million masks and 50,000 protective suits by the end of April.

Mr. Bennett, we do not want people like you, with the blood of innocent people on their hands, to teach us, the Palestinians, lessons about humanity and morals. Please, do not paint an innocent image of you and your unscrupulous country at the expense of our suffering inflicted by you and your violent state. Enough of your merchandising of humanity on the world, while you remain inhumane.

Motasem A Dalloul is a journalist based in Gaza and a specialist on Middle East affairs. He holds an MA in international journalism from the University of Westminster in London.

We have updated this report, reposted from Informed Comment, with information from Reuters and MEMO.

WATCH: Israel’s blockade of Gaza during the coronavirus pandemic

Corona in the Gaza Strip – Only 70 ICU Beds Available