You Are Here: Home → Israeli forces shoot dead two Palestinians in past 24 hours, one disabled 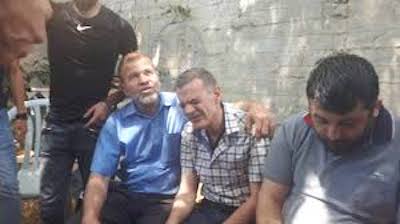 The father of Eyad Hallak, killed by Israeli soldiers.

Palestinian and Israeli media report that Israeli forces have shot dead two Palestinians in the past 24 hours, one of them disabled, and wounded others. (For a timeline of Palestinians and Israelis killed go here.)

The Israeli occupation forces killed two Palestinian youths in less than twenty-four hours in Jerusalem and Ramallah in a deliberate Israeli escalation.

According to eyewitnesses, the Israeli occupation soldiers and members of the Israeli police shot a young man after chasing him.

On Friday Palestinian local media said that Israeli occupation forces had opened fire and killed a young Palestinian man who was driving his car in the vicinity of a settlement near the village of Nabi Saleh, located to the northwest of Ramallah.

The incident caused an uproar among the Palestinian villagers living in the area. Israeli soldiers then opened fire at the angry protesters.

Palestine’s media out let said a protester was injured during the clashes that erupted in Nabi Saleh.

Clashes in the occupied West Bank come as Israeli regime plans to roll out a highly controversial plan to annex territories it occupied against the international will after the 1997 war with Arab countries.

The Palestinian government has repeatedly warned that the implementation of the plan, which has gained the approval of the Israeli cabinet and parliament, would spark huge unrest in the West Bank and other Palestinian territories.

The plan also faces growing international criticism as governments around the world continue to condemn it as a violation of United Nations resolutions on the status of Palestine.

Opponents say lands that Israel plan to annex by relying on extensive support from the United States are those that Palestinians seek to establish as their future state.

Israeli soldiers killed, on Friday evening, a Palestinian father of five children, including an infant, allegedly after he tried to ram them with his car near Nabi Saleh village, northwest of the central West Bank city of Ramallah. His family denied the military allegations and said the man lost control of his car after Israeli colonialist settlers opened fire at it.

The slain man has been identified as Fadi Adnan Sarhan Samara, 37, a father of five children, including an infant (two months of age) from Abu Qash village, north of Ramallah.

He works in Israel and came back home to Nabi Saleh to celebrate the Muslim feast of al-Fitr with his family.

His brothers stated that he left his home in the evening heading to the az-Zawiya village, west of Salfit in central West Bank, to drive his wife and children back home, as they were visiting her family there.

The Israeli army claimed that the man tried to ram soldiers with his car near a natural spring in the Ramallah governorate. He was shot in the leg and was left to bleed for about an hour, without any first aid.

Palestinian media outlets and residents in the area said the man lost control of his car when illegal Israeli colonialist settlers, who repeatedly invade the area, opened fire at his car, before the soldiers fired a barrage of live rounds at it, claiming that he was attempting to ram them.

One of his brothers, and one of his cousins, were both detained by the army, and after being released, they stated that an army officer told them, after confirming his identity, that they cannot take his corpse for burial.

They stated that the military was taunting them by stating that the family can have his corpse back “maybe in an hour or two, a month or two, a year or two….”

His family, and the residents of his village, strongly denounced his murder, and stated that the Israeli soldiers are always “trigger happy” when it comes to shooting Palestinians, and that the army tries to justify these crimes by making false allegations.

They called for a serious investigation into the fatal shooting and called on international organizations to act and hold Israel accountable at the International Criminal Court (ICC) for its escalating crimes and ongoing violations against the Palestinian people, their homes and property.

Protests erupted after the fatal shooting of the Palestinian man, and the soldiers fired live rounds and rubber-coated steel rounds.

A Palestinian man with Downs Syndrome was struck with a live round in his leg.

Eyad Hallaq, 32, resided in the East Jerusalem neighborhood of Wadi Joz. He attended and worked in a special needs school in the Old City, just meters away from where he was shot.

the Border Police, the officers noticed the Palestinian carrying a suspicious object that they thought was a gun and ordered him to stop. After the man refused and started fleeing the scene, the officers started chasing him on foot and opened fire, ultimately killing him.

According to an initial investigation, two officers began chasing Hallaq after they were told by other police that he was a terrorist. The more senior officer of the two shot in the air while the junior officer shot at Hallaq, who was trying to hide behind a dumpster. According to a source familiar with the investigation, the junior officer – who was a new recruit and was armed with an M16 – continued shooting at Hallaq even after being told by his commander to stop, and did so because he saw that Hallaq was still moving. A Jerusalem court has issued a gag order on the names of the police officers.

Speaking with Haaretz, Hallaq family members said “he wasn’t capable of harming anyone” and was autistic and classified as disabled.

Two weeks ago, Israeli security guards shot to death a mentally ill Israeli Arab at an Israeli hospital. In 2018, a disabled Palestinian was shot dead in the West Bank while trying to retreat from Israeli soldiers.

Hallaq’s body was transferred to the Institute of Forensic Medicine. Hallaq’s family demanded that a Palestinian representative be present at the autopsy. The family later said that the Palestinian pathologist was prevented from entering.

Hallaq’s father said that his son would go to the special needs school every day. “He never had problems with the police. In the morning we received a call from the special needs facility, telling us our son had been killed.”