You Are Here: Home → A cruel, yet very usual Israeli incident that almost nobody knows about 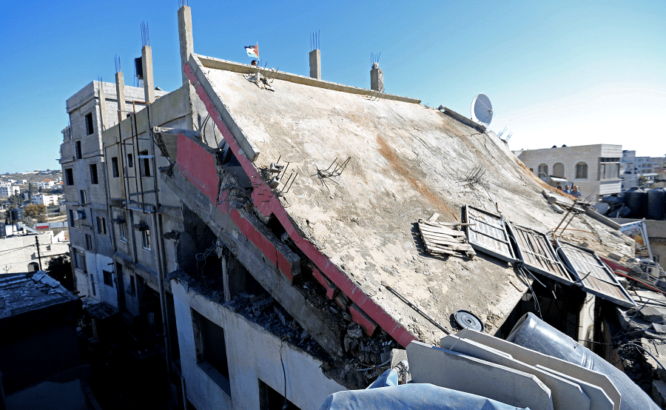 The Abu Hmeid home in Amari refugee camp in Ramallah after it was blown up by the Israeli army. (WAFA Images / Huthayfa Srour)

The illegal Israeli occupation continues its illegal collective punishment by demolishing the home of an alleged terrorist’s family and terrorizing the entire neighborhood.

Few news services covered this story – AFP was one of them – but Americans ought to know how their hard-earned tax dollars were spent by Israel last night.

Israeli soldiers conduct violent raids all over the occupied West Bank literally every night, dragging people out of bed, beating up, and arresting Palestinians. Children are routinely traumatized, women are threatened, men are humiliated. Nearly every family in the West Bank has been touched by these incidents.

Israeli journalist Gideon Levy commented on one such incident:

Israeli morality says that soldiers can break in anytime, anywhere and do whatever they want…The Palestinians, according to this morality, must give in gladly, or at least not dare protect themselves, their families, their dignity or their property. Resistance is prohibited and only leads to one outcome. Islam Abu Hmeid, 32, had the gall to go against this arrangement. He’s suspected of dropping a marble slab on soldiers who invaded his home, and of causing [Staff Sgt. Ronen] Lubarsky’s death.

Abu Hmeid has not been found guilty or even tried yet.

But before dawn today, November 15th, a harsh sentence was carried out, not on the alleged perpetrator, but on his family and neighborhood.

Israel routinely demolishes the homes of Palestinians who resist the occupation, claiming demolition is a deterrent to other would-be resisters; however human rights groups persistently call for the practice to be stopped because it is a form of collective punishment – illegal according to international law.

The Abu Hmeid family has known that demolition equipment would show up at some point. The Israeli military originally planned to demolish one floor of the building, but decided instead to destroy the whole building. The family went to court to appeal this decision.

I am aware of the harm the demolition will cause to the building’s residents. However…given the importance of an effective deterrence in our case and in general for the physical security of Israeli citizens, I am of the opinion that none of the harm [to the terrorist’s family] involved here, as serious as it is, would justify reducing the scope of the demolition order.

A note about Israel’s courts

Elsewhere, on the subject of home demolitions – a form of collective punishment – the Israeli Supreme Court has commented that, while it recognizes that families had not participated in attacks in any way, “we are far from seeing the petitioners as people with innocent hearts.”

the immediate aim of demolishing the house is not to deny rights or freedoms of that person but to cause suffering to his family… the objection to [this form of] collective punishment is that it is cruel and inhuman.

The Israeli Supreme Court has also allowed for the use of torture, the widespread building of settlements, the use of live fire against unarmed Palestinians, and other practices that would be considered inhuman anywhere else in the world.

Every one of these practices is illegal according to international law.

The myth of home demolition as a deterrent

Studies have indicated that punitive home demolitions actually result in an increase, not a decrease, in violence.

One might be tempted to speculate that these demolitions are not just ineffective, but a form of incitement.

Palestine TV live streamed the middle-of-the-night preparations for leveling the home, a process that took about 5 hours.

A large number of Israeli soldiers knocked down walls and placed explosives while others patrolled the neighborhood, evacuating hundreds of Palestinians at gunpoint from surrounding buildings, rushing them to a nearby football field with no chance to grab blankets to protect them from the cold, or food for their children. Israeli sharpshooters took up positions on top of buildings for crowd control.

IMEMC reported that Israeli soldiers attacked and beat Palestinian journalists, assaulted medical personnel who came to their aid, shot scores of Palestinian protesters with rubber-coated steel bullets and live ammunition, teargassed a Palestinian ambulance, and abducted and detained over 300 Palestinians.

Additional reports indicate that a Palestinian woman in labor was at first refused permission to go to the hospital, but later allowed. Dozens of others have subsequently been hospitalized for injuries.

The Palestinian Red Crescent Society (PRCS) was eventually allowed to move women and children inside a shelter and provide them with blankets and food.

A family history of resistance

In an interview with Islam Abu Hmeid’s parents, they recounted the background of their family’s previous encounters with Israel’s military establishment.

In 1987, one of their sons was killed by the IDF; in 2002, another son was also killed; 4 other sons are serving long-term or life sentences, and now the youngest son, Islam, is expected to receive the same punishment. Islam has already served time as a political prisoner.

Latifa Abu Hmeid declared that she is proud of her children, that they were sentenced by an “illegal court of occupation,” and that the family will remain steadfast in their resistance against the occupation.

Her expression of pride in her children’s actions is not uncommon among Palestinians. Her view – which is actually enshrined in international law – is that Palestinians need not passively endure the brutal Israeli occupation, but may resist, even violently. Violent resistance may not target civilians, a line which Palestinians have at times crossed during the 51+ years of Israel’s illegal, belligerent occupation.

The Israeli army has demolished the Abu Hmeid home twice before – in 1994 and 2003 – and the community has helped rebuild it.

Two explosions took down the Abu Hmeid home, the first destroying the interior, the second bringing the building down and causing structural damage to nearby homes.

Walid Assaf, head of the Wall and Settlements’ Resistance Commission, has announced that a committee has been formed to rebuild the home, and that a temporary home will be provided for the family meanwhile.

Hundreds of Palestinian men were still being detained at the time of the demolition, and dozens were hospitalized, including at least one journalist who was shot in the head with a gas bomb.

It remains to be seen whether the “deterrent” policy will be effective.