You Are Here: Home → WATCH: Palestinian father forced to demolish home in Jerusalem 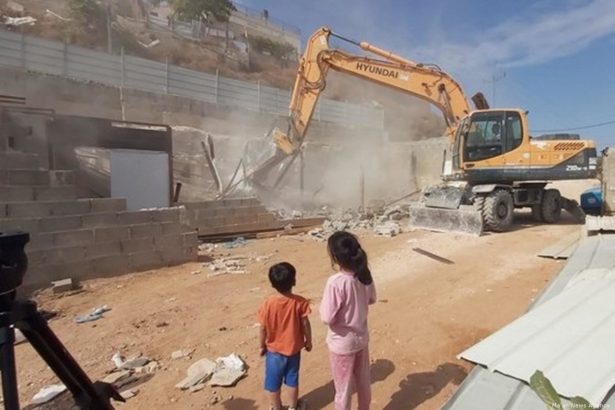 A Palestinian man was forced to demolish his home by Israel ‘because it was too near the U.S. embassy’… Read two reports about the incident below:

Reposted from IMEMCnews
A Palestinian resident of the Jabal al Mukabbir neighborhood, in East Jerusalem, tore down his home after he received a demolition order from the Israeli authorities, said a local official.

Fateh movement’s secretary general in Jabal al-Mukabbir, Iyad Bashir, told WAFA that Sultan Bashir got the demolition order for his 50-square-meter house a month ago, under the pretext of proximity to the US embassy, which is illegally located in Jerusalem.

Bashir was forced to demolish his own house to avoid paying exorbitant costs, should the Israeli West Jerusalem municipality have to carry out the task.

A Palestinian man has been forced to demolish his own house in the town of Jabal Al-Mukaber, south of Jerusalem. Sultan Bashir had to watch as his family home was destroyed; it used to house him and his family of eight. The alternative to doing this himself would have been to pay the Israeli occupation authorities to do it.

“I built the house stone by stone and slowly completed it and tidied it up,” Bashir told the Palestinian Authority’s Wafa News Agency, “but the municipality hounded us. This is the price of steadfastness in the city of Jerusalem: after the completion of the construction of our modest house and housing where the municipality began to hound us, the municipal mechanisms will demolish it and I will pay the cost.”

He pointed out that attempts to displace the Palestinians are ongoing. “Nevertheless, we are stationed here… Although the building does not exceed an area of 50 metres and is made of brick, wood and reinforced steel sheet, we were hounded [by the authorities].”

Bashir’s house is also reportedly not the only one set to be destroyed. There is, insist local residents, a campaign to try to displace Palestinian residents in the occupied territories.

“Most of the 500 residents of the Bashir neighbourhood in the village of Jabal Al-Mukaber have received demolition notices or summonses to the municipality,” said Iyad Bashir, the head of the Fatah movement in the village. “The pretext is building without a licence.”

Israel is increasing the number of Palestinian homes that it is destroying. Indeed, whole neighbourhoods and in some cases whole villages have been demolished by the Israeli authorities – Al-Araqeeb, for example, has been destroyed 162 times so far – in a widespread campaign to change the demographics and make space for more Jewish settlers and their settlements to be established.

Moreover, some Palestinian families are evicted from their homes and occupied by settlers without being destroyed. Jewish settlers also destroy Palestinian farmland in order to deprive the families of their own produce.

The building of illegal Jewish settlements in the occupied Palestinian territories has been a bone of contention in negotiations, particularly since they are in direct violation of international law. Article 49 of the Fourth Geneva Convention relative to the Protection of Civilian Persons forbids occupying states from transferring their civilians to the occupied territories, as does the International Criminal Court (ICC) Convention of 1998, which regards this as a war crime.

Israel clears Palestinians and homes so its military can practice