You Are Here: Home → Watch what you say: Israel controls the narrative 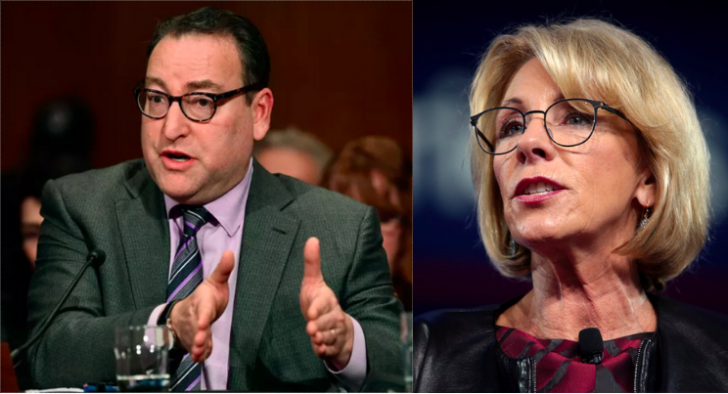 Pictured above: Kenneth Marcus, Education Department’s Assistant Secretary of Civil Rights, and Betsy Devos, U.S. Secretary of Education. Marcus has spearheaded the drive to eliminate any pushback against Israeli actions at colleges. The White House, acting through the Department of Education and Devos, is functioning as thought police on behalf of the Jewish state.

The Israel Lobby has America so well-trained that everyone self-censors: mainstream media, think tanks, politicians (of course), universities, courts, even K-12 curriculum editors play by the rules.

by Philip Giraldi, reposted from the Unz Review

It is interesting to note how the Israel Lobby is able to manage and contain the commentary of groups in America that might normally be critical of Israeli policies vis-à-vis the United States. A recent article by Professor Andrew Bacevich entitled “President Trump, Please End the American Era in the Middle East” is a good example of how self-censorship by authors works. The piece appeared as one of Bacevich’s regular weekly contributions to The American Conservative website under the rubric “Realism and Restraint.”

The article particularly focused on the foreign policy pronouncements of Bret Stephens, the resident neocon who writes for The New York Times. Stephens, per Bacevich, has been urging constant war in the Middle East and worrying lest “we may be witnessing the beginning of the end of the American era in the Middle East.”

Bacevich, unlike Stephens, is a genuine foreign policy expert, a realist, an Army veteran, and always quite sensible. He correctly described how “in the Middle East, the military power of the United States has played a large part in exacerbating problems rather than contributing to their solution.”

Sins of omission: criticize any state except Israel

The overall message is sound, but in this case, it is interesting to note what Bacevich left out rather than what he included. It is easy to understand the “realism” part when he writes and it is sometimes also possible to perceive the “restraint.” He cited Iran seven times as well as Saudi Arabia, but, strangely enough, he never mentioned Israel at all, which a number of commenters on the piece noted. It rather suggests that there is a line that Bacevich is reluctant to cross.

The omission is particularly odd as Israel is absolutely central to and might even be described as driving American policy in the Middle East and Bret Stephens, whom Bacevich excoriates, is a notable Israel-firster who once worked as the editor of the Jerusalem Post. Almost everything Stephens writes is basically a promotion of Israel and its interests coupled with a call for the United States to do what it must to attack and destroy the Jewish state’s principal perceived enemy Iran.

The reticence is perhaps understandable as Bacevich is president of a newly organized group called the Quincy Institute for Responsible Statecraft, which I have written about previously, that will have its official launch in November. It claims to promote “ideas that move U.S. foreign policy away from endless war and toward vigorous diplomacy in the pursuit of international peace” and further takes some pride in being non-partisan though bipartisan might be a better description.

To be sure, Quincy’s two major donors are the highly controversial George Soros on the globalist left and the equally notorious Koch Foundation on the libertarian-lite right, which leads one to wonder who is ordering the restraint when it comes to Israel. Or is it both of them as neither organization, though very active in foreign policy, has indicated any desire to seriously criticize the many crimes of the Jewish state.

I appear to have accurately predicted in my earlier article on Quincy that “…there will inevitably be major issues that Quincy will be afraid to confront, including the significant role played by Israel and its friends in driving America’s interventionist foreign policy.”

Indeed, anyone who wants to be a player in Washington DC has to avoid the Israel hot wire. That it should be so is a tribute to the power of the Jewish lobby coupled with the bulk support and Bible-belt votes of its brain-dead Christian Zionist spear carriers. Congress, once described by Pat Buchanan as “Israeli-occupied territory,” likewise knows whom not to offend lest one be unemployed in the next electoral cycle.

That is why criminalizing criticism of Israel or support of a non-violent boycott of the country are regularly introduced in Congress and find themselves with more than one hundred sponsors and co-sponsors. Nearly two dozen such pro-Israel bills are currently at certain points in the legislative process, including one that will enable aggrieved Israelis to sue the Palestinian Authority (PA) in sympathetic U.S. courts for damages, a move that will potentially bankrupt the PA.

And the colleges and universities have not been immune from pressure to conform to the pro-Israel narrative.

The White House acting through the Department of Education is functioning as thought police on behalf of the Jewish state. It is currently planning on withholding some federal funding of the University of North Carolina and Duke because their joint Middle Eastern studies program does not meet alleged government standards. The standards involved relate to the fact that the program has had speakers and course content that can be construed as critical of Israel and friendly to Muslims.

The message clearly being sent to the schools by the Trump Administration is that if you criticize the Jewish state you will be punished.

The drive to eliminate any pushback against Israeli actions at colleges has been spearheaded by leading Zionist Kenneth L. Marcus, who was appointed the Education Department’s Assistant Secretary of Civil Rights. Marcus, who has worked as a paid pro-Israel activist, has been urging the government to define the BDS movement as anti-Semitic and has used his office to designate any Palestinian advocacy as a violation of Jewish students’ civil rights.

The federal action to enforce educational conformity on Israel is not exactly new as universities have long since been self-censoring, just like Bacevich, normally in response to complaints by Jewish groups.

To cite only one example, in 2013, at nominally Catholic Fordham University in New York City, a student group sought to form a Students for Justice in Palestine (SJP) club. Their paperwork advised that their goal was to “build support in the Fordham community among people of all ethnic and religious backgrounds for the promotion of justice, human rights, liberation and self-determination for the indigenous Palestinian people.” The applicants also revealed that they would support the Boycott, Divestment and Sanctions (BDS) movement.

Three years later, Fordham’s Dean of Education denied the application because of the support for BDS. The students took Fordham to court and in August of this year, three years later, a New York judge finally struck down the decision as “arbitrary and capricious.”

So it took six years and a lawsuit to enable a group of students to form a club that was admittedly political in nature but non-violent and welcoming of everyone. So much for freedom of speech and association at America’s colleges and universities when they run up against the Israel wall.

What is less observed is how Israel’s message is promoted at the state and local levels. At the state level, anti-BDS legislation is now the rule in 26 states, with some requiring government employees to sign a pledge not to boycott Israel.

And the same thing is happening among Boards of Education. Fourteen states now require holocaust education, where students are compelled to read fiction like Eli Wiesel’s “Night” while also consuming the established and standard, largely fabricated, account of what the so-called holocaust was all about.

In Virginia, for example, a shadowy group called the Institute for Curriculum Services (ICS), which is actually a “partisan group with backing by state and local Israel advocacy organizations,” is seeking to change the information conveyed by the history and social studies textbooks used in K-12 classrooms across the state.

ICS recommended changes include: “1. Emphasizing Arab culpability for crisis initiation leading to military action and failure of peace efforts—and never Israeli culpability, even when it is undisputed historic fact. 2. Replacing the commonly used words of “settlers” with “communities,” “occupation” with “control of,” “wall” with “security fence,” and “militant” with “terrorist.” 3. Referencing Israeli claims such as “Israel annexed East Jerusalem” and the Golan Heights as accepted facts without referencing lack of official recognition by the United Nations and most member nation states.”

The ICS is only one example of the persistent Israel Lobby brainwashing of the American public on behalf of the Jewish state to completely alter the narrative about what is going on in the Middle East. Taken all together, the self-censorship of groups and individuals that wish to remain viable by ignoring the Israel problem, the criminalization of non-violent movements like BDS, and the pressure on universities and schools to conform with positive narratives about Israel means that any genuine understanding of that nation’s war crimes and crimes against humanity will, unfortunately, remain on the margins.

Philip M. Giraldi, Ph.D., is Executive Director of the Council for the National Interest, a Washington-based advocacy group that seeks to encourage and promote a U.S. foreign policy in the Middle East that is consistent with American values and interests. Giraldi is a former CIA counter-terrorism specialist and military intelligence officer who served 19 years overseas in Turkey, Italy, Germany, and Spain. He was the CIA Chief of Base for the Barcelona Olympics in 1992 and was one of the first Americans to enter Afghanistan in December 2001.

The Pro-Israel Push to Purge US Campus Critics

Israel lobbyists write the laws that state legislators then pass

Israel’s Fifth Column: Exercising control from inside the government