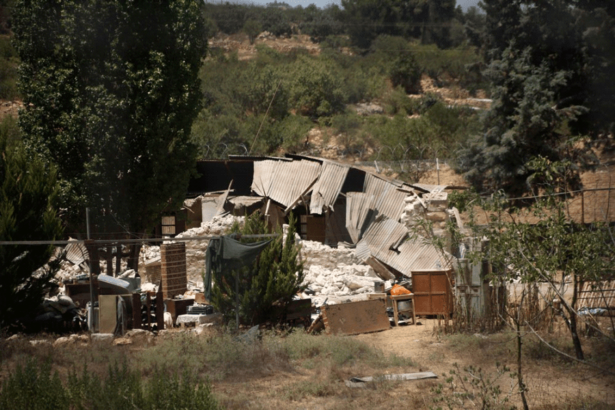 The Samara home in Beit al-Baraka after it was destroyed by Israel settlers. (WAFA Images / Samar Badr)

Israeli settlers – protected by Israeli military – demolished 2 homes on a church compound, although the owner had a court order protecting the property, and his belongings were still inside.

Israeli settlers, escorting a bulldozer, on Monday, demolished two Palestinian homes at Beit al-Baraka church compound at the Hebron-Jerusalem road, despite the presence of a court order allowing the owners to stay in their homes, according to the owner of the two homes, Ahmad Samara.

He told WAFA that scores of settlers from several hardcore illegal settlements, including Kiryat Arba, north of Hebron, and protected by Israeli forces, escorted a bulldozer into Beit al-Baraka church compound and proceeded to demolished the two homes where he and his family had lived for over 40 years.

Samara said that when the family attempted to stop the demolition and to show the army the Israeli court order that allows it stay in the homes, the soldiers and settlers assaulted him and his family, threw them out of their homes and detained his daughter, Asmaa, 32.

“I have lived in these two homes for over 40 years. I have an ]Israeli[ court ruling preventing settlers from bothering us and allowing me and my family to continue to live in the homes,” said Samara. “We have no where to go now.”

He said the settlers and soldiers ransacked his homes and prevented him from removing his belongings before they carried out the demolition at gun point.

Beit al-Baraka, meaning “House of Blessing”, built 70 years ago, is a 38-dunam (9.5-acre) church compound located on the main road between Bethlehem and Hebron, opposite to Arroub refugee camp. It used to serve as a hospital providing free treatment to people suffering from tuberculosis until it was shut down in 1983. Jewish settlers later bought the compound from the church, through a fake company.