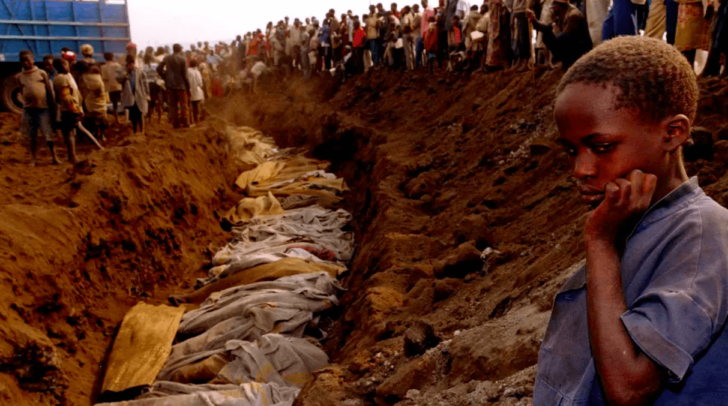 A Rwandan refugee girl stares at a mass grave where dozens of bodies have been laid to rest, July 20, 1994.

By Chaim Levinson, reposted from the Israeli newspaper Ha’aretz

The international community awoke too late to the humanitarian crisis in the aftermath of the 1994 genocide in Rwanda, which claimed the lives of some 800,000 people, most of them ethnic Tutsis.

It emerges that in Israel, there were those who wanted to offer aid to the victims while the genocide was raging, and there were officials who were opposed to it.

Discussions about offering aid to Rwanda started at the end of May, a month and a half after the genocide had started.

“A shipment of medicine and supplies at a time when Kupat Holim Clalit (Israel’s largest HMO) is in crisis over a budget shortfall will become a source of public disdain,” Prof. Mordechai Shani, then director general of the Health Ministry, wrote to the Foreign Ministry in June.

“If the Foreign Ministry wants to do public relations, it alone shall bear responsibility for it,” added Shani, who went on to be an Israel Prize laureate in 2009.