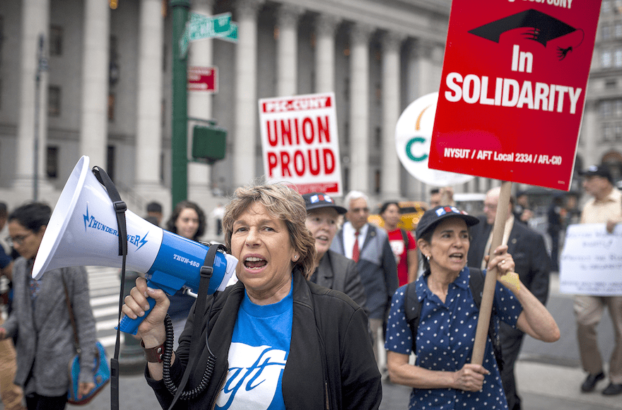 President of the American Federation of Teachers Randi Weingarten, with megaphone, marches in a New York City rally, June 27, 2018.

The Jewish Telegraphic Agency (JTA) reports a disconnect between the president of the American Federation of Teachers, Randi Weingarten, and its members.

JTA reports: “Weingarten is Jewish. Her union, which counts 1.7 million members in 3,000 chapters, is not. It’s typically more concerned with issues like raising teachers’ pay and strengthening public schools than with, say, the actions of a local police department in a country on the other side of the globe.”

Despite that, JTA reports, Weingarten “says supporting a progressive vision of the Jewish state is part of her union’s mission.”

According to JTA, “AFT’s position on Israel sounds like that of a liberal Zionist group… the teachers’ union is embracing left-wing Israeli activists — and criticizing the country from a place of love.”

The nation-state bill enshrines, in the words of one analyst, “ethnic supremacy,” and makes blatant Israel’s longstanding discriminatory system against non-Jews.

Weingarten’s statement said: “These anti-democratic and nativist actions make it more imperative to support the progressive voices in Israel who are fighting to reclaim Israel’s place as a functional, thriving democracy in the Middle East.”

JTA reports: “AFT is not the only union to have a history of supporting Israel. American labor unions had heavy Jewish representation at the time of Israel’s birth, and the country’s socialist roots and still-powerful national union appeal to American labor leaders.”

Israel was created in 1948 by violently expelling most of the indigenous population from their homes.

JTA says that labor officials told its reporter that despite Israel’s right-wing government “there’s a lot they admire in Israel — from universal health care to robust workers’ rights.”

This  view ignores the fact that Israel has a long record of systemic discrimination against non-Jewish members of its population, and human rights abuses and violence against Palestinians living under Israeli occupation.

Yet, JTA reports, “In 2007 a long list of major labor leaders signed a statement opposing BDS, the Boycott, Divestment and Sanctions movement against Israel.”

In addition, JTA states, “Labor unions have given millions of dollars to Yitzhak Rabin Center, a museum and educational center honoring the assassinated Israeli Labor Party leader who signed an Israeli-Palestinian peace accord.”

Rabin is also known for his “break the bones” policy against unarmed Palestinian protestors.

JTA reports that the Jewish Labor Committee, which acts as the Jewish community’s representative in the American labor movement and organized the 2007 anti-BDS statement, released its own condemnation of Israel’s nation-state law as “ill-conceived and ill-timed.”

The group’s president, Stuart Appelbaum, is quoted as saying that while major unions still support Israel, he is “worried about Israel losing the support of U.S. progressives.”

Weingarten seems to have the same concern and has increasingly moved AFT into supporting “progressive” Zionists in Israel. The union passed a resolution to partner with an Israeli network of bilingual Hebrew-Arabic schools with a mixed Jewish and Palestinian student body.

She has spoken at conferences of the liberal Zionist organization J Street and has met with both Israeli and Palestinian unions during trips to Israel. (it’s unclear who pays for all her trips.)

JTA says: “Supporting Israel is also a personal cause for Weingarten. She grew up in an involved Jewish home and attended Camp Ramah in New England.” JTA  quotes Weingarten: “I am a Ramahnik. I grew up as a progressive Zionist.”

JTA reports that Weingarten “is a member of Congregation Beit Simchat Torah in New York City and is newly married to its senior rabbi, Sharon Kleinbaum. And she is the latest Jewish AFT president, following predecessors like Sandra Feldman and Albert Shanker.”

JTA points out that a “handful of unions in the United States have joined major unions abroad in endorsing BDS.”

On June 19th a local branch of AFT, the Graduate Employees’ Organization of the University of Illinois at Urbana-Champaign, issued a statement saying the members had “watched in outrage, sadness, and horror as Israeli snipers have maimed and murdered Palestinian children, young adults, journalists, and medical first responders in Gaza over the past month.”

The GEO statement asked: “How many people in the U.S. labor movement are aware that Palestinian workers held a general strike on May 15, Nakba Day, in protest of incrementally-genocidal Israeli settler colonization? How many U.S. labor leaders have declared solidarity with Palestinian workers?”

“We are saddened and disappointed that our own AFT/IFT leadership have a history not only of silence on these matters, but complicity with the racist and genocidal regime that guns down unarmed Palestinians in the open air prison that is Gaza.

“We are saddened and disappointed in the hostility that AFT leaders such as Randi Weingarten have expressed to the internationally-respected and non-violent tactic of BDS. Such leaders are out of touch and out of step with the rank and file of our union. We, the GEO, proudly endorsed a Divestment campaign led by Palestinian students on our campus this academic year (2017-2018), and we plan to do likewise next year.”

The statement called on AFT leaders to condemn “Israel’s murderous aggression and blatant human rights abuses against Palestinians, and to act in substantive solidarity with the Palestinian people who are struggling against racism, apartheid, and colonization—struggling for freedom. A labor movement that does not fight for justice against the bullies of the world is no labor movement at all.”