You Are Here: Home → Virgin Airlines’ Richard Branson – a force for justice for Palestinians?

Virgin Airlines’ Richard Branson – a force for justice for Palestinians? 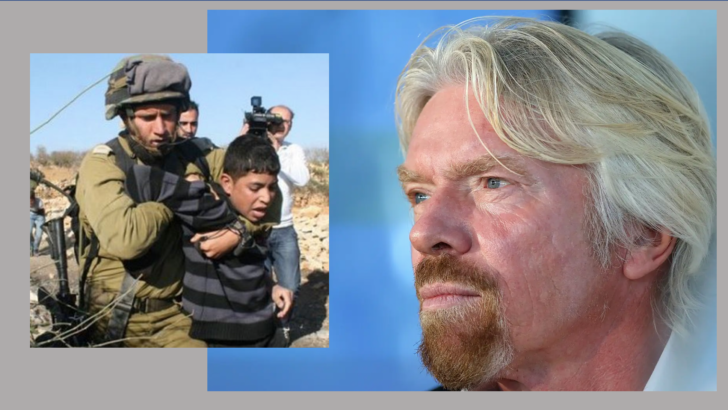 Richard Branson has displayed an interest in justice and peace for Palestinians – now he is positioned to make it a reality.

Sir Richard Branson, billionaire, activist, and philanthropist, understands the Palestinian plight. As his airline begins operation in Israel, will he be true to his own philosophy, “social justice is good for business”?

Last week, Sir Richard Branson, head of venture capital conglomerate, Virgin Group, made headlines when he emerged from his Virgin Atlantic flight and kissed the ground in the Tel Aviv airport. The action sparks questions about Branson’s years-long devotion to the cause of justice.

The billionaire’s visit to Tel Aviv coincided with the announcement of new Virgin Holidays vacation packages in Israel. The escorted tours will be available beginning in 2020. One of the excursions, named “Classic Israel,” includes time in Bethlehem – which is, significantly, not in Israel, but in Israeli-occupied Palestinian territory. (This is common practice among pro-Israel tour guides, but perhaps the Virgin package would work with this group instead.)

When asked about his impressions of Israel, Branson told the Jewish Telegraphic Agency that “Israel and Palestine” had a great number of entrepreneurs who were “wonderful, resilient people.” (Israeli newspapers widely quoted him as referring only to Israeli entrepreneurs, but in reality he referred to both groups at least three times.) He also mentioned, “We have invested in both Israel and Palestine.”

In fact, Richard Branson has had an eye on the people of Palestine for at least a dozen years.

In 2007, Sir Richard Branson partnered with former South African President Nelson Mandela and musician and human rights advocate Peter Gabriel to create an international peace and justice alliance. World-class figures came together to tackle some of the toughest issues of our time, including nuclear nonproliferation, climate change, and access to justice.

The group – still in existence – is called the Elders.

Sir Richard Branson is one of the group’s biggest donors and a member of the Elders’ Advisory Council.

Richard Branson was with the Elders when they visited Israel and Palestine in 2009. He declared, “As human beings, all of us wish to see a resolution [to the Palestine issue], because if you don’t have a resolution, I think something ghastly could happen one day.” In fact just months later, Israel launched an incursion into Gaza that killed over 1,400 Gazans and nine Israelis. (Members of the group have returned to the region a number of times since.)

The long-running Israeli-Palestinian conflict has been one of The Elders’ top priorities since the group was founded…Given the far-reaching impact of the unresolved conflict and the power imbalance between the parties, The Elders believe the international community has a vital role to play in helping Israelis and Palestinians reach a lasting solution…

The Elders call for a resolution to the issue “based on universal human rights and international humanitarian law,” including a return to the pre-1967 borders, a Palestinian capital in East Jerusalem, an end to the siege of Gaza, and just solutions to the issues of Palestinian refugees, settlement and annexation, mutual security, and division of natural resources.

The organization condemned President Trump’s decision to move the US Embassy to Jerusalem, Israel’s killing of unarmed protesters in Gaza, and the US withdrawal funding from UNRWA.

Individual members of the consortium have denounced Israeli policy and practice: Desmond Tutu, for example, used the word “apartheid” as early as 2002 to describe the situation; Nelson Mandela famously said, “We know too well that our freedom is incomplete without the freedom of the Palestinians”; President Jimmy Carter stated in his 2007 book, Peace Not Apartheid, that peace will be possible “only when the Israeli government is willing to comply with international law…The United States is squandering international prestige and goodwill and intensifying global anti-American terrorism by unofficially condoning or abetting the Israeli confiscation and colonization of Palestinian territories.”

Statements released by the Elders as a group (such as this, this, and this) make an honest attempt to assess the issue – more honest than most politicians. They clearly feel no obligation to treat Israel with kid gloves. (They could go further in their demands for justice, and confront the futility of the two-state solution – few groups have taken these steps.)

As recently as 2018, the company instructed Virgin Holidays’ destination managers on human rights issue awareness and reporting. Its “2018 Modern Slavery Statement” explained, “We have a regular presence in our top selling destinations and our people are encouraged and empowered to observe and raise any particular concerns…Our people engage with our customers and suppliers every day [and] need to understand how to uphold our human rights standards.”

In addition, a company-wide whistleblowing policy is in place to field any employee concern that “goes against our policies and values,” confidentially, without fear of reprisal.

Virgin Atlantic’s website spells out its Responsible Supplier Policy: “to source goods and services in a way that treats the people we work with, directly and indirectly, with respect and dignity” based on international human rights standards – such as the UN Universal Declaration of Human Rights.

Sir Richard Branson has personally advocated for human rights – for Palestinians and other groups – at times on the company website and Facebook page.

In 2014, during and after the Israeli incursion into Gaza that killed 2,250 Palestinians and 73 Israelis, Branson released statements on his Virgin website, calling for a worldwide commitment to the rebuilding of Gaza and “an internationally recognized state [for Palestinians], where they can live their lives with dignity.”

In another reference, he recognized the disproportionate nature of the conflict: “Just watching Israel bombarding Palestine, and Palestine sending one or two little rockets over to Israel—it’s just too sad for words.” (In this “war,” Israel killed over 2,200 Palestinians; 73 Israelis were killed.)

Branson has also made general statements: “Inequality is probably the biggest prohibitor that we face to creating a sustainable and equitable future for all of us,” and “social justice is good for business,”

Sir Richard Branson gave up control of Virgin Atlantic in July 2017, when he sold stakes in the airline taking him from 51% down to 20%. (He remains president of the company.) A few months later, a scandal erupted.

Virgin Atlantic served an appetizer aboard some flights, identified on the menu as “Palestinian couscous salad.” This drew sharp criticism from Israel supporters, some of whom called for a boycott of the airline and accused it of sympathizing with terrorists. Some targeted Branson himself, saying that he had shown his “true colors” (presumably as anti-Israel).

Following the brouhaha, the word “Palestinian” was removed from the menu (the food item continued to be served), and the management apologized for the “offense caused.”

A spokesperson for the airline acknowledged that couscous was a Palestinian dish, but explained the decision as “a result of feedback.”

Is Branson a true advocate for Palestinian justice, or a player?

Richard Branson has not been bashful in his calls for Palestinians to get a fair shake. Taking a stand against Israel’s supposed “right to self-defense,” setting justice and peace as priorities – these are positions that often come at high social cost.

But billionaires have plenty of social capital, and can afford to throw money at human rights causes. Branson has signed the Giving Pledge, in which he vowed to give away more than half of his fortune to philanthropic causes during his lifetime. (That still leaves him with up to $2 billion.)

What would make Sir Richard Branson a true advocate for Palestinian justice, not just a big talker? He could dare to demand of his new destination, Israel, the same human rights standards he required in Virgin Atlantic – respect and dignity for all people directly or indirectly impacted by the company, based on the principles laid out in the UN Universal Declaration on Human Rights.

Why? Because Richard Branson has what Israel craves: recognition, a vehicle to take the country to legitimacy, a golden ticket to the high tech world that Israel wants more than just about anything.

Branson could be considered a Palestine ally with leverage.

You could potentially create a legacy of epic proportions – if you dare. You could change the lives of millions of Palestinians who have lived on the edge of hopelessness for decades.

The “something ghastly” you spoke of ten years ago has happened, is happening.

Please, in your unique position at this moment, invoke your philosophy – “social justice is good for business” – and demand Israeli compliance with the UN Universal Declaration on Human Rights.

The Declaration states that all rights and freedoms belong to all people, “without distinction of any kind…[including] national or social origin” – yet as you know, Israel maintains separate, discriminatory laws and policies that apply only to Palestinians.

The Declaration affirms that “no one shall be subjected to torture,” that accused persons have the right to “a fair and public hearing, ”and that “no one shall be subjected to arbitrary arrest, detention or exile” – yet Israel routinely tortures Palestinian prisoners (including children), operates a military court system for Palestinians in violation of international law, and has practiced arbitrary arrest, detention, and exile for decades.

Israel also regularly violates Palestinian rights to “freedom of movement and residence within the borders of each state,” to “leave any country, including his own, and to return to his country,” and to “a standard of living adequate for the health and well-being of himself and of his family, including food, clothing, housing and medical care.” Indeed, the UN-guaranteed right of return is, for many Palestinians, a top priority and arguably one of their most important demands. (The right of return was also emphasized in a UN resolution in 1948.)

All of this you know, Sir Richard, and all of this you deplore. Will you put your mouth where your money is by calling out Israel for its many human rights violations and demanding compliance with the United Nations document – before you do business there?

…or will you kiss the ground that was stolen from indigenous peoples?