You Are Here: Home → Patriot owner pledges $20 million to set up yet another foundation for Israel 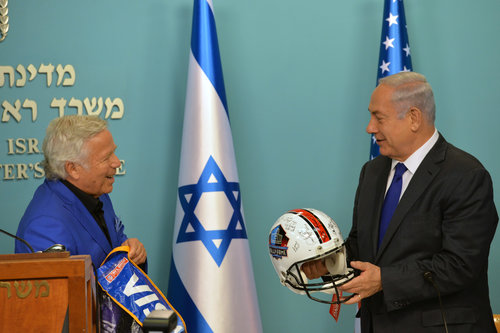 $20 million for a new anti-BDS organization is enough to earn Robert Kraft “the Jewish Nobel” and forgiveness for soliciting prostitution.

New England Patriots owner Robert Kraft yesterday pledged $20 million to establish a new foundation that will work to counter “BDS,” the international movement to boycott Israel over its violations of human rights.

Kraft also said that the foundation will combat “antisemitism,” which is often defined to mean criticism of Israel.

The pro-Israel lobby in the US includes hundreds of entities that support Israel. It has succeeded in obtaining over $10 million per day of US taxpayer money to Israel.

Kraft’s new project is named “the Foundation for Social Media Messaging Against Antisemitism.” It has already received two $5 million pledges from additional Israel partisans, one by Roman Abramovich, a Russian-Israeli billionaire who owns the Chelsea Football Club in England.

Kraft made the announcement in Israel where he was receiving the “Genesis Prize.” The prize is called “the Jewish Nobel.” Kraft met with Israeli Prime Minister Benjamin Netanyahu at the Prime Minister’s Office in Jerusalem.

“I believe we can use this platform of social media to make a genuine and lasting impact on the rising tide of hate,” Kraft said, “especially against our people.”

Kraft presented Netanyahu with a signed Patriots helmet and he and his delegation posed for a joint picture alongside the team’s Vince Lombardi Super Bowl trophy. Netanyahu said: “Israel does not have a more loyal friend than Robert Kraft.”

The 78-year-old Kraft has made at least 100 trips to Israel, starting with his honeymoon with his late wife. “These are most disconcerting times to the country I love so much,” he said.

Last year’s winner, Natalie Portman, snubbed the event because she did not want to appear to be endorsing Netanyahu.

U.S. Supreme Court Justice Ruth Bader Ginsburg has received the foundation’s lifetime achievement award, the only person to be so honored.

AP reports: “Dozens of VIPs showed up to the invitation-only event, hosted by comic Martin Short, including 15 active and former Patriot players who accompanied Kraft to Israel, as well as leaders of major Jewish organizations, top business and political figures and the prime minister.”

A Democrat, Kraft is also friendly with President Donald Trump.