You Are Here: Home → Advocating for Israel pays well: Salaries of nonprofit heads 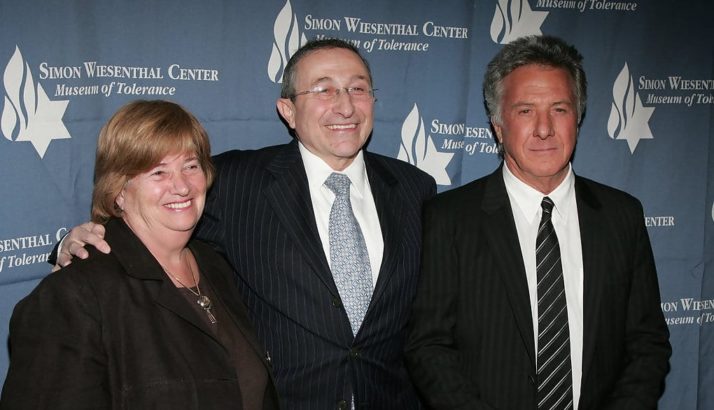 Rabbi Marvin Hier (center) and his wife Marlene with actor Dustin Hoffman at the premiere of “Against the Tide” on February 4, 2009 in Los Angeles. The Hiers and their son receive total annual compensation of $1.4 million.

Heads of nonprofits that support Israel receive compensation in the hundreds of thousands of dollars up to, in a few cases, over a million dollars.

Politicians reaping money from the Israel lobby (e.g. Tom Cotton received close to a million dollars from the Emergency Committee for Israel; Haim Saban and his wife donated $11.5 million to pro-Clinton super PACs, along with large sums to the Clinton Foundation) are not the only ones to benefit from supporting Israel.

Executive directors of nonprofits that support Israel receive compensation in the hundreds of thousands of dollars up to almost $2 million.

The Forward recently compiled a list of their earnings. It reported that Marvin Hier of the Simon Wiesenthal Center received $818,148 and that his spouse and his son also work for the center, giving them an annual total $1.4 million.

According to the Forward the Hiers were not alone in surpassing a million dollars compensation – in 2016, the CEO of the Jewish Community Federation of Cleveland received compensation of $1.3 million, and in 2014 the CEO of Boston’s Jewish federation received almost $2 million.

Below are some members of the Forward’s list for 2016

(All the individuals below head up organizations that spend part or all of their time in activities supportive of Israel):