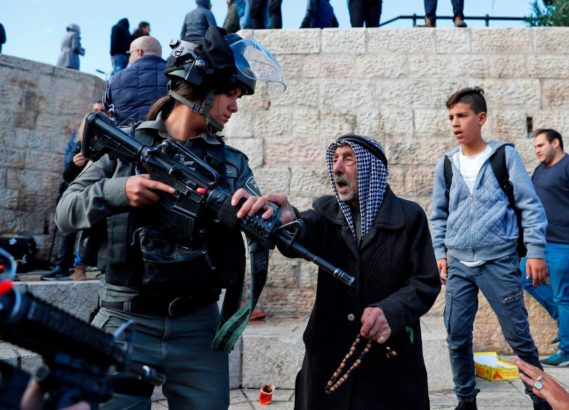 Image taken in the Old City of Jerusalem

Demonstrations continue, casualty numbers are on the rise since Trump’s announcement on Monday, recognizing Jerusalem as the capital of Israel.

The Palestinian Health Ministry reported that Israeli soldiers have killed four Palestinians, and injured 1,178 others, since Monday evening, after the U.S. President Donald Trump made his illegal recognition of occupied Jerusalem as the unified capital of Israel.

The Ministry stated that the soldiers have injured 1396 in the occupied West Bank, including Jerusalem, adding that 33 Palestinians were shot with live fire, 323 with rubber-coated steel bullets, 998 suffered he effects of teargas inhalation, and 24 others were beaten up by the soldiers, suffered burns from Israeli fire, or were rammed by army jeeps.

Eighteen Palestinians were shot with gas bombs, while 83 Palestinians have been hospitalized, including 15 from Jerusalem.

In the Gaza Strip, the soldiers injured 382 Palestinians; 85 of them with live rounds, 14 with rubber-coated steel bullets, 235 suffered the effects of teargas inhalation, 21 were shot with gas bombs, 12 suffered burns in addition to cuts and bruises, and fifteen others were injured after the army bombarded several areas in the coastal region.

259 of the wounded Palestinians were moved to hospitals for treatment; some remained there due to moderate or serious wounds, including a six-month old infant.

It is worth mentioning that, on December 6, 2017, a Palestinian child, Mohammad Saleh Abu Haddaf, 4, died from serious wounds he suffered on August 8, 2014, when Israeli army drones fired missiles at his family’s home, and several nearby homes, in al-Qarara town, north of Khan Younis, in the southern part of the Gaza Strip.

UPDATE: Late Tuesday night dozens of Israeli soldiers invaded Zubeidat town, north of Jericho in the occupied West Bank, and fired many gas bombs, concussion grenades and flares and stormed and ransacked many homes in the town. Medical sources said an elderly woman, identified  as Hamda Zubeidat, 60, died of a heart attack when the soldiers hurled concussion grenades near her, just as she opened her door.

For a list and specifics of all Palestinians and Israelis killed by the other side since 2000 see Israel-Palestine Timeline.

(Sometimes there is a time lag in posting the latest fatalities while the details are being researched.)

The death of Atef al Maqousi